Every country has something it's famous for. Whether that's a skill or industry, a product or type of food, a new world map created by DogHouseDiaries showcases each country's claim to fame.

"I can barely remember how we conceived of the map. It was a Tuesday, and I remember making a sandwich, but everything after that is a blur," Rafaan Anvari, one of the masterminds behind the map and a founder of DogHouseDiaries, told The Huffington Post via email. "I think we just decided that we wanted to make an interesting research based map and then tried to figure out what information would be interesting to know." 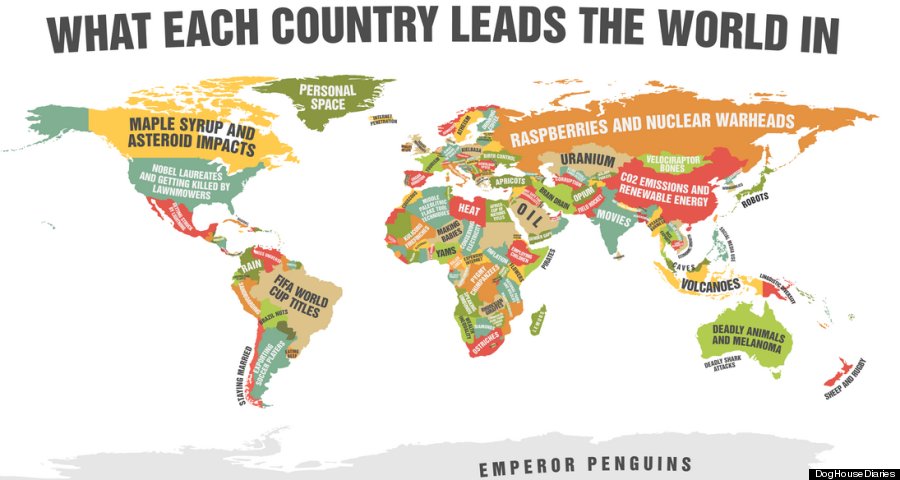 America tops all other countries for number of nobel laureates and most fatalities caused by lawnmowers, which came as a shock to Anvari.

"The most surprising finding, to me, is the number of lawnmower related deaths we have in the U.S. Probably just a product of living in a large developed country and having the luxury of owning a home with a lawn that requires mowing, but still, I think it's a perfectly preventable cause of death. We should try to get that number down," he said.

The creators of the map, William Samari, Ray Yamartino and Anvari, gathered their research from a heap of sources, a process that took 3 or 4 months to complete, according to Anvari. They chose a mix of offbeat and serious categories to make the map the glorious gem that stands before us. But there was just one category that the trio wish made it to the final list.

"I think I speak for the group when I say, I'd want my country to be known for most hover-boards. Mankind has really dropped the ball on this one," Anvari said.

Take a look at the full map (above). For a better look at the countries in small print, see the whole list here.