Half of Guatemala's population is under 19-years-old, making it the youngest population in Latin America, and analysts point to their anger with the current regime -- and use of social media -- as instrumental is the political upheaval there. Youth Radio board member María Emilia Martin currently runs a non-profit in La Antigua, Guatemala devoted to the practice of independent journalism in the public interest. She's sent us this dispatch from Guatemala during the historic political change currently underway. 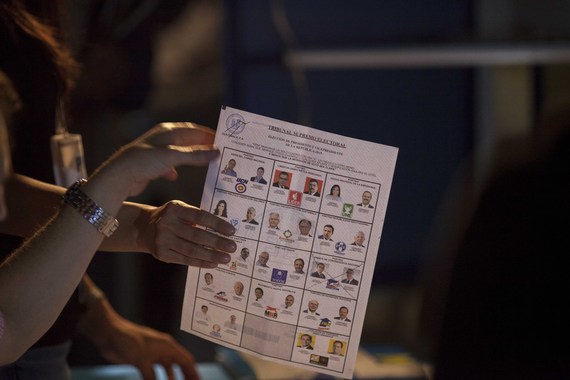 Guatemalans started off this week knowing their votes in last Sunday's elections had resulted in the surprise first place finish by comedian, actor, and television celebrity Jimmy Morales of the UCN Party, who led a crowded field of 14 candidates with nearly 24 percent of the vote. Morales had run as the "outsider candidate" --"ni corrupto ni ladron", "Neither corrupt nor a thief" was his campaign slogan," which appealed to a population tired of government corruption that has allegedly reached the highest levels of government. "Guatemala wants change and to not be governed by people with dark pasts," he said after voting near Guatemala City on Sunday.

Because neither Morales nor any other candidate obtained over 50 percent of the vote, Morales will face a still undetermined second place vote getter in a run-off election on October 25. Only 5,544 votes now separate the second and third place candidates.

With 98.32 percent of the vote counted, Morales' share is 23.9. Former first lady Sandra Torres (divorced from former president Alvaro Colom) of the UNE party, now holds second place with a 19.7 share, while Manuel Baldizon of the LIDER party, is in third place with a 19.6 share of the vote. Until a few months ago, Baldizon was widely considered the favorite to win these elections. But with popular indignation in the wake of revelations of widespread government corruption, a fed-up populace began to see Baldizon as the candidate of "mas de los mismo" -- "more of the same."

A magistrate of the Supreme Electoral Tribunal, Julio Rene Solorzano told a packed press conference on Monday that there is no date set for an announcement of a final and official vote count. Solórzano said this is the first time in the history of elections in Guatemala that the vote count between top candidates has been this close. Guatemalan law does not allow for a re-count, per se.

Nearly seventy percent of the country's 7.5 million eligible voters participated in Sunday's "fiesta civica" - the "civic celebration" and vote that came in the wake of months of citizen indignation regarding government corruption in the way of accusations that top government officials, including the President and Vice President were involved in a multi-million dollar bribery ring involving the country's customs department. The vote culminated a heady and turbulent week in which now former President Otto Perez Molina, who claimed innocence in the bribery scandal, lost immunity from prosecution, and soon resigned, the first Latin American President in recent history to do so.

Many political analysts attributed the historic political turn of events in Guatemala to weeks of peaceful citizen activism. So even though many voters expressed skepticism about their choices in this voting process, as most candidates had been put in place before the corruption scandals broke, many Guatemalans felt it their duty to cast their ballots.

"Seguramente voy a votar," said 19-year-old Arturo Arias of Antigua. " Of course I'm going to vote. But I am not happy ... that there are not very good choices in this election. I don't really have much hope." Voters like Arias, between the ages of 18 and 25 represent the largest segment of Guatemala's voters, 26 percent. For all his skepticism, Arias said, "I am so happy for what's taken place in the last few months," referring to the democratic opening which has been key in bringing down the president and vice-president. "I hope this change continues forward so that we can eventually have the kind of Guatemala we really want."

Sonia Lopez y Lopez, a 41-year old indigenous weaver from a small aldea near the community of Santiago Zamora, said she was excited to be able to vote for "a new kind of leader, one that will be capable and responsible..." But just a few hours before she voted, she still had no idea for whom she'd cast her ballot. "There's a woman running, maybe she'd be good." Perhaps it was this kind of thinking that has so far given former first lady and second place contender Sandra Torres an edge over male contenders. In a largely machista society like Guatemala, women make up only a small percentage of elected officials.

Meanwhile, the magistrates of Guatemala's Supreme Electoral Tribunal, the government entity in charge of overseeing the election process, congratulated themselves on their "Mission Accomplished" in a press conference on Monday, and on the highest turnout for any election since the country returned to democracy in 1985. Still, photos showing burned-down polling places, burning ballot boxes, road blockages, and violent confrontations between opposing party members in rural areas around the country that have left at least one dead, told a different story of Sunday's elections. Political analyst Manfredo Marroquin, head of the democracy watchdog organization Accion Ciudadana, a branch of Transparency International, said that while this election has so far gone fairly smoothly compared to past elections, "the problems we are seeing are in the rural areas, in the municipalities where the political parties that hold power do not want to give it up."

In many of these rural municipalities, where there are no term limits, mayors and other local officials continue to be re-elected time after time, many times using voter manipulation, force and violence to assure their elections. "There is a high rate of corruption here, with no investigations taking place into the system at this level," says Marroquin. "For this situation, the citizenry is not to blame, nor the Supreme Electoral Tribunal -- it's the political parties that are to blame."

As the Electoral Tribunal studies the results from some 300 as yet uncounted and contested polling places to determine the second candidate for the Oct. 25 run-off , the magistrates called on all government officials and Guatemala's political parties to keep their followers in line and prevent more violence around the country.

Meanwhile a judge in Guatemala City on Tuesday ordered former president Otto Perez Molina to be held without bail while awaiting trial on corruption charges.

Youth Radio Board Member Maria Emilia Martin currently directs the GraciasVida Center for Media, a nonprofit organization based in La Antigua, Guatemala and devoted to the practice of independent journalism in the public interest (www.graciasvida.org). For the last eight years, the Center has worked to improve the working situation for rural, provincial and indigenous journalists in Guatemala, Bolivia, and Nicaragua, as well as to improve the coverage of Central America on U.S. public radio. An award-winning U.S. public radio journalist for over two decades, Martin developed ground-breaking programs and series for public radio, including NPR's Latino USA, and Despues de las Guerras: Central America After the Wars. She's the recipient of Fulbright and several Knight Fellowships, including the John S. Knight Professional Journalism Fellowship at Stanford University, and the Reagan-Fascell Democracy Fellowship awarded by the National Endowment for Democracy. Martin has won over two dozen awards for her work covering Latino issues and Latin America.