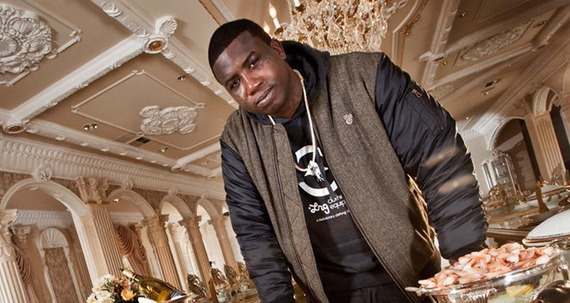 Many people know who Gucci Mane is, his #FreeGucci campaign has made him a pop culture icon. Rightfully so, I became a fan of Gucci Mane when Myspace was still used in everyone's vocabulary. This was around 2009, and he was blowing up. Everyone I know had a Gucci Mane song as their profile song, my personal favorite was "On Deck". Gradually, I witnessed Gucci Mane's rise to stardom amongst the underground, to me he is the most consistent mixtape rapper. He has all eyes on him, but continues to dwell underground. He has enough leverage to become mainstream like Wiz Khalifa and Nicki Minaj, but that's not his priority. His songs such as "Wasted" and "Lemonade" could have easily cracked Billboard Top 20, they were the songs of the summer. Due to Gucci's keenness to the streets, he has chosen not to make 'mainstream' songs and continues to be gritty and raw. This has been both a good and bad decision.

Gucci Mane is a pop culture icon, but yet he can't seem to sell albums. He has forever been immortalized by the slogan Free Gucci, but it seems like Gucci is just a 'fad'. A lot of people popularized that slogan, and in many ways it stripped Gucci of his humanity, who is the human behind Free Gucci? Many people liked the idea of the slogan, and in turn forgot who Gucci Mane was. It became a slogan that was cool to caption or to write, rather than to fight for. Many people don't even know why Gucci Mane went to prison in the first place.

Gucci Mane is very street from the way he talks and to his demeanor, many remark how intimidating and scary he is. No question about it; Gucci Mane has had constant quarrels with the law throughout his life, dating back to 2001 when he was arrested on cocaine charges and sentence to 90 days in county jail, the legal battles seem to plague his life and define his career. In 2013, Gucci Mane pleaded guilty to possession of a firearm by a convicted felon. He was scheduled to be released in late 2016. Luckily, he was released last week.

While in jail, Gucci Mane released many songs. You cant deny his focus is music, but the thing is Gucci Mane is a mixtape rapper. Yes, he has many fans and since his jail stint he has amassed even more, but the truth of the matter is Gucci Mane simply can not sell albums. He doesn't appeal to a wider audience due to his ruggedness. His #FreeGucci campaign made him a pop culture icon, but it didn't translate to his music success. I haven't heard a single Gucci Mane song on the radio since his 2010, but I have seen plenty #FreeGucci shirts and references. Simply put, mainstream likes the image of Gucci Mane, but not his music. Why don't they like his music? Cause Gucci is raw, he talks about the streets of Zone 6 (Atlanta) and doing 'hood' things. Something that is not relatable to the typical suburban kid. That scares many people, he doesn't have Katy Perry singing a hook and doesn't do electric beats, he is a trap rapper, the trap god. Do you think Gucci Mane cares? Not at all, he recognizes that he isn't mainstream due to not having a 'machine'. In many ways, I applaud Gucci Mane for being one of the few artist who has decided he doesn't care to produce mainstream 'pop' songs. Many black artist have that pressure, and most of them have succumbed to it. Not Guwop, he has always kept it real and 100.

In a letter to his fans in 2015, Gucci Mane says, "The difference between me and the average entertainer is they dream of signing to a major label so they can have this giant machine push them and propel them to stardom," he writes. ""My reality is I am all I got. I am the machine behind me. The streets signed me and the Trap named me God," Gucci Mane could have easily transcended his street anthems to global success, but that's not him. His counterparts like Nicki Minaj and Waka Flocka have seen worldwide success due to the fact they chose to make music that appealed to a wider audience.

Long before Nicki Minaj was selling out stadiums and selling millions of albums, she was a vicious rapper from New York just hoping for her big break, eventually she started working with Gucci Mane and they released popular songs like "Slumber Party" that blew up on Myspace around 2009. Nicki was raw and very much hood, as she rapped songs like "Itty Bitty Piggy",this song became her signature song. She wore bangs with pink streaks and could go toe to toe with any rapper. She was that confident. Somewhere between then and now, Nicki realized she needed mainstream success, so she shed her hood anthems and opted for songs such as "Superbass" which capsulated her to stardom. Of course, Gucci Mane could have latched on to the success of Nicki, but Gucci chose not to and continued releasing mixtapes and being an underground artist. Around 2009, he released an album The State vs Radric Davis, this album produced his career defining hit sing, 'Lemonade'. Sadly, to date the album has only sold 424,000 copies. He released another album, The Appeal Georgia's Most Wanted, it has sold 150,000 copies to date since 2010. His latest album, Trap House III released in 2013, sold only 2,300 copies first week. While his counterpart Nicki Minaj has sold millions of albums to date. There's a constant pressure for black artist to 'whitewash' their music.

Unknown to many, Wiz Khalifa has actually been a rapper since 2005. He didn't gain much popularity until 2009 when he began Taylor Gang, for people present during 2010, Taylor Gang flooded the internet with people making clever slogans revolving around Taylor Gang or Die. During this time Wiz Khalifa released his highly anticipated mixtape Kush and Orange Juice, it immediately became a favorite of many people. The mixtape is one of his best, but still at that time he dwelled through the underground and was a fan favorite on Tumblr. Personally, I feel like some of the songs on Kush and Orange Juice deserved to be radio hits, but it didn't appeal to a wider audience. Wiz had a niche fanbase of hipsters. I guess Wiz was tired of the obscurity of being underground, so he continued to push for mainstream success with songs such as "Black and Yellow" and " Roll Up". Finally in 2015, he released "See You Again" for the Fast and Furious 7 soundtrack. We couldn't escape this song everywhere we went, supermarkets, and even clubs. "See You Again" became a worldwide hit and Wiz Khalifa became a household name. Wiz Khalifa chose to go mainstream, something Gucci Mane has always avoided, with going mainstream, the content of his music of course changed. The songs were more gimmicky now and had infectious pop beats. Wiz Khalifa decided to make himself more 'appealing' and 'softer'. A big contrast to his songs such as "In The Cut" and "Pedal To The Medal".

Gucci Mane is very rough around the edges, many people like the idea of him, but don't like him. Truth of the matter is, Gucci Mane will never be mainstream due to the fact that he makes white people uncomfortable due to his subject matter. Gone are the days where hard-core rappers were revered like Tupac and Biggie-- now a days people want rappers that are soft, the rise of rapper Drake has solidified this notion. Gucci Mane became a trending topic with over millions of tweets celebrating his new freedom, but how come he can't sell albums that easily? It seems like he does have a fan base, that's if you count everyone who tweets or hashtags #FreeGucci. But in actuality, people don't like the fact that Gucci is so 'hood'. He simply can't sell records because he decided a long time ago he wasn't going to sell out, maybe that has done him more harm than good. I respect Gucci Mane's decision because it shows that he is strong enough to not be wavered by money or popularity. Artist work in an industry where your sales determine your worth. Regardless of how many records he sells, Gucci Mane has the respect of many people, he is a street legend and he will forever be immortalized as such. He has curved out a niche fanbase that will always be loyal to Guwop.