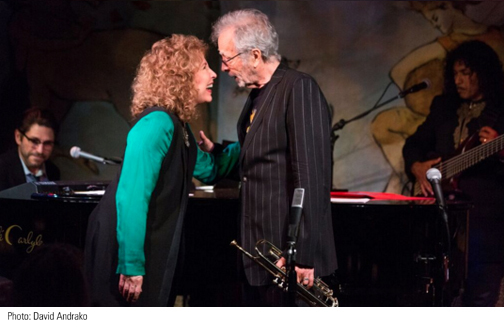 Herb Alpert kept checking in about his pin stripes, asking a rapt audience, some of whom traveled from Florida just to hear him perform at the Café Carlyle for opening night this week: "Was I wearing this suit?" Like a woman who does not want to repeat an outfit for the same group, he joked, told stories, and played that sweet trumpet, bringing in the crowd for an entertaining night of his greatest hits. Beside him was his wife of 42 years, Lani Hall, whose crystalline vocals in Portuguese and Spanish perfectly put everyone in the Tijuana/ Jobim mood. "I love it when she talks to me in Yiddish," he laughed, as their ensemble with Bill Cantos on piano, Hussain Jiffrey on a six-string bass he can play like a guitar, and Michael Shapiro on drums created a musical dialogue all their own.

"That was sick," said Alpert in praise of Bill Cantos' scat for Cole Porter's "Begin the Beguine"/ "I've Got You Under My Skin." Having performed "A Taste of Honey" with the Tijuana Brass on The Ed Sullivan Show in the 1960's, he's been on the music scene for decades and co-created A&M records, and as he claimed, they could have had The Beatles. Their rendition of George Harrison's "Something" was homage to the man and his melody and lyrics, qualities Alpert admired most. Looking to the audience for questions, he fielded queries about performers who's meant most to him, like Stan Getz, and musicians of today: Jacob Collier, Bruno Mars, and Chris Botti.

As the audience, including Robert Redford, cheered for each medley, with anecdotes about giving "Close to You" to The Carpenters, and a segue to Carole King's "Up on the Roof," "The Fool on the Hill," "The Look of Love," and so on, many components of the evening felt improvised within the context of a well-honed music genre. Guaranteed: this is a show you may want to see more than once.