Ten years ago, LEAP Legal Software had grown slowly to only 27 employees its first 14 years in business. Today it has a team of 300 and generates $50 million in annual revenue. LEAP accelerated its growth dramatically by tying its team's pay to achievement of its quarterly goals.


At LEAP legal software, Executive Chairman Richard Hugo-Hamman doesn't worry about the Millennials on his team getting bored and jumping ship. They change jobs frequently, because the company has been growing so quickly.

"I have a global manager who is 25 years old," says Hugo-Hamman. "She is running a team of 27 people around the world. One of the great things when you are scaling a company so quickly is you have tremendous career opportunities for young people."

This wasn't always the case at LEAP. Founded in Sydney in 1992, the company, which makes case management and legal accounting software for law firms of one to 40 people, had only grown to 27 employees by 2006.

It put its scale-up into high gear when it began holding quarterly strategic planning sessions in 2006, at the suggestion of a coach. At these sessions, the company set five top priorities. Every employee, including the receptionist, has five main objectives that help move the needle toward these goals.

Since then, LEAP Legal Software has seen explosive growth. The firm now employs about 300 people in the U.S., the U.K. and Australia--markets where it sells its offerings--and generates $50 million per year. Meanwhile, it has spawned InfoTrack, a 400-employee technology company with a software-as-a-service platform that provides intelligent search and automated workflow for legal and other professionals, generating $150 million in annual revenue, and other strategic subsidiaries. In combination, the companies employ about 850 people.

Performance-based compensation
About two and one half years into setting quarterly goals, LEAP Legal Software realized employees would be more motivated to hit them if the leadership team's compensation was tied to this. "In continually trying to improve the company, executive performance is the single most important thing I look after," says Hugo-Hamman.

LEAP created a system where the target is to have 50% of each individual's pay as a base wage, and the rest as a variable bonus. "This has been the game changer for us," says Hugo-Hamman. "We linked the strategic plan model to executives' and managers' remuneration."

Last year, one quarterly goal was to get LEAP software onto the Amazon East Coast server in Virginia. Thirty-two people in the company had a top five priority related to that outcome. They achieved the goal on time.

Because most employees at the time had started out with a base wage and received traditional raises, LEAP phased in the new approach gradually. For employees hired with a traditional salary, LEAP has ceased traditional annual raises and increased the percentage of their pay that comes from performance bonus, without increasing their base pay. "The goal is to get to 50-50," says Hugo-Hamman.

New hires have started out with the base wage/incentive arrangement from the outset. "We tell them this is the way we pay people," says Hugo-Hamman. "We then gradually move them to 50-50 arrangements."

To provide further motivation, both managers and executives can use their performance incentive to buy shares in the company. Today, there are more than 130 employees who are shareholders.

Clear accountability.
The beauty of LEAP's system is that everyone feels it if the company makes a mistake and misses its goals. "It is brutal," acknowledges Hugo-Hamman. "When the company fails on its top five, that is going to cascade down to a lot of people."

But this harsh reality leads to smarter decision-making. "You only need to have that happen once every two years and everyone makes sure you don't fail," says Hugo-Hamman.

That doesn't mean there are no missteps. The company sets lofty goals for each quarter. Hugo-Hamman estimates that the company has achieved four or five per quarter. "Sometimes we fail on pretty big things," he says.

Individuals self-assess whether they have met their own top five goals. "Every now and then someone tries to claim a pass," says Hugo-Hamman. However, their verdicts are delivered in a public forum, which keeps them honest.

"Every department has huddles for the senior executives," says Hugo-Hamman. Given the time zones, he says, "I have huddles at the weirdest times of day."

Team members, driven by the desire to hit their goals and max out their pay, don't balk at dialing in at unconventional times. "The dynamic teams we create to meet our top five become totally committed to each other," Hugo-Hamman says. "They don't want to let themselves or each other down." 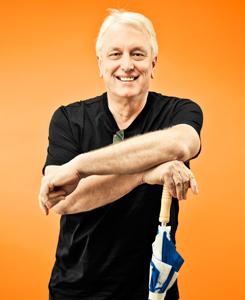