Sometimes, no matter how clean you keep your house, you can still have a roach problem. And when an exterminator delays an appointment, you become desperate for ways to get rid of roaches. Here are a few common methods that work...and a few commonly-suggested methods that don't work. 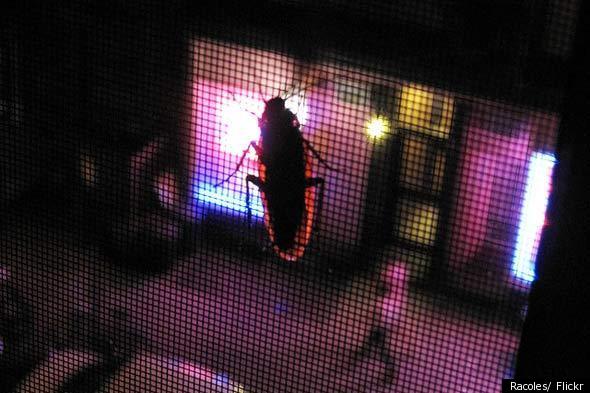 Immediately, I called an exterminator.

"But I have roaches now," I pleaded.

Repeat this scene 8 times. Was there an exterminator convention coming up? An exterminator group vacation? (I picture a group of them in bathing suits and cleaning gear.)

The answer to that mystery wasn't as fun.

"You on Green Street?" The last exterminator asked. I confirmed.

"Yeah, big problem on your block. They're doing a teardown of a building and the roaches and rats are migrating."

First of all: Rats. Second of all: Migrating. Now the roaches were like the Joad family, roaming the streets with handkerchiefs tied to sticks, their belongings in tow. I had no sympathy.

The exterminator agreed to come in a week and a half, until then, I was on my own with my new roommates.

"Just be sure not to smash 'em...if you do that, then others come out and eat the remainders."

It took me two days to regain my appetite after that pearl of wisdom.

In an attempt to make my life easier (or at least less horrifying), I decided to put up a fight with the roaches. I couldn't necessarily go the chemical route, because I have dogs and a cat who seems to be doing her best to be the first animal to win a Darwin award. Instead, I went the homemade, natural route. All I had to lose were roaches.

Here's what worked...and what didn't:

-Coffee grounds: Writers live on coffee, so I had plenty of exhausted grounds to experiment with. My assumption is that the acid in coffee acts as a poison. In a few days, my bathroom smelled like an airport Starbucks and there was no evidence that the roaches went near the traps. The weight of the grounds was the same and there were no dead roaches in the traps. But I also hadn't seen any roaches in the bathroom since. Bottom line: Might be useful as a repellant, especially outdoors.

-Bay leaves: Crushed and left in discreet corners, bay leaves allegedly scare off roaches through scent. I weighed an ounce of bay leaves in a small cup, placed it on top of a cabinet, then returned to the trap a few days later. Still an ounce. And I spotted a roach near it. Bottom line: Does not work.

-Soapy water: Allegedly, a mix of soap and water "puts roaches to sleep." I made a mix of 2 tablespoons dishwashing liquid mixed in 1 quart water, and chased after a sprinter as if it was an interspecies Olympics. The solution did not seem to slow the roach down, nor kill it. Bottom line: Does not work.

-Citrus Floor Wash: A neighbor recommended washing the floor with juice of 4 lemons in 1/2 gallon of water. The thinking is that roaches hate citric acid. But, this did nothing except make my home smell like lemonade. Bottom line: Does not work.

-Borax + Sugar: The exterminator recommended this mix (3 parts borax to 1 part sugar) because the borax acts similarly to commercial roach killing sprays by dehydrating the pests' exoskeleton. The sugar just acts as a bait. Though borax is a pretty safe product, I erred on the side of caution and sprinkled the mix only in high up places. A few hours later, there were dead roaches galore. Bottom line: Amazingly effective.

-Fabric softener sheets: I saw a roach scurry to the sheet, then slow dramatically. And then get stuck to the sheet. It did not die. Bottom line: Not really effective.

-Fabric softener + water mix. Inspired by the way the fabric softener sheet slowed down a wayward roach, I decided to make a solution of fabric softener and water...and got my spray bottle. The solution was pretty thick, 3 parts fabric softener to 2 parts water. A roach sprayed in this stuff immediately stopped and keeled over. (Mental note: Switch to a natural fabric softener.) While effective, cleaning up what is essentially diluted fabric softener is a pain. Bottom line: Effective, yes. Efficient, not really.

-Cucumber trap: Another folksy suggestion by a neighbor was to place fresh cucumber peels inside of an empty aluminum can. The explanation was that the cucumber will react with the aluminum to create a cloud of stink that kills roaches. And if roaches could laugh, it would be because I thought this could actually work. Bottom line: Does not work.

A week and a half later, the exterminator arrived. He examined the house and declared that I did not have a roach problem. So, a success. He still charged me for a consultation, though.

But at least I didn't have rats.

CLARIFICATION: An earlier version of this post stated that boric acid should be mixed with sugar. The ingredient is actually borax.