Could iDreamBooks, a new review aggregation site, be the Rotten Tomatoes for books?

Determining what to read can be tricky, and we each have our go-to methods: Scouring the new release shelves at stores, consulting The New York Times' bestseller list, clicking "You May Also Like" suggestions on Amazon.

Word-of-mouth recommendations reign supreme, as evidenced by "50 Shades of Grey"'s sudden surge of sales before the book was even sold to a major publisher. This phenomenon seems less common in the film industry, possibly because movie reviews are easier to quantify. There are star ratings and the easy-to-consult site, Rotten Tomatoes, to guide viewers towards the most critically acclaimed flicks.

iDreamBooks, a site openly inspired by Rotten Tomatoes, has created a system that aims to aggregate and streamline book reviews, giving new releases from the big six publishers (Hachette, HarperCollins, Macmillan, Penguin, Random House, and Simon & Schuster) a percentage rating. Like its popular film equivalent, the iDreamBooks team decides whether a certain review is positive or negative using both automated and manual techniques, and compiles the ratings to determine a book's critical merit.

It is the first site of its kind, although it's comprable to Goodreads, which gives books a star ranking based on crowd-sourced comments rather than professional reviews.

"This is a challenging endeavor because there are a lot more books that come out than other verticals like movies," co-founder Rahul Simha told The Huffington Post. "And the release date of these books isn't very standardized (most movies tend to get released on Fridays, for instance). Also, the lack of star rating makes it tough. Because of all these reasons, I think others haven't done it before."

We can think of a few other reasons why the project may be tricky.

The site gives Danielle Steel's romance novel, "Betrayal," an 87% ranking, and Téa Obreht's National Book Award nominee, "The Tiger's Wife," only 67%. This is likely because book reviewers function differently than movie reviewers: Because of the quantity of books produced each year and the time it takes to read them, it's uncommon for a reviewer to cover every big hit. Reviewers have fortes. There are a slew devoted solely to romance or sci-fi or fantasy. Even the big-wigs like Michiko Kakutani of The New York Times and Michael Dirda of The Washington Post ("the most well-read man in America") are choosey. Movie reviewers, on the other hand, are less-so; Rogert Ebert recently covered both "Ice Age Continental Drift" and "Elena," a film he describes as "Dostoyevsky meets film noir." Therefore comparing E.L. James to E.B. White is like comparing apples to oranges.

Although iDreamBooks currently only features books by major publishers, they plan to expand to include smaller publishers and classics.

"We are working towards becoming the site people visit before buying a book," Simha says.

Check out these images of iDreamBooks and let us know what you think of the project!: 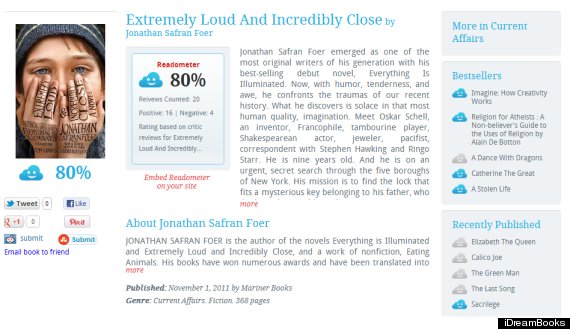 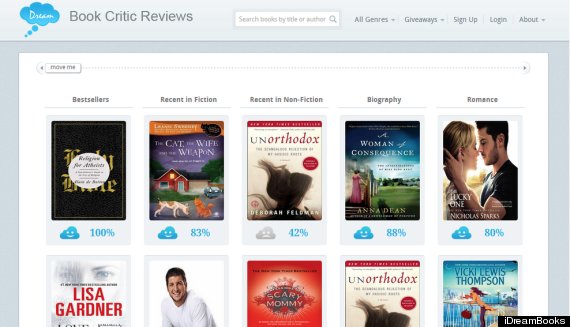