Strip Tina Fey of her Mark Twain Award. The prestigious comedy prize has been awarded to the wrong person. Not because Fey isn't funny -- at times, she is roaringly so -- but rather because she has failed, catastrophically, in creating a popular comedy that comments on American race relations in a manner appropriate for 2010. As a matter of fact, Fey may be the head of one of the most backwards projects in popular culture.

A few weeks ago, Fey was nominated for an honor named after one of our nation's most iconic writers, because "as a social commentator, satirist and creator of characters, Samuel Clemens [Mark Twain's birth name] was a fearless observer of society, who startled many while delighting and informing many more with his uncompromising perspective of social injustice and personal folly." 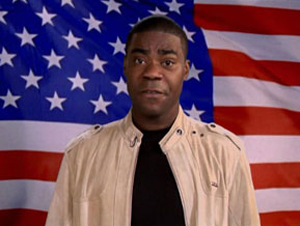 The only problem is that one of Tina Fey's greatest bodies of work, the juggernaut of a show known as 30 Rock, is terribly racist. The character of Tracy Jordan (played by Tracy Morgan) is an unsightly amalgamation of every nefarious trope about African Americans conceived of in the past two centuries in the history of our republic. Tracy Jordan is a caricature's caricature; his role in 30 Rock is almost as if the writers earnestly studied minstrelsy, and then went about extending the tradition in the most ambitious manner possible. Given that the show received a record-breaking 22 Emmy Award nominations in 2009 alone, this may be reason for concern.

Before the people who disdain cultural theory attempt to dismiss this analysis on the grounds that entertainment should be divorced from social critique, it should be noted: Fey's award is at its essence about social commentary, and it is inarguable that Fey's show deliberately and enthusiastically wrestles with issues of race, class, and gender. On race, she is firmly pinned under the weight of her own monster.

In 30 Rock, Tracy Jordan is the lead actor on a fictional live sketch comedy series depicted as airing on NBC, which is loosely inspired by Fey's experience as a writer at SNL. Tracy is the star of the show and a blight on its production. He is a "horny child" who needs "supervision" and "coddling," for he is "wired" to make trouble for everyone else who runs the show if left to his own devices. Only when alternately coaxed and controlled can Jordan be an actor; unattended, he only "acts out." Tracy, the only black protagonist of the show, is invariably depicted as a hyper-sexual, mentally challenged, violent, emotionally unstable, irresponsible man-child. Jordan is textbook: He serves as an exhaustive and educational catalogue of the feared and loathed qualities of "blackness" accumulated over the course of American history.

Tracy Jordan's character is so consummately "Other" that it's conceivable that the writers of the show were checking off boxes on a list of types of deviance. On various occasions, it is revealed that Jordan is illiterate; a negligent husband; prone to drug use; a negligent father; slothful; lecherous; prodigal; jealous; covetous; corrupt; corruptive; godless; anti-empirical; birth certificateless; tax evading; superstitious; gullible; uncontrollably foul mouthed; an exhibitionist; interested in all kinds of sodomy, including bestiality and pedophilia; dresses in drag; steals things; chronically succumbs to conspiracy theories; is tricked into thinking he's been launched into space; harms himself with an electric dog collar; dresses as a clown; and physically harms the handicapped. In his scarce moments of ingenuity, he only expands the meaning of taboo, by doing things like inventing the world's first pornographic video game.

While most of the shows character's are deeply flawed and have stereotypical elements, Tracy hosts a unique medley of racialized defects that places him on a different plane of existence than the others. Tracy's characteristics draw from the political history of slavery and segregation, and the accompanying cultural history of minstrelsy -- something all the other exaggerated identities of the show cannot draw from. In other words, his caricature has far deeper and more tragic roots than the others (unless someone can show me 200 years of a codified mockery of Irish people in popular comedy). It's unsurprising that the rate at which he is laughed at eclipses the rate at which he is laughed with. Tracy isn't as much a comic as he is a joke, he isn't as much a star as he is a centerpiece.

At his core, Tracy is a child. He is primal and he is poor at distinguishing between reality and fantasy, and thus always out of place on a set run by adults. In 80 episodes of 30 Rock, unlike the other multidimensional characters, Tracy is not praised for anything other than generating laughter, except maybe on one occasion: He gives an inspirational speech about his daughter's struggle with diabetes at a fundraiser. In an exceptional moment, Jack comes up to Tracy and says "Congratulations Tracy -- welcome to the grown-up world." Tracy then reveals that he lied about having a daughter.

The writers of 30 Rock are aware that they have diligently stuffed scores of stereotypes and racially loaded qualities into one character. It's likely that their response to the claims of this essay, if they took them seriously, would be that the character is entirely ironic, and that it is foolish and inherently unprogressive to look to a character as representation of an ethnic community. (There is also the argument that Tracy Jordan is an extension of Tracy Morgan, which is unpersuasive for many reasons.*) But attempting to play with stereotypes, ironically or not, is playing with fire. And playing haphazardly with the raging flame under the great American melting pot means you're likely to get scorched.


Stereotypes can't be be used ironically if they aren't subverted. Over the course of years of episodes, there are few -- if any -- moments where Jordan's aracial soul might peep out from behind his patchwork mask of black tropes. The mask and he are indistinguishable; he is an authentic clown.

The only other black character with substantial lines on 30 Rock is named "Toofer" (you get two for one because he's both black and from Harvard). Toofer has a resoundingly minor role, but like Jordan, is also totally defined by his (lack of) blackness -- even named for his (lack of) blackness. Given that his defining characteristic is his intellectual prowess, it becomes apparent he is trapped in the wrong body -- he is "afraid of black people," and has enormous trouble communicating with Tracy. It is learned that he descended from a black Confederate soldier who harbored the fugitive John Wilkes Booth following his assassination of Lincoln. Connect the dots.

The tools and dexterity required to dismantle a stereotype must be proportional to the size of that stereotype. It follows that when dealing with ancient and colossal and hideous claims about a persecuted race, some very sophisticated utensils are needed -- and 30 Rock is laughably ill equipped for the task.

30 Rock fails two tests. The first test is to to ask if there is a forceful difference between past pernicious representations of a race and the contemporary one. In other words, does Tracy's embodiment of age-old stereotypes of the black community look meaningfully different from what Americans saw in antebellum minstrel shows or in Amos n' Andy in the 1950s? Intentions of writers are largely irrelevant in this test. Read about this tradition, watch it firsthand, and it's impossible to say they are dissimilar. Tracy, a black spectacle orchestrated by a team of white conductors, looks more like an homage to the legacy of minstrelsy than a disruption of it.

The second test doesn't require a historical grasp of latent trends in American comedy. In this test, a comic writer is required to interact with people of many different races, and even become friends with them. Once a writer acquires several close friends of a variety of racial backgrounds, they will experience the process by which unfamiliar ethnicities fade from exotic to banal, and realize that stereotypes are not simplifications or reductions of people, but rather, costumes that are worn involuntarily by those who are seen more often than they are heard. The main question of this test is: After de-exotifying people of color, do the racially-based jokes in the script retain their humor?

Labeling cultural artifacts as racially regressive is a complex exercise. Mark Twain was justifiably considered progressive on race because of the humanity of characters like Jim in his epic novel Huck Finn. Jim is gullible, effeminate, overly magnanimous, and more superstitious than the white child he accompanied down the Mississippi river, but his morality, intelligence, and centrality to the plot of the story represented an unequivocal attack on the institution of slavery and its legacy. It's fair to say Twain's text does more to challenge the racial norms of his day than confirm them. Where does 30 Rock fall in that dichotomy?

In her formidable collection of essays entitled Playing in the Dark, Toni Morrison argues that historically, imagined black identity has served as a critical space for white self-definition. Sort of the way a dark back drop in a picture can make the outlines of a light-skinned person more clear. When slaves were property, it makes sense that their identities were props . But this year in the U.S. a majority of people born will be non-white. In other words, we're a bit old for this. There's no need for banning all jokes relating to race, but is it really that hard to find characters in white-dominated casts who aren't defined by their non-whiteness? Playing in a way that doesn't reek of ugly traditions -- now that's seriously funny.

UPDATE: I've gotten some very interesting feedback to this essay. Due to extreme spatial constraints I was not able to address a number of elements that I wanted to, such as Dot Com and Grizz. If you're interested in continuing this conversation, then you can contact me using the info on my blog or leave a comment there at http://zeeshanaleem.wordpress.com/, where I intend to write a brief follow up essay addressing some of the challenging questions circulating. Many thanks to everyone here who has kept a civil tone regarding a sensitive subject.

UPDATE II: It's become clear that the label of "racist" has got people riled up in a way that was unintended. It's probably more useful to ask the question, "Is 30 Rock racially responsible?"

Editor's note: The headline of this piece has been changed from an earlier version that tended to overly exaggerate the argument being made.