The Denver Nuggets opened the free agent season by offering Carmelo Anthony a three-year contract worth $65 million. As of today, that offer has yet to be accepted.

While Melo considers whether he should take a large pile of money from the Nuggets, Tom Haberstroh gives us something else to consider. Specifically, Haberstroh wonders if Melo is really an elite player.

At first glance, questioning the elite status of Melo would seem foolish. Last season Anthony scored 28.2 points per game and posted a 22.29 Player Efficiency Rating (PER). Kobe Bryant -- the player many consider the greatest player in the game - only averaged 27.0 points per game with a PER of 21.95. If Kobe is the best, and Melo does more than Kobe, doesn't it stand to reason that Melo is at the very least an "elite player"?

Haberstroh says not so fast. His article requires insider access at ESPN.com, so I won't repeat everything he says. But I do want to highlight a few key observations.

First, Haberstroh notes that Anthony's scoring totals simply reflect his ability to take shots. When we consider shooting efficiency, Melo is only average. Furthermore, Haberstroh observes that Anthony -- relative to an average small forward -- doesn't offer much else.

Because this is an important insight, let me restate Haberstroh's observations. Haberstroh is arguing that scoring totals are a poor measure of player performance. A better approach is to consider shooting efficiency and the other factors that determine wins. And in considering these other factors, one needs to consider what one might expect to see from an average player at a player's position.

One should note that Haberstroh never mentions Wins Produced (a measure of performance introduced in The Wages of Wins in 2006 and utilized in Stumbling on Wins) in constructing his argument. But this argument is essentially the Wins Produced story. When we look at how offensive and defensive efficiency relate to wins, we see that success in the NBA is driven by shooting efficiency and factors that gain and keep possession of the ball (i.e. rebounds, steals, and turnovers). Assists, blocked shots, and personal fouls (what Justin Wolfers and Joe Price refer to as "help" factors) do matter. But not as much as the possession factors.

Once we understand what drives wins, we also have to note that position played also matters. Big men tend to get rebounds and not commit many turnovers. Guards tend to do the opposite. Consequently, in evaluating players one has to consider what an average player in the same position would offer.

With all this in mind, let's add even more numbers to Haberstroh's story. The following table looks at Carmelo Anthony's statistics -- per 48 minutes -- during the 2009-10 regular season. It also considers LeBron James (a scorer who collects the NBA's maximum salary) and Kevin Durant (another scorer who is well-compensated by the NBA). All three of these players are compared to an average small forward. 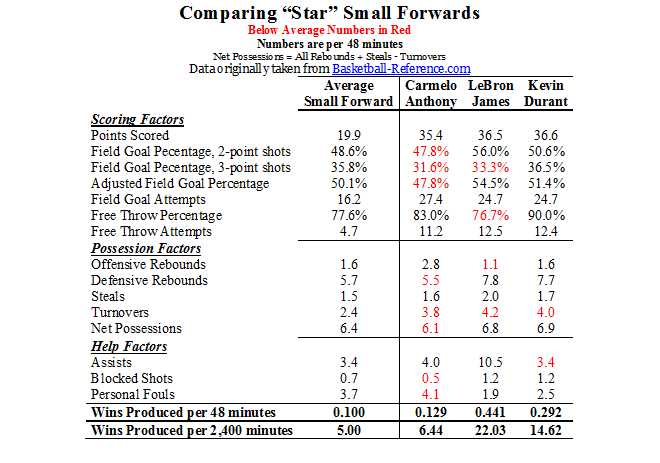 Kevin Durant essentially falls between these two players. Durant -- relative to Melo - is a more efficient scorer. But he is not quite as efficient as King James from the field. And Durant is not quite the same kind of passer as LeBron.

Despite these differences, the NBA's labor market argues that King James and Melo should be paid essentially the same amount. This is primarily because scoring dominates player evaluation in the NBA. This is seen when you study the determinants of a free agent's salary, the allocation of minutes by coaches, where a player is selected in the draft, and the voting for various awards (by the media and coaches). So although Haberstroh is correct in his evaluation of Melo, because Melo scores, Melo will get paid. All he has to decide is whether he wants to take the NBA's millions to play in Denver or in some other city (i.e. New York).

So is Melo max? In this case, Melo's stats -- when you look beyond scoring totals and PER** -- contradict the NBA's labor market. But it's the market that determines Melo's salary. So we can expect that when Melo eventually signs, he will be paid the NBA's maximum salary.

*-In Stumbling on Wins we observe that when a player departs a team, his field goal attempts tend to get taken by another player. In other words, all those shots taken by Melo would probably be taken by someone else if he wasn't there.

**- the problems with PER were discussed at The Wages of Wins Journal in 2006 .

The Wages of Wins Journal also offers more on this story.