A top executive at JPMorgan Chase told clients Monday that senators displayed "an unnerving ignorance of fundamental principles of market economics" during last week's Goldman Sachs hearing, that "Goldman was no more culpable in the housing debacle than Congress" -- and lest he didn't insult Congress enough, with "the financial reform debate...in the final innings, it's time for the grownups to step in."

The note, written by James E. Glassman, a managing director and senior economist at the $2 trillion bank, included shots at U.S. Senator Carl Levin of Michigan (a graph showing Michigan's job woes was titled "People who live in glass houses shouldn't throw stones"), the entire Congress, and pretty much everyone involved in the financial reform debate.

Glassman also notes that "financial reform legislation in its present form devotes a great deal of attention to issues that had little to do with the housing debacle and does little to put to rest the Too-Big-to-Fail issue."

"From the perspective of economic literacy, last week's hearings before the Senate's Permanent
Subcommittee on Investigations had to be, well, not memorable, or inmemorable (as infamous is to famous)," Glassman writes. "The hearings exposed an unnerving ignorance of fundamental principles of market economics by folks who have a hand in remapping rules of finance that will be with us for a while. Flip assertions about what is and is not socially valuable reflect a confusion about our market economy that is as fundamental as knowing that George Washington was the first president of the United States."

He then goes on to target Levin, the subcommittee's chairman:

"Maybe it's human nature to get self righteous about the mistakes others make when there are even worse problems in our own back yard that we should be tending to. Where are the hearings about the shameful story in the figure below. We can't blame this one on financial derivatives, sir. Michigan's problems began long before the first swap transaction was introduced in 1981. Bad luck? Sure, manufacturing comprises 20-25% of Michigan's economy.

"Except, wait a minute ... that's true for a bunch of other states as well, including Alabama, Arkansas, Idaho, Indiana, Iowa, Kentucky, Louisiana, North Carolina, Ohio, Oregon, South Carolina, and Wisconsin. And it isn't much different for Texas either.

"Many things are out of our control. But why has Michigan's economy been allowed to evaporate, while its business, labor and political leaders stand idly by, even as others with similar challenges, especially Wisconsin and Indiana, are getting Most-Improved-Player awards? Michigan must overcome a deeply held perception that it is genetically anti-business. Fair or not, no amount of advertising dollars can change that perception.

"This story is tragically ironic, because the Wolverine State once was the icon of business energy. The Tristate area is going to face the same future as Michigan, if it only knows how to raise taxes but not how to shrink its public-sector cost structure." 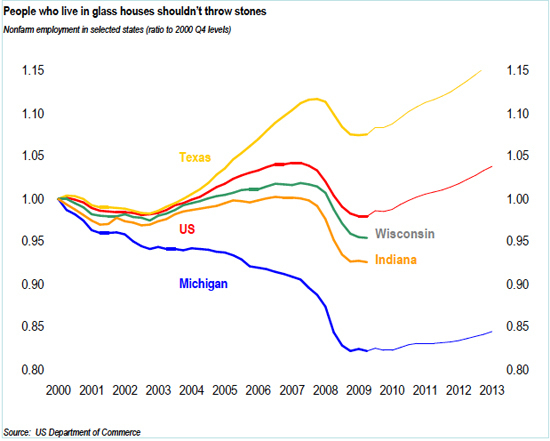 Next, Glassman goes after Congress for its apparent ineptitude in trying to craft legislation that adequately addresses the failures that caused the biggest financial crisis since the Great Depression:

"The low level of economic literacy is plaguing financial reform. Reform is dangerous--it produces unintended consequences--if we don't understand the connection between incentives and economic behavior.

"Folks may like to hear that someone else is to blame for the mistakes they made, but everyone knows--including those who bought houses far beyond what they could afford and then walked when the promise of endless capital gains died and including the investors who bought funky financial instruments that enabled the housing bubble out west and in Florida to inflate--that Wall Street isn't the only culprit in the housing debacle.

But Glassman has some ideas on how to fix the system -- ideas that have been proposed by some of the more liberal members of the House and Senate:

But as the debate winds down, it's time for "grownups" to step up, Glassman writes:

"Now that the financial reform debate is in the final innings, it's time for the grownups to step in. In its present form, financial reform will make credit more expensive and more difficult to obtain and businesses will find it more difficult to shed risk, harming the very people we are trying to help. Done right, reform will increase transparency, allow failing institutions to fail, and not stand in the way of financial innovation that has allowed those who want to shed risk to pass it to those who seek it, an evolution that has contributed to the US economy's robust performance in the past."

A JPMorgan Chase spokesman apologized for the memo in a note to Politico.

READ the full note below: