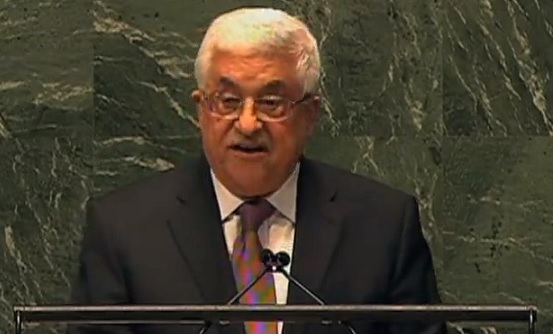 A few days ago, Mahmoud Abbas, President of the Palestinian Authority, announced that the Palestinians are no longer bound by Oslo accords. No one was surprised. His aides have been promising that he would drop a "bombshell" at his annual UN speech, and the content of that speech leaked to the media long before he made the actual statement. Brick by brick, a wall of isolation is built around Israel, and venomous anti-Semitism is spreading throughout the world.

Worse yet, each new crisis adds fuel to the flame of anti-Semitism and anti-Zionism. On September 19, The Jerusalem Post reported that "The Social Democratic mayor of Jena, Albrecht Schröter ... accused Israel of partial responsibility for the Syrian refugee crisis and called on Germany's foreign minister to 'show less restraint' toward the Jewish state."

Before we know it, we could be the world's most taken-for-granted culprit in the migrant crisis, Chinese economic slowdown, the (still) emerging conflict between Russia and the US in Syria, and who knows what else fate has in store.

But being the focal point of all this animosity puts us in a unique position to reverse it. How so? Everybody knows that when you join forces in order to achieve a common goal you increase your chances of success. What is less evident, though, is the value of unity in and of itself.

Yet, we Jews have a history of implementing unity as a means for social healing. The Midrash, as well as Maimonides, elaborate on Abraham's efforts to unite his fellow Babylonians after seeing their growing alienation. He wished he could bring unity to all people, not just to his tribe. When he left his homeland it was only because he was threatened with death. Yet, even as he travelled, he kept circulating his method for establishing unity among people, and those who joined him then are what we now know as Jews.

A few centuries later, another great leader, Moses, completed the task and sealed the making of our nation when we pledged to be "as one man with one heart." Thus, unity and love of others are the bedrock of our Jewish entity. Once we united, we became a powerful nation, crossed the desert, conquered Canaan, and made it our land.

But over time, our unity diminished, and so did our strength. Eventually, we opted for unfounded hatred instead of solidarity, and therefore lost our land for many centuries.

As long as we remain unaware of our unique ability to unite, we will remain insecure. Now we must remind ourselves that we have a registered patent on the world's most potent weapon, namely unity. Seeking strength in military and financial power, and political deftness will not make us more secure; they will only intensify the world's anger at us.

These days, the ability to maintain a sane human society depends entirely on our sense of solidarity. The all too common incidents of extreme violence, such as the shooting at Oregon's Umpqua Community College, the mass recruitment of ISIS (30,000 in the past twelve months alone, according to the NYT), and the fraudulent behavior of powerful corporations we have seen in the car industry, are only symptoms of the egoistic nature of today's society. Indeed, we are critically ill.

These circumstances make us, the Jews--patent owners of the cure--the most powerful nation on Earth because the fate of the world depends on our ability to implement unity, and share it with the world. This is not a moral duty; it is the only hope for the survival of humanity, and for our own survival, too.

And yet, instead of spreading unity, we are trying to prove to the world that we are just like everyone else. No wonder everyone is blaming us for everything that's wrong with the world. This is merely another way of saying, "You are causing the problems, so you can fix them." If you were terminally ill and sensed that someone had the cure for your illness, but would not share it, how would you feel toward that person? Because this is how humanity, by and large, feels, it will not stop hating us until it sees that we have stopped being its "foremost problem," as Henry Ford put it in his infamous book.

Therefore, as we, Jews, implemented unity among us in the past, now it is incumbent upon us to introduce it to the world. Humanity is holding us accountable for all its troubles; it feels dependent on us. Because only we can provide, should we choose to, a sustainable method for mending human alienation, we are responsible for the fate of the world.

These days, it is simply mandatory that we make it our top priority to rise above all differences and return to being "as one man with one heart." Our world is a tiny pond. When we unite, our example will ripple through it faster than a tsunami. And then, just as humanity holds us accountable for its woes today; it will be grateful for all its joys.