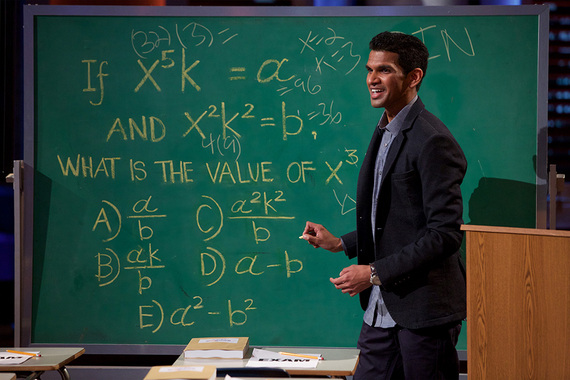 Earlier this year, Shaan Patel pitched his company Prep Expert, an SAT and ACT preparation institution, to ABC's Shark Tank panel. He sought a $250,000 investment in exchange for 10% of his company.

As they responded to his presentation, the Sharks had reservations about whether he'd be able to balance his tutoring business with his passion for medicine. Their concerns were not unreasonable. During his third year of medical school, Patel had decided to take a leave of absence in order to get an MBA from the Yale School of Management. Last month, he was finally able to complete that goal, but he plans to return to the University of Southern California in the fall to finish his last year of medical school.

Despite his doubled interests, however, Patel managed to land a deal for Prep Expert with billionaire and Mavericks owner Mark Cuban.

Growing up in a lower-class neighborhood in Las Vegas, Patel lived in a small-budget motel that his parents owned and operated. "At a young age I saw, like, drug deals and prostitutes," Patel told Business Insider.

He attended a high school in the worst school district in the nation, which had a 40% dropout rate. Having the odds stacked against him only fueled his motivation for success. He received a quarter million dollars of college scholarships from companies like Coca-Cola, Toyota and McDonald's. In 2007, he was chosen as a White House Presidential Scholar and had the opportunity to meet President George W. Bush.

Five years after he started the business, Patel remains astonished by its success. "Prep Expert almost started by accident. When I was in high school, I raised my own SAT score from around average to a perfect SAT score, which is achieved by .02 percent of students," Patel said. He gained acceptance into prestigious universities such as Brown, Northwestern, Johns Hopkins and Berkeley.

"When I was in college," he noted, "I really wanted to write a SAT prep book to help other students prepare for the SAT like I did in high school. I had a lot of unique methods and things that just weren't out there from doing hundreds of hours of preparation myself."

He submitted a book proposal to over 100 literary agents his senior year of college, but was rejected by every single one. "After five or six months passed, I had all this material I'd written for SAT preparation, so I decided to leverage that material and teach SAT prep courses in my hometown of Las Vegas, the summer before medical school." He also used $900 of his leftover scholarship money to build the website for what would become Prep Expert.

Patel only had eighteen students in his first class. However, after six weeks, those students saw an average score improvement of 376 points, which is almost unprecedented. Since Cuban came on board as a partner and investor, Prep Expert has spread to 20 cities across the United States. The internet has allowed the company to acquire a massive customer base. Online students are in a virtual classroom with instructors teaching a prerecorded lesson through a demand format. "High school students are so busy that we get why this is so popular. It's like watching Netflix -- but obviously not as entertaining," Patel said.

Cuban's involvement has been extremely beneficial, as he has helped create partnerships with affiliates, schools, nonprofits, and educational organizations in places like China and India. "That came with the Shark Tank exposure as well as Mark Cuban, and it just added a whole new level of credibility and professionalism to our organization," Patel said.

The Power of Diversification

As well as managing his company, Patel has written nearly ten books. His latest project is coauthoring a book about entrepreneurship with Mark Cuban.

"This is an opportunity that was presented to me by a young entrepreneur named Ian McCue, who is also currently in high school," Patel said. "Ian approached me about an opportunity to write a book for entrepreneurship for children, so because I communicate with Mark Cuban weekly, I told him I was interested in writing this book. Mark then put the proposition to me, saying, 'I'd like to help write a book too.'"

Patel said the book is targeted to students under the age of 12. "When people say, 'What do you want be when you grow up?' everyone says things like doctor, lawyer and engineer, but 'an entrepreneur' is not really something you hear," Patel said. "I want kids to understand what it is, and hopefully the book will help clarify that and get them excited."

Patel says that writing requires a lot of mental effort, but according to him, that effort is rewarding. "It's therapeutic for me to put my thoughts on paper, and the best part is just getting great feedback from people about how much your writing has helped them. I need to have vacation time in my campaign schedule," he explained.

"For example, in my latest book, Self-Made Success, I literally wrote 80 percent of it in the two-week spring break I had by cranking out 12 to 14 hours a day."

Over the next couple of years, Patel hopes to help one million students. "I measure impact not by the revenue or number of courses, but by reaching one million students and helping them in terms of the SAT, ACT, as well as the new self-help development book," he said. "I want to improve their lives, whether it will be related to college or scholarship or testing [or] just self-development in general."

Despite running his business full time, Patel is still on track to become a doctor. "Right now the day-to-day [business] runs pretty well. I started to do business development and marketing, and I am actually going to make a couple hires to help me with that. Things been going very well since Shark Tank," he said. "I think it's the most powerful marketing engine in the world."