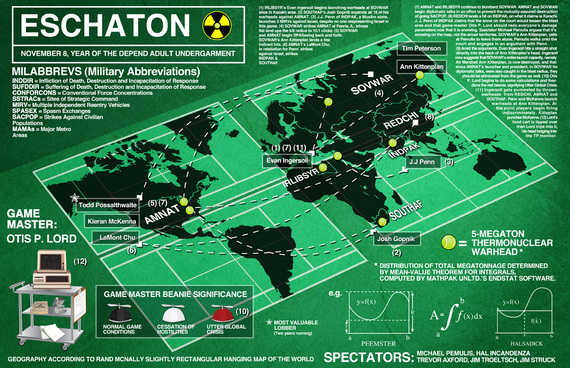 Above: A map based upon David Foster Wallace's metamodern novel Infinite Jest.

The term "metamodernism" first appeared in 1975, in a scholarly article by Mas'ud Zavarzadeh that focused its attention on 1970s domestic politics, a small subset of 1970s metafiction, and the burgeoning "technetronic culture" the author considered certain to emerge in the 1980s and 1990s. Zavarzadeh even foresaw (by name) the development of "Cybersex," which he described as "the transmission of sexual stimuli through computers." This 1975 citation of what would in time come to be known as an integral part of "the metaverse" -- a virtual space in which shared physical experiences can occur -- was followed by an iteration of the metaverse in the 1981 Vernor Vinge novella True Names, a 1986 online role-playing game by Lucasfilm Games called Habitat, and (most famously) Neal Stephenson's 1993 cyberpunk novel, Snow Crash. Three years after the latter cult classic, David Foster Wallace would publish another one -- Infinite Jest, a book Wallace had been working on since 1986 and now widely considered the first metamodern novel. Infinite Jest was metaversal inasmuch as it was predicated upon a seemingly impossible collision of writing styles, affects, and spheres of reality. Interestingly, Zavarzadeh's "The Apocalyptic Fact and the Eclipse of Fiction in Recent American Prose Narratives" even presaged the notion of "tapes that transmit...stimuli" -- a plot device central to Infinite Jest -- while also basing much of its scholarly critique on an analysis of American novelists who Wallace would later term influential for him.

While international discussion of metamodernism wouldn't heat up until many years later, and while (as with the terms modernism and postmodernism) different scholars have now offered remarkably divergent readings of the term, we can see in the early years of the Internet and the last few productive years of poststructuralist writing the beginning of metamodernism's ascension as a system of logic and structure of feeling -- or, as Zavarzadeh termed it in 1975, an "emerging cultural phase."

Whatever its manifestation in literature or online, we must concede that the "metaverse" is, at its core, merely a shared falsehood that invigorates rather than enervates, one that permits the simultaneous occupation of a space by persons differently situated who are, in real-time and their honest selves, perhaps incompatible. That romantic love is often described thus says much about the simultaneous optimism and cynicism -- the juxtaposition of romanticism and poststructuralism -- of the metaverse concept and its (still non-exhaustively) theorized consequences.

Wikipedia has actually captured the essence of the "metaverse" rather well: it holds that the metaverse is a vision of the future of the Internet, specifically the future of the Internet as a collective, virtual, shared space created by "the convergence of virtually enhanced physical reality and physically persistent virtual space, including the sum of all virtual worlds, augmented reality, and the Internet." In truth, though, the term "metaverse", recently linked to the term "metamodernism" by cult poet Richard Siken, is merely a metaphor: a metaverse exists anywhere discrete realities are artificially fused into a format that instrumentalizes each rather than acting as a debilitating influence. This is the case whether we are discussing virtual reality or, more ubiquitous of late, augmented reality, in which virtual reality is literally layered atop phenomenological (real-time) reality by virtual of digital projection.

In Siken's recent online discussion, memes -- the communally meaningful and individually meaningless detritus of the Internet Age -- are held to be both metamodern and metaversal, as are cross-over episodes of television shows in which beloved characters non-ironically and non-reflexively appear and act consequentially in the TV "worlds" of other beloved characters. With both the meme and the cross-over, multiple worlds/positions collide in a central space that is neither wholly connected to nor wholly discrete from each constituent world: every meme both refers back toward, and propulsively away from, the event or netspeak that encouraged it, just as a one-off "cross-over" episode is canonical for all of its constituent television "worlds" and characters while in no way representing a repeatable iteration of those worlds or characters. The cross-over space is, in other words, a non-dialectical "both/and" space that is at once two separate things and a third entirely new thing. While referenced by Siken only implicitly, the notion of "false nostalgia" -- a sincere feeling of nostalgia for a time, event, or person one never (respectively) lived in, experienced, or met -- is likewise metaversal as well as metamodern. That is, it is at once "authentic" (a real and deeply felt sensation that is emotionally if not objectively "true") and "artificial" (inasmuch as the earnestly nostalgic subject nevertheless "knows" what is being experienced cannot, in any literal sense, conform to the definition of "nostalgia").

We are heading, both in literature and on the Internet, toward a shared metaversal experience in which opposites like accuracy and falsehood, sincerity and irony, and optimism and cynicism collide and fuse. On the Internet, we can expect -- with the approaching development of virtual reality machines we'll all actually want to purchase and use -- to begin regularly inhabiting and experiencing in four dimensions shared virtual spaces that we know deconstructively are artificial constructs and yet nevertheless comprise environments in which we express our extroversion, optimism, and civic commitment. These will not be the degenerative, degraded reality/artifice singularities of Guy Debord, the postmodern theorist whose notion of "spectacle" pointed toward the meaninglessness of contemporary experience rather than its opportunities for transcendence; nor will they be merely the seedy, projection-choked backwaters envisioned, however thrillingly, in Stephenson's Snow Crash. In literature, metaversal spaces will be those that combine original, appropriated, and remixed or mashed-up material -- and authentic, appropriated, and remixed or mashed-up subjectivities -- to form earnest, self-expressive literary artifacts equally intended as reflexive personal catharsis (exhibitionism) and consequential political commitment (engagement).

It can be seen from the above that the metaverse, like metamodernism itself, favors collaboration over contestation, dialogue over dialectics, and juxtaposition over polarization. The consequences for literature are every bit as profound as the consequences for the Internet, as many of the literary dialectics that are now so entrenched in American life that we no longer consider them will be effectively superseded. For instance, we will see little more of the distinction between "literary" and "non-literary" content; between "literary artists" and non-authors; between creative authorship and so-called "uncreative" appropriation; between so-called "uncreative writing" and what I have termed "creative meta-writing"; between consistent and diffuse tonalities; between poetry and prose; between affective and qualitative judgments of literature; between immanent and transparent uses of language; between the languages of Art and Information; between interpretive and non-interpretive texts; between author and reader; between sincerity and irony, anger and anomie, knowingness and naiveté; and even, as the early twentieth-century avant-gardes of Europe once aimed for, between Art and Life. To be clear, the dissolution of these boundaries will not create an indiscriminate, nihilistic singularity of indeterminacy -- or even a detached, deconstructivist pastiche of decidedly distinct styles and spheres -- but a metamodern intertextuality and fusion of opposites that is in all respects generative of progressive thought and action. (Credit here goes to Zavarzadeh for introducing, in 1975, the notion of metamodernism as a fusion of -- rather than a plodding, dialectical "oscillation" between -- poles of thought and affect.)

Many will find, in this burgeoning literature, an opportunity to exercise their personal anxieties and professional ambitions by equating the metaverse to a capitalist Candyland in which the lack of standards and first principles always favors the house. In fact, whether one is a modernist-minded universalist or a postmodern-minded relativist, the fact that the house has been winning since the very beginning of the game must no longer go unnoticed -- or, in the latter case, noticed but only ineffectually challenged. Metamodernism and the metaverse combat the cynicism of an unwinnable dialectic by democratizing history and instrumentalizing difference as personally and locally generative rather than a zero-sum exchange. Where each individual author can be at once many authors, old conversations dependent upon entrenched and essentialized subject positions are rendered untenable and revealed as unproductive; indeed, if we all, in the Internet Age, already feel uprooted from our own selves and our received notions of community and the public square, metamodernism and the metaverse offers us a pragmatic model for navigating our new reality. This new model is a fusion of myriad, moving polar spectra -- conceptually, a network or matrix, or, geometrically, what poet Jesse Damiani has metaphorized as a "thrown star" -- rather than a two-dimensional battlefield. Better understanding the ground upon which we "stand" when online, or upon which we "tread" whenever we encounter a new text, offers us all a better opportunity to actuate our fraught subjectivities and fractured subcommunities rather than remain their unwilling accomplices.

Seth Abramson is an Assistant Professor of English at University of New Hampshire and the Series Co-Editor of Best American Experimental Writing. His most recent collection of metamodern poetry is Metamericana (BlazeVOX, 2015).