Mick Jagger has been a James Brown fan for actual decades. The Rolling Stones lead singer, who turned 71 on Sunday, has admitted he copied many of Brown's dance moves on stage. As the men rose to prominence as two of the biggest singers of the 1960s, they even became acquaintances. It was a relationship that lasted until Brown's death in 2006.

"I saw him at a show in Cleveland. I can't remember when, but we were both there together," Jagger told HuffPost Entertainment when asked about the last time he saw Brown alive. "I went to see his show, and he came to see me. We had a good time."

For Jagger, his connection to Brown has only increased in the eight years since the pioneering singer died. Peter Afterman, Brown's estate manager and Jagger's long-time friend, asked the Rolling Stones frontman if he wanted to make a documentary on Brown's life after securing music rights to Brown's catalog of hit songs. Jagger thought to take it one step further: a feature film about Brown that could work in concert with documentary. It was then that he connected with producer Brian Grazer, who had been working on a Brown movie himself for a decade with little triumph. Using a script written by Jez and John-Henry Butterworth, Jagger and Grazer put together "Get On Up," an unconventional biography about Brown that jumps through the singer's life, from his troubled upbringing in Georgia to his incredible career as a performer to his numerous issues with the law. (Brown was arrested multiple times on domestic violence charges and also spent time in prison for other offenses, including a three-year stint after leading police on a high-speed chase in 1988.)

Starring Chadwick Boseman as Brown and directed by Tate Taylor, "Get On Up" hopes to capitalize on audiences who helped make "Lee Daniels' The Butler" and Taylor's previous film, Best Picture-nominee "The Help," surprise box office hits in the month of August. For his part, Jagger has everything in his power to make the film a success: In addition to being a hands-on producer for "Get On Up" during production, Jagger has promoted the film on the "Today" show and in interviews with TIME magazine, Billboard, USA Today and The Huffington Post. We spoke to Jagger about his involvement in "Get On Up" at the world famous Apollo Theater in New York on a hazy, hot and humid Saturday afternoon in July. An edited transcript of our conversation is below. 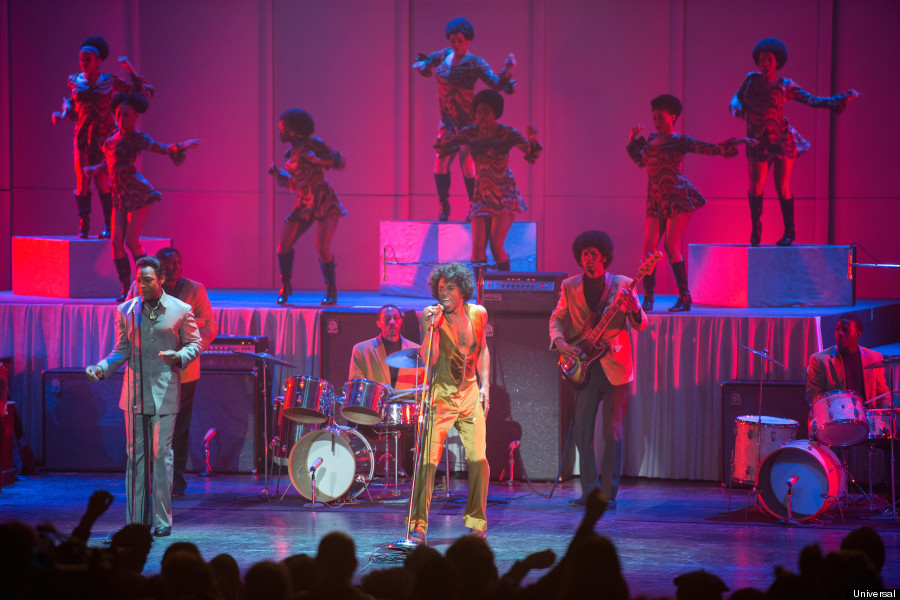 You were producing the Alex Gibney documentary, "Mr. Dynamite: James Brown and the Power of Soul," and, as the story goes in the press notes, woke up one day and thought a feature on Brown would be great too. Why?It's just a different animal, isn't it? Obviously I thought of "Ray." I thought "Ray" was a great movie. I loved that movie and people loved that movie. But I thought, in a way, that James Brown's life story and his onstage persona was more interesting. The onstage performances are more vivid and alive than in Ray's story. As much as we love Ray Charles, and he's one of my favorite singers, but I mean, when I thought about it, I thought, "Wow, if you could make a movie like that [with Ray Charles], we can certainly do a movie about someone like James Brown." But without copying "Ray" in any way, so why not make a feature of it too? And we can do the documentary, too. They can both be fantastic.

You've discussed how James Brown influenced you. Watching the movie, I couldn't help but think of how we can see parts of James Brown in singers like David Lee Roth and Axl Rose and also modern hip-hop artists like Kanye West and Jay Z. Do you think people even realize how influential Brown was across all genres of music?Well, probably not. Why would they? But he was definitely a role model on many levels. He's a role model as a guy who comes out on stage and really works his butt off. He always gave his best. He came out and did it. I never thought, "I want to be like that!" But obviously that rubs off on you. The other person I toured with was Little Richard. Every night he went out there -- didn't matter who the audience was, whether they were good, bad or indifferent -- and he just worked it. That rubs off on you. These are guys who were just always working it. So that's the way you want to be. On the other level, James Brown wanted to be in control of his own destiny. This movie is about someone who wants to be in control of their career and their life, especially when they came from a place where they weren't in control or they had very little to start with.

The movie depicts the infamous T.A.M.I. concert, and shows a screen version of The Rolling Stones watching Brown perform. How familiar were you with Brown before that show?Very familiar. I had everything. I had all his music. I had seen his music here at the Apollo. I talked to him. I hung out with him.

How much influence did you have on who was cast as a Mick Jagger for that scene?Not much, in the end. I was somewhere far away. I don't want to talk about it really. How can I talk about it without sounding ... there was a little bit of poetic license in that scene. In the end the scene works. It's a fun scene. It wasn't really what happened, but it works well.

As a producer was there one moment that you really fought to keep in the finished film?I can't really remember. My thing was, I wanted you, the audience, to be pulling for James. Sometimes when I read the script, I felt there was some feeling that you ... I was really saying, "I'm not pulling for this guy enough." It was quite simple really: It was just a question of juxtaposition of a few scenes. It wasn't really taking things out, it was where things were in the story. It's just where you put the accentuation. It doesn't matter how bad he is or how good he is, you want to see both sides of a character. But nevertheless, you do want to be pulling for him.

You obviously don't need to be a producer. Why do you do it?I quite enjoy doing it. It's a different discipline, but it has a lot of things that are the same [as leading the Rolling Stones]: managing large groups of people, making sure they get on with a common goal. But you've also got a lot of competing parties and you have problems to solve and so on. I also like the literary part of it, which I don't really get to do that much. I like the scripts. I like solving the puzzles. I kind of enjoy the dealmaking. I mean, as long as it doesn't go on forever. It's a lot of moving parts! As long as it doesn't take all my time, because I like to do creative things in other ways, it's a great thing. It's still a creative thing, it's not a business only thing. So it depends which route you take. Being a producer can mean many things. For this particular movie, it was quite interesting because it did have a good literary beginning. Other movies you're presented with a script and there is very little you can say. It's done. It could even be cast. You still get the same credit. With this, it was a much longer process.

You weren't just a rubber stamp of approval.I'm not really interested in doing that. I don't mind doing that, you know, if it's a project you really love.

With this film and the documentary, you've become the de facto caretaker of James Brown's legacy for a generation of young viewers. Do you think about who will do that for you and the Rolling Stones?Not really. I don't think about that much [laughs]. I always get asked about it!

With that in mind, did you feel any pressure to make sure James Brown's legacy was shown in a way that was true to him?Yeah, I want it to be true to him. I think he's a wonderful artist and I didn't want it to be over-glamorized or too de-glamorized and sleazy. In making the documentary, it was the same thing. By shading and nuancing, you can destroy someone's reputation. In the documentary, for instance, it would be very easy to accentuate the negative side -- which everyone has in their life -- and that would be a mean thing to do. What I tried to do in both these films is to show not only the creative and other side, but to show him as a complete person as much as possible. But still really leave people with an uplifting feeling, which I think is a correct thing to do for an artist of his status.

How did you decide on Tate Taylor as director?Brian and I, once we decided to partner up but before we had a deal, we decided to look for directors. We looked at lots of directors, and Tate was on the top of our list of people. We thought that even though Tate was relatively inexperienced, he did have experience with doing "The Help," which we liked. It was a bit of a leap of faith with Tate because he hadn't done a lot. But he convinced us that he could do this and he had boundless enthusiasm and energy and vitality to push the project through, especially for the limited amount of money that we had to make it. We decided that Tate could do it. I think we were vindicated at the end.

When did you realize it was the right decision?When you start seeing the first assembly cut, after the first couple of weeks. You know, "Okay, I think it's working. We're going to keep going!"

Tate's going to be forever connected with James Brown, and I wanted to ask you about your connection with Martin Scorsese. Do you have a favorite scene from his movies set to your music?I can't remember. He's used "Gimme Shelter" a lot. I'm doing this HBO series with Marty now. I think we're talking about using Stones music in that. Some of it. But, yeah he has a really great flare for using music. He was one of the first who used loud rock music, like, in your face. Before, it was sort of in the background, and he lets the music sometimes take over the scene in a really great way.

"Get On Up" Photos