On August 4, 1996, Paul Jensen did something he never thought he would do. He blew up a piece of his ranch land— the same land that his grandfather had homesteaded nearly 100 years earlier.

It was a clear, crisp morning when he pushed the button that set off a large underground explosion. A few hundred yards away a plume of concrete dust spread into the air with a poof and then fell back to earth. The handful of men standing with Jensen cheered and applauded.

Technically Jensen was not detonating anything on his land. More than thirty years earlier his father had signed that particular plot over to the U.S. government in perpetuity, for national defense.

From 1963 to 1994, a Minuteman intercontinental ballistic missile (ICBM) was implanted there, buried some three stories belowground in a silo, a concrete shell hardened to protect it from a potential nuclear attack. The small plot of land required for the missile— just two acres—was protected from the world with an eight-foot-tall chain-link fence.

Inside the fence the land was barely distinguishable from the surrounding plains—a few antennas, level ground, and a concrete silo lid were the only markers of Armageddon. If the Soviets wanted to pick a fight (something this missile was supposed to ensure they did not do), they would have something coming to them.

Actually they would have a lot coming to them. Between 1961 and 1967 the U.S. Air Force buried 1,000 Minuteman missiles across tens of thousands of square miles of the Great Plains. For three decades those missiles remained underground, cloistered on constant alert, capable of delivering their payload—a 1.2-megaton nuclear warhead—to target in less than 30 minutes.

This is how some Americans lived the Cold War. Never before had the military permanently implanted its weapons amidst the population and expected life to go on as usual. People living in the missile fields were to pretend that they did not notice the chainlink fences, the high-frequency antennas, or the lumbering Air Force trucks. With a few exceptions, they were not asked to move or relocate.

On the contrary, they were told that living a half mile from a missile silo was no big deal, that their cattle could graze on pastures nearby, that they could get close to the fence. One of the missile silos was a few hundred yards from a school.

During that time Jensen drove by that two-acre plot of land in the middle of his ranch, stopping at times to think about the missile buried there. Often he stopped just to wonder about the runoff that seemed to bleach the color out of the grass and soil—dead spots spilling out from under the edges of a government-issued chainlink fence.

For Jensen, blowing up the silo brought satisfaction—getting rid of the scar on the land, having a full ranch back, saying good-bye to the military, going back to the way things used to be.

Of course, the way things used to be was a long time off now. Much had changed since the day in 1961 when someone from the Pentagon came and told Paul’s father, Leonel, that his land had been selected to house a nuclear missile.

For one, the Cold War was over, which was why the missile could come out. The international struggle that had for decades cleaved the world into two spheres had crumbled along with the Union of Soviet Socialist Republics. In those years, South Dakota lost nearly 30 percent of its rural population, a sign of a collapsing farm economy. Paul Jensen was one of them: he had moved from the family ranch house, opting instead to live in Rapid City for the economic and social opportunities there. After nearly a century in the family, the ranch was now run by farmhands.

It may have seemed particularly peculiar, then, that blowing up a missile silo was so anticlimactic. A poof of smoke and the ground caved in. An outsider would not notice the difference. The wind did not stop its relentless howl to note the passing of an era. Indeed, if one were looking for continuity across the decades, something steady amidst all the change, perhaps it could be found in this land, the rolling prairie of western South Dakota—the short, tight grasses that fell and rose, interrupted only occasionally with river breaks, prairie dog towns, and exceedingly scarce and gnarled trees. The weather and the rain changed the contours of the plains, pushing and pulling and moving the heavy claylike soil. But such minute detail could not surmount the overwhelming feeling of sameness that confronted most outsiders when they entered this particular place.

It was, in fact, a sameness that was hardly broken by the presence of the Minutemen. Despite the vastness of the missile program, very few people outside of the missile fields knew much about it; certainly, few people knew where the silos were, and even the people who did know generally chose not to think about them. The Minutemen were hidden in plain sight— implanted in out-of-the-way places whose vast desolation seemed to swallow up the meaning of the weaponry. Perhaps, then, an unremarkable end to Jensen’s Minuteman silo was appropriate.

We are still meant to overlook the plains, to continue past those silences and let the remnants of concrete missile silos leach into the ground. But there is a story buried there, too, a story that belies the myth that nothing happened here during the Cold War. In a literal sense the Cold War was never fought—there was no thermonuclear war. There are no Cold War battlefields in the United States. We are told that Cold War tensions were released instead through so-called proxy wars— tragedies in Korea, Vietnam, Angola, Afghanistan, and elsewhere—allowing the Cold War to leave its mark on distant lands, providing most Americans with a comfortable detachment from the meaning of this conflict.

But scattered here and there across the Great Plains are scars: an imploded missile silo in Chugwater, Wyoming; the charred remnants of a chain-link fence near Newell, South Dakota; the extant and fully operational missile silo in Great Falls, Montana. Here are the leftovers of deterrence, the residue of the Cold War, uncomfortable reminders of what the government asked and in some cases still asks of the population and what was taken away. And within these leftovers is the story. It is a story of how Americans came to live with the Cold War, how they came to accept the tenets of nuclear deterrence and to live, in some cases, literally next door to nuclear weapons.

This is also a story that risks disappearing into its own “success.” After all, the Cold War is history. The missiles, we are told, served their purpose: there was no global war. As Jensen’s story suggests, many of the Minutemen have been deactivated, taken from the ground, and dismantled. We are told that nuclear deterrence is no longer our bulwark against global conflict. We have stepped back from the precipice. Our children no longer wake from nightmares about thermonuclear war. Our contemporary nuclear fear, a dirty bomb or rogue nuke, is of a different variety, less cataclysmic. The massive armaments of deterrence do not make sense in the age of global terror.

Not even the people of South Dakota who lived for so long with the Minutemen seem to want to tell the missiles’ stories. But these silences and spaces are as misleading as the quiet that fell over the missile fields during the Cold War.

In fact, of the 1,000 Minuteman missiles deployed in the 1960s, nearly half of them remain. Those are 450 ICBMs still capable of reaching targets around the world as quickly as you could have a pizza delivered to your door. This represents countless megatons of thermonuclear material— enough to turn the world into what journalist Jonathan Schell once warned would be a “republic of insects and grass.”

This means that thousands of Americans still live next door to Armageddon. We still require billions of dollars to staff and maintain those concrete holes in the ground.

Excerpted from THE MISSILE NEXT DOOR: THE MINUTEMAN IN THE AMERICAN HEARTLAND by Gretchen Heefner, published by Harvard University Press. Copyright © 2012 The President and Fellows of Harvard College. Used by permission. All rights reserved.

PHOTO GALLERY
The Missile Next Door
Download
Calling all HuffPost superfans!
Sign up for membership to become a founding member and help shape HuffPost's next chapter
Join HuffPost

Minuteman Missiles: Hidden In The Heartland
The Missile Next Door 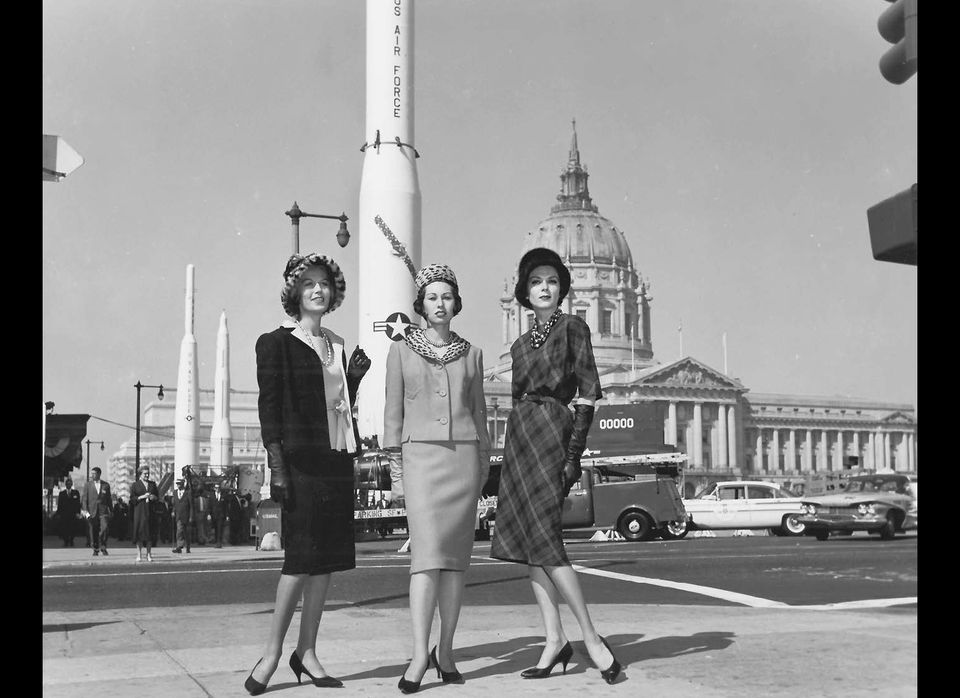 1 / 10
Fashionable weaponry
Fashion and military hardware meet as models pose before a Minuteman missile erected at the Air Force Association's annual convention in San Francisco, 1960. Images such as these led President Eisenhower to warn of the "insidious penetration of our own minds" with images of weaponry and war. <em>(Courtesy of Air Force Magazine)</em>