Have you ever wondered what would happen if some of the major tools in banking and finance were found out to be inaccurate? Fortunately that will never happen. Not because there aren't inaccurate tools but because most bankers don't want to know.

To most people banking and finance is a black box. You put your money in, and something happens, then you either take out extra or get charged more. What's inside this black box? What happened to cause the Wall Street Crash of 2008, and the subsequent Great Recession that wiped out $15 trillion in household wealth, 9 million jobs lost, 5 million homeowners who lost their homes, and brought 9 million Americans below the poverty line? We haven't seen any real accountability. Bankers laughed all the way to their banks using their shareholders' cash to pay $150 billion in fines.

We as tax payers, whose money was used to save the banks and allowed bankers to keep their jobs and continue to enjoy their lifestyles, are the new bank-stakeholders. We have priority over shareholders as we saved the shareholders, too. Let's correct the misconception. The Fed or the US Government is not the lender of last resort. It is us, the US tax payer.

Therefore, we the people, as lender of last resort, need to be better informed of what banks are doing.

To get there, we need to understand that there are three types of black boxes. (1) The famous computer acronym, GIGO or garbage in garbage out. (2) Data in garbage out (DIGO), and (3) Data in information out (DIIO).

The Wall Street Crash of 2008 and the $150 billion in fines point to a substantial amount of GIGO in banking. We, the tax payer, expect bankers be focused on DIIO. But how can we tell if bankers are talking from a position of insider information or mouthing off rhetoric to get our legislature to toe the line? For example one excuse is they cannot do business if some piece of legislature is enacted. And they get paid what? $20 million? I bet you there are thousands of professionals willing to step in and work in that "unworkable" environment for that kind of pay. Don't you agree?

My most favorite DIGO is the Esaki-Snyderman (see table below). The authors worked for Morgan Stanley and Fidelity. It is used by everyone, finance, insurance and banks. You find it in residential and commercial mortgage research reports, authoritatively discussing mortgage defaults. 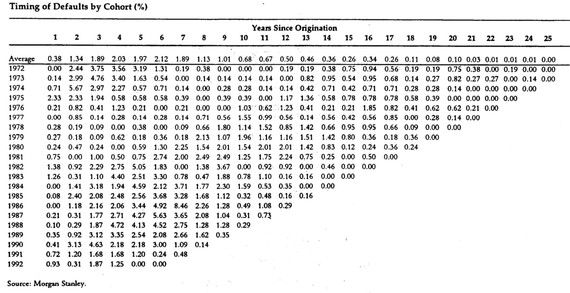 Allow me to explain.

Now here is the test of whether this is DIGO or not. Assume all loans have a constant default rate across their age. For example if it is 0.10% in year one, it is 0.10% in every year during the life of the mortgage. That is, the defaults rates are flat. So, if we input flat default rates, and this tool is not DIGO, we should get flat averaged default rates, right? Because a DIIO tool will not alter the data input characteristics in an unexpected manner, but a DIGO tool will, right?

I tested this using an MS Excel worksheet (see table below)

As you can see from the table and the graph below, the input of flat default rate mortgages (dash line) result in a non-flat average default (solid line) rates. That means this tool alters the mortgage statistic in undesirable ways. It is biased. It is DIGO. 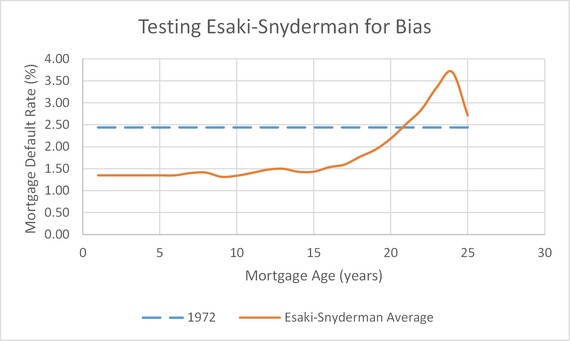 Esaki & Snyderman published their paper in 1999. In the 15 years since, nobody in banking or financial services caught this bias in this tool.

Here are several possible inferences:
(1) Bankers don't know what they are doing or don't understand the tools they work with. If they did they would have caught this long ago. So what if you read a report which says "Esaki-Snyderman"? Sorry, I'm legally not allowed to advise you. You need to make up your mind yourself or consult your financial advisor.

(2) Bankers are not the brightest people they claim to be. I once worked for a bank president, who every time he met me, would make it a point to say "smart people cannot do sales". What did he mean? That to get promoted you could not be smart? That bankers in general are not smart?

(3) Bankers are sheep. They don't ask questions, but follow blindly what they are told to do.

(4) Their skill set is below their pay grade. Need I say more?

PS My apologies to the many bankers I have worked with who are really smart, careful, methodical, organized and well intentioned, but . . . we as a society haven't done enough to ensure an accountable banking culture.