Major League Baseball announced suspensions for 13 players on Monday, including Alex Rodriguez. Twelve of the players suspended following MLB's investigation into Biogenesis, an anti-aging clinic in Miami under scrutiny for peddling performance-enhancing drugs, have agreed to begin serving their punishments immediately, according to Major League Baseball. The lone holdout is A-Rod. MLB hit the three-time American League MVP with regular-season ban of 211 games that will sideline him through the 2014 season.

"I am disappointed with the penalty and intend to appeal and fight this through the process," Rodriguez announced in a statement on Monday afternoon obtained by The Associated Press. "I am eager to get back on the field and be with my teammates in Chicago tonight. I want to thank my family, friends and fans who have stood by my side through all this."

Major League Baseball announced that A-Rod won't begin serving his suspension until the completion of his appeal. According to MLB.com, Rodriguez's suspension was "based on his use and possession of numerous forms of prohibited performance-enhancing substances, including Testosterone and human Growth Hormone, over the course of multiple years." While Rodriguez's alleged use of performance enhancers was punished under of MLB's Joint Drug Prevention and Treatment Program, his suspension also includes punishment under the Basic Agreement. According to MLB, Rodriguez acted to "obstruct and frustrate the Office of the Commissioner's investigation."

Each of the remaining suspensions meted out by MLB on Monday was capped at 50 games. All-Stars Nelson Cruz, Jhonny Peralta and Everth Cabrera highlighted the list of players suspended alongside A-Rod. All 50-game punishments were for violations of MLB's Joint Drug Prevention and Treatment Program. Here are the 13 players suspended on Monday, including Rodriguez, as well as the duration of their bans.

According to a statement released by MLB Public Relations, all players facing 50-game suspensions will begin serving them immediately without appeal with the exception of Norberto. His suspension will begin as soon as he signs with a new team.

"Major League Baseball has worked diligently with the Players Association for more than a decade to make our Joint Drug Program the best in all of professional sports," MLB Commissioner Bud Selig said in his statement on the suspensions. "I am proud of the comprehensive nature of our efforts - not only with regard to random testing, groundbreaking blood testing for human Growth Hormone and one of the most significant longitudinal profiling programs in the world, but also our investigative capabilities, which proved vital to the Biogenesis case. Upon learning that players were linked to the use of performance-enhancing drugs, we vigorously pursued evidence that linked those individuals to violations of our Program. We conducted a thorough, aggressive investigation guided by facts so that we could justly enforce our rules."

Despite being hit with such a hefty ban, Rodriguez may actually make his 2013 debut for the New York Yankees on Monday night in Chicago. The 38-year-old third baseman has yet to play for the Yankees in 2013 as he has recovered from hip surgery in January and a subsequent quad injury during his rehabilitation. Citing unnamed sources with knowledge of the situation, the Associated Press reported on Sunday that Rodriguez would be eligible to play while he appealed the punishment. The Yankees will face the Chicago White Sox at U.S. Cellular Field and first pitch is scheduled for 8:10 p.m. ET. Rodriguez had until Thursday at 3 p.m. to inform MLB of his intent to appeal the suspension, according to Joel Sherman of the New York Post.

"We agree with his decision to fight his suspension," MLB players union chief Michael Weiner said of Rodriguez's appeal, via Ken Rosenthal of FOX Sports. "We believe Commissioner has not acted appropriately under CBA.”

The announcement of these suspensions caps months of speculation about the possible punishment for players connected to Biogenesis. Rodriguez, Biogenesis and clinic founder Anthony Bosch have been at the center of the latest scandal involving performance-enhancing drugs to rock baseball. In January 2013, the Miami New Times published Biogenesis documents purportedly chronicling the use of performance-enhancing drugs -- including human growth hormone and anabolic steroids -- by several prominent MLB players. Rodriguez's name appeared 16 times in those documents.

In June, T.J. Quinn, Pedro Gomez and Mike Fish of ESPN's "Outside The Lines" reported Rodriguez and Milwaukee Brewers slugger Ryan Braun headlined a group of approximately 20 players that MLB was seeking to suspend for connections to Bosch and Biogenesis. Citing an unnamed source described as familiar with the case, ESPN reported MLB Commissioner Bud Selig could seek 100-game suspensions for players involved.

Braun became the first player suspended following MLB's investigation into Biogenesis when he was sidelined for the remainder of the 2013 season on July 22. The 2011 National League MVP accepted his suspension without appeal and will miss the final 65 games of the Brewers' regular season.

MLB Suspensions: A-Rod Among 13 Players Suspended But Only One To Appeal PED Punishment [UPDATED]
Media Reactions to Biogenesis Suspensions 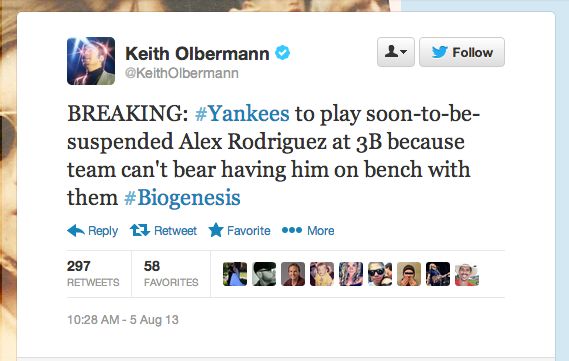