Here's the thing about us Tolkien fanatics: we just can't get enough books about that place called Middle-earth. If you have a friend, relative or loved one who has a passion for The Hobbit or The Lord of the Rings, you can't go wrong by giving them one of these Tolkien tomes as a Christmas present this year. Some of the books listed below are new publications and others are reprints of classics. But they're all certain to make the Tolkien devotee in your life beam like a happy hobbit.

The Father Christmas Letters (J.R.R. Tolkien) J.R.R. Tolkien loved Christmas, and his kids were the beneficiaries of his magical yuletide spirit. Every year for two decades the Tolkien children received a letter from Santa Claus (or Father Christmas as he is called in the United Kingdom) with stories and drawings about his adventures at the North Pole, and his clumsy but lovable helper Polar Bear. Tolkien, a brilliant amateur artist, even went so far as to create the North Pole Postage stamps that adorn the envelopes. The book is a charming glimpse inside the warm and witty soul of the man who made Middle-earth.

The Maps of Tolkien's Middle-earth (Brian Sibley and John Howe) Everything about this book is gorgeous, from the four large format color maps of Tolkien's realms (featuring the artwork of acclaimed Tolkien artist John Howe), to the beautiful slipcase design that creates a 3D hobbit-hole effect when the two hardcover volumes are inserted into it. The text by prominent Tolkien expert Brian Sibley explains the history of the original maps that were created by Tolkien and his son Christopher. There's also a handy geographical index for each map including the most obscure places referenced in The Silmarillion. A magnificent point of reference for Tolkien's world.

The Hobbit (Illustrated by Jemima Catlin) With 150 original pictures, this new edition of The Hobbit illustrated by newcomer Jemima Catlin contains a dragon's hoard of artistic gold. The artist was inspired by Tolkien's own illustrations, and kids will love her humorous, dynamic and colorful pictures. The green clothbound hardback is a handsome book, and the deluxe red slipcover version (with its gilded Smaug snaking across the front and back covers) would grace any Tolkien book collector's shelf. It's the perfect edition to snuggle up with and read aloud to a child. Kids can follow along--guided by the numerous pictures--on Bilbo's strange and magical journey to the Lonely Mountain and back to the Shire.

The Letters of J.R.R. Tolkien (J.R.R. Tolkien) There's no better way of learning about Tolkien the man than reading the hundreds of fascinating letters in this remarkable collection selected and edited by Tolkien biographer Humphrey Carpenter. Tolkien was a prolific letter writer, and his creative genius, whimsy, passions and even his shortcomings are all on display in these intimate missives. The most revealing are his letters to his children, especially the ones written to his son Christopher who later edited his late father's unpublished writings to produce, among other books, The Silmarillion and Unfinished Tales. A must-have for any Tolkien enthusiast.

The Tolkien Reader (J.R.R. Tolkien, Peter S. Beagle) This anthology of Tolkien's shorter works and essays includes the author's essential "On Fairy-Stories" in which he defends the importance of fantasy writing as a literary form. The Tolkien Reader is also the only book where you can find acclaimed fantasy author Peter S. Beagle's thoughtful little masterpiece of Middle-earth rumination "Tolkien's Magic Ring." Penned almost 50 years ago, this beautifully written essay meditates on why The Lord of the Rings was already such an important and beloved work. And Beagle's think piece was a harbinger of the true worldwide Tolkien phenomenon yet to come.

Exploring J.R.R. Tolkien's The Hobbit (Corey Olsen) Corey Olsen, aka "The Tolkien Professor" is one of the most knowledgeable people in the world on the subjects of Tolkien and Middle-earth. His book is a meticulously researched and lively exploration of every detail of The Hobbit. And his examination of the chapter "Riddles in the Dark" should be required reading for every Tolkien fan.

The Complete Tolkien Companion (J.E.A. Tyler) Tyler's book The Tolkien Companion was the first work that attempted to categorize Tolkien's massive legendarium. After The Silmarillion and other posthumous Tolkien works were published, Tyler revised his encyclopedia to include this new information, and thus was born The Complete Tolkien Companion. This latest printing (with maps, genealogical tables and helpful charts illustrating Tolkien's mythopoeia) bears a superb cover painting of Gimli and Legolas in the Glittering Caves by renowned Tolkien artist Ted Nasmith. It's a splendidly chunky volume of Tolkien goodness.

The Hobbit (Pocket-sized and deluxe pocket-sized editions) This Halfling-sized version of The Hobbit is small enough to take backpacking, or you can even stick it in your glove box for emergency reading on the road. It's a miniature version of the original 1937 edition of the classic with cover art and illustrations by Tolkien himself. The deluxe version has a faux leather cover which is perfect for slipping into the pocket of an old coat. And the book is small enough to actually stuff into a stocking.

The Atlas of Middle-earth (Karen Wynn Fonstad) First published in 1981, The Atlas of Middle-earth is an invaluable resource for hardcore Tolkien fans. Fonstad had a masters in geography, and she approached Middle-earth as if it had been a real place with maps showing population, vegetation, and climate. Not only can you follow the journeys of the Fellowship across the landscape of Middle-earth, but you can also study accurately drawn plans of buildings and cities (like Orthanc and Minas Tirith) and even see a cutaway of the Mines of Moria, or the floor plan of Bag End. A bona fide Tolkien classic.

Tolkien: A Dictionary (David Day) Author and Renaissance man David Day has been writing books about Tolkien for 35 years. His A Tolkien Bestiary is considered to be a classic by Middle-earth fans. Tolkien: A Dictionary is a neat little book whose title says exactly what it is: Middle-earth from Aglarond to Zirakzigil. The soft leather-like flexible cover makes it the perfect companion to The Hobbit deluxe pocket edition. The numerous black and white illustrations are superb, and the book's end-papers feature a cool composite study of Arda (all of the lands of Tolkien's world) throughout the ages.

Tales from the Perilous Realm (Illustrated by Alan Lee) Gathered together in one sumptuously illustrated volume are four Tolkien novellas including the classic Farmer Giles of Ham, and The Adventures of Tom Bombadil--the collection of poems set in Middle-earth. The book is illustrated by the masterful Alan Lee: one of the foremost Tolkien book illustrators and Academy Award winner for best Art Direction for The Return of the King. Lee's drawings have the magical touch of a wizard--he effortlessly breathes life into Tolkien's world and its inhabitants.

The Fall of Arthur (J.R.R. Tolkien) Tolkien began his poem about the Arthurian legend in the 1930s and gave it up about the time of the publication of The Hobbit. The poem, written in the style of the Old English epic Beowulf, was never completed. This version was edited by Tolkien's son Christopher and has a fascinating section on the poem's relation to The Silmarillion--Tolkien's mythology of Middle-earth. The Fall of Arthur, with its insights into Tolkien's storytelling influences, is an excellent addition to any Tolkien library.

Fantasy Freaks and Gaming Geeks (Ethan Gilsdorf) Journalist Ethan Gilsdorf travels around the world on a poignant and hilarious quest to rediscover his youthful love of fantasy role playing games and Tolkien. He explores Oxford, England (where Tolkien taught and wrote most of his books), Marquette University in Wisconsin (where he gets to hold manuscript pages from The Lord of the Rings) and New Zealand (visiting the locations where the film trilogy was shot). It's a moving and funny look at the saving grace and inspirational power of fantasy. 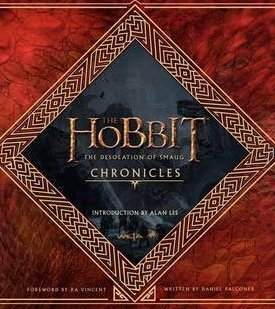 The Hobbit: The Desolation of Smaug Chronicles: Art and Design (Weta) The people at Weta (Peter Jackson's digital visual effects company) know how to make luxurious books, and this follow up to The Hobbit: An Unexpected Journey: Chronicles: Art and Design is another gift to fans of The Hobbit films. This 224 page embossed hardcover features over 1,000 images including conceptual art (from the aforementioned John Howe and Alan Lee), photos of the film production, and commentary from the cast and crew. It's a book that will make any fan of Peter Jackson's Hobbit films giddy with delight. Please give it to us, the precious! Yesss!

Noble Smith is the author of The Wisdom of the Shire, hailed by Wired.com as "A definitive guide to Tolkien's worldview," and published by Thomas Dunne Books/St. Martin's Press (available now in paperback).