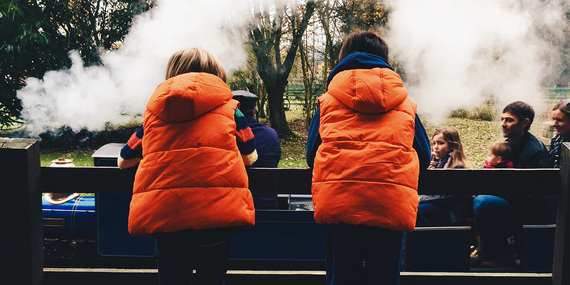 I knew that Josh* was gay for four months before he told my parents.

Growing up, were were never that close. We were very different people that didn't have much in common. Despite our differences, we still cared a lot about each other, even if we didn't always have much to talk about.

When my brother began shutting my parents out from his life in high school, the door closed on me, too. When Josh went to college, communicating with him became even more difficult. We rarely spoke, which is why when he video chatted me one day in December, I could not have been more surprised.

Our conversation started out casually, but I could tell he was apprehensive about something. Finally he said, "I have to tell you something. I'm gay."

After what felt like a year of silence I said, "That's great!" with the most sincere tone I could muster. I am not at all homophobic, but it never crossed my mind that Josh could be gay. I was in shock.

I needed time to process what I had just learned. He hooked up with girls in high school. He never really had a girlfriend, but I always just assumed that was because he was my awkward older brother.

After thinking about it for a long time, I actually felt happy. I had spent so much time wondering why Josh felt distant, wondering why it seemed he was struggling with something.

Finally, I know why. For the first time, I feel like I understood my brother.

Josh had asked that I not tell my parents. He wanted to do it himself. I kept my his secret for five months, fearing my parents would find out before he had the chance to tell them, and that they would feel betrayed.

I asked Josh a few times if he was planning on telling them anytime soon. He told me he had tried multiple times, but could never find the words or the courage.

In March of that year, my family took a vacation to Florida. On the last night of vacation, I thought to myself how pleasant it was that we had finally made it through a week together without bickering.

It was then that I heard my Mom crying from the other room. My mom's crying was followed by my Dad's yelling. Over and over, my Dad screamed, "I don't believe it." My brother had told my parents he was gay.

I remember hearing my parents ask question after question. "How do you know? Could this just be a phase? You don't seem gay... Maybe you'll grow out of it."

My brother struggled to answer each question and to maintain his composure. My parents are very liberal and have always been extremely supportive of gay rights, but found it difficult to be supportive of Josh right away. I wish I could have done more to help. I left Josh to fight that battle all on his own.

My parents are still adjusting to Josh being gay, but with time and space, they have come to terms with it. I think the hardest part for my Mom was that Josh felt as if he couldn't tell her. Josh and my Mom were extremely close, and she was hurt that Josh never felt comfortable enough to confide in her.

My father was, and remains, confused. He tried to be straight for a long time, because that is what society and my family wanted him to do. I think Josh may have deep down always known that he was gay, but he was confused for a long time, just as my father is now.

Today, I am often reminded of the struggles my brother must face on a day-to-day basis. I flinch when people say "that's gay" or "faggot", because I know sometimes, my brother has to hear someone say that, too.

I worry for my kindhearted, brilliant, shy brother in a world filled with so much discrimination. I also worry for my father. I know he feels he failed my brother, and I know that eats away at him. But Josh is the happiest he has ever been, and I know eventually, my Dad will see that, too.

Why Rooming With Your Best Friend Really Isn't That Bad

Things to Remember When You Don't Get the Internship