PHNOM PENH, July 12 (Reuters) - U.S. praise for Myanmar grows by the day, but Secretary of State Hillary Clinton still cannot bring herself to use the name of the country in the presence of officials from the former Burma.

Addressing a regional forum in the Cambodian capital, Clinton studiously avoided using either Myanmar or Burma during a speech in which she lauded the reforms there that "few dared ... would come".

It appears Clinton did not wish to offend Myanmar's government and its diplomats in Phnom Penh by referring to the country by the name officially used in Washington, Burma - two short syllables that rile the former generals who now lead its nascent democracy.

The dilemma dates back to 1989, a year after thousands were killed in the suppression of a popular uprising, when the army changed the name to Myanmar, a name the United States never accepted because it would have conferred legitimacy on the former generals.

Many of those generals swapped their military fatigues for civilian clothes in a rigged 2010 election that cleared the way for a surprisingly reformist parliament that took office last year, ending 49 years of unbroken military rule.

The two words mean largely the same thing. Burmah, as it was spelled in the 19th century, is a local corruption of the word Myanmar.

Clinton is scheduled to meet Myanmar's President Thein Sein at a meeting of business leaders in Siem Reap on Friday, two days after the United States eased sanctions against the country to allow U.S. companies to invest there.

As the rapprochement between the two grows stronger, the real test may not be how far sanctions are rolled back but whether Washington swaps two syllables for three. (Reporting by Arshad Mohammed and Jason Szep; Writing by Jeremy Laurence)

PHOTO GALLERY
Clinton Lauds Change In A Country With No Name 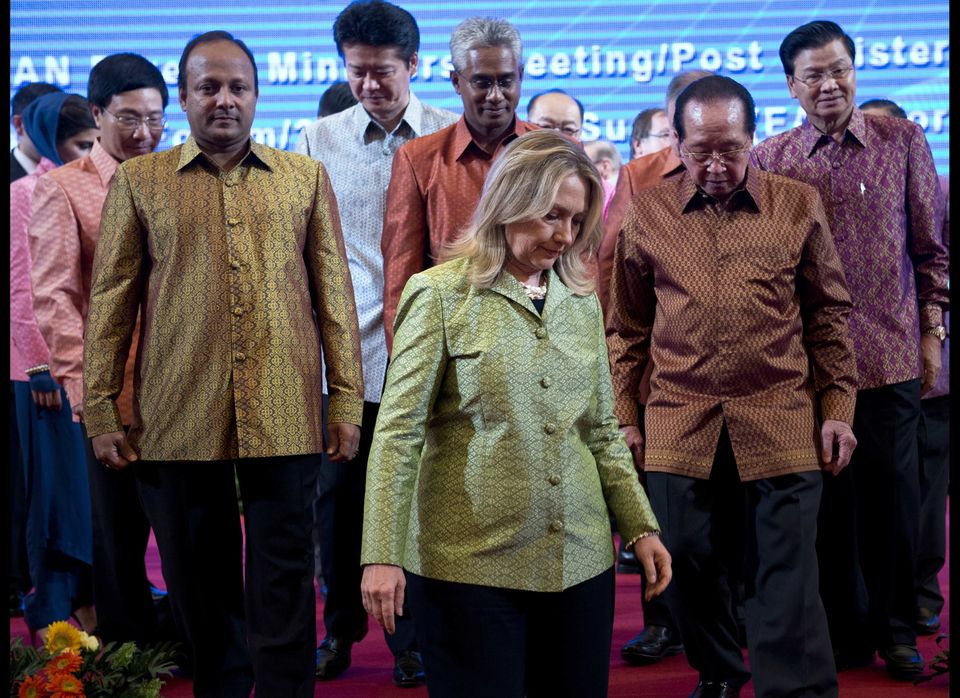 1 / 10
US Secretary of State Hillary Clinton, center, and other ministers during the ASEAN Gala Dinner at City Hall in Phnom Penh on July 12, 2012. (AP Photo/Brendan Smialowski, Pool)
AP