On the weekend of November 16th, the G20 leaders whisked into Brisbane, posed for their photo ops, approved some proposals, made a show of roundly disapproving of Russian President Vladimir Putin, and whisked out again. It was all so fast, they may not have known what they were endorsing when they rubber-stamped the Financial Stability Board's "Adequacy of Loss-Absorbing Capacity of Global Systemically Important Banks in Resolution," which completely changes the rules of banking.

Russell Napier, writing in ZeroHedge, called it "the day money died." In any case, it may have been the day deposits died as money. Unlike coins and paper bills, which cannot be written down or given a "haircut," says Napier, deposits are now "just part of commercial banks' capital structure." That means they can be "bailed in" or confiscated to save the megabanks from derivative bets gone wrong.

Rather than reining in the massive and risky derivatives casino, the new rules prioritize the payment of banks' derivatives obligations to each other, ahead of everyone else. That includes not only depositors, public and private, but the pension funds that are the target market for the latest bail-in play, called "bail-inable" bonds.

"Bail in" has been sold as avoiding future government bailouts and eliminating too big to fail (TBTF). But it actually institutionalizes TBTF, since the big banks are kept in business by expropriating the funds of their creditors.

It is a neat solution for bankers and politicians, who don't want to have to deal with another messy banking crisis and are happy to see it disposed of by statute. But a bail-in could have worse consequences than a bailout for the public. If your taxes go up, you will probably still be able to pay the bills. If your bank account or pension gets wiped out, you could wind up in the street or sharing food with your pets.

In theory, US deposits under $250,000 are protected by federal deposit insurance; but deposit insurance funds in both the US and Europe are woefully underfunded, particularly when derivative claims are factored in. The problem is graphically illustrated in this chart from a March 2013 ZeroHedge post: 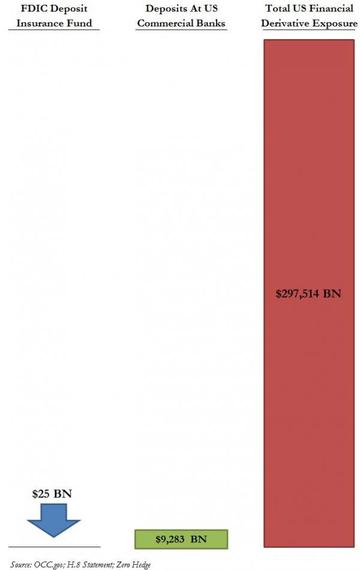 More on that after a look at the new bail-in provisions and the powershift they represent.

The Financial Stability Board (FSB) that now regulates banking globally began as a group of G7 finance ministers and central bank governors organized in a merely advisory capacity after the Asian crisis of the late 1990s. Although not official, its mandates effectively acquired the force of law after the 2008 crisis, when the G20 leaders were brought together to endorse its rules. This ritual now happens annually, with the G20 leaders rubberstamping rules aimed at maintaining the stability of the private banking system, usually at public expense.

According to an International Monetary Fund paper titled "From Bail-out to Bail-in: Mandatory Debt Restructuring of Systemic Financial Institutions":

[B]ail-in . . . is a statutory power of a resolution authority (as opposed to contractual arrangements, such as contingent capital requirements) to restructure the liabilities of a distressed financial institution by writing down its unsecured debt and/or converting it to equity. The statutory bail-in power is intended to achieve a prompt recapitalization and restructuring of the distressed institution.

The language is a bit obscure, but here are some points to note:

• What was formerly called a "bankruptcy" is now a "resolution proceeding." The bank's insolvency is "resolved" by the neat trick of turning its liabilities into capital. Insolvent TBTF banks are to be "promptly recapitalized" with their "unsecured debt" so that they can go on with business as usual.

• "Unsecured debt" includes deposits, the largest class of unsecured debt of any bank. The insolvent bank is to be made solvent by turning our money into their equity - bank stock that could become worthless on the market or be tied up for years in resolution proceedings.

• The power is statutory. Cyprus-style confiscations are to become the law.

• Rather than having their assets sold off and closing their doors, as happens to lesser bankrupt businesses in a capitalist economy, "zombie" banks are to be kept alive and open for business at all costs - and the costs are again to be to borne by us.

The Latest Twist: Putting Pensions at Risk with "Bail-Inable" Bonds

First they came for our tax dollars. When governments declared "no more bailouts," they came for our deposits. When there was a public outcry against that, the FSB came up with a "buffer" of securities to be sacrificed before deposits in a bankruptcy. In the latest rendition of its bail-in scheme, TBTF banks are required to keep a buffer equal to 16-20% of their risk-weighted assets in the form of equity or bonds convertible to equity in the event of insolvency.

Called "contingent capital bonds", "bail-inable bonds" or "bail-in bonds," these securities say in the fine print that the bondholders agree contractually (rather than being forced statutorily) that if certain conditions occur (notably the bank's insolvency), the lender's money will be turned into bank capital.

However, even 20% of risk-weighted assets may not be enough to prop up a megabank in a major derivatives collapse. And we the people are still the target market for these bonds, this time through our pension funds.

In a policy brief from the Peterson Institute for International Economics titled "Why Bail-In Securities Are Fool's Gold", Avinash Persaud warns, "A key danger is that taxpayers would be saved by pushing pensioners under the bus."

It wouldn't be the first time. As Matt Taibbi noted in a September 2013 article titled "Looting the Pension Funds," "public pension funds were some of the most frequently targeted suckers upon whom Wall Street dumped its fraud-riddled mortgage-backed securities in the pre-crash years."

Wall Street-based pension fund managers, although losing enormous sums in the last crisis, will not necessarily act more prudently going into the next one. All the pension funds are struggling with commitments made when returns were good, and getting those high returns now generally means taking on risk.

Other than the pension funds and insurance companies that are long-term bondholders, it is not clear what market there will be for bail-in bonds. Currently, most holders of contingent capital bonds are investors focused on short-term gains, who are liable to bolt at the first sign of a crisis. Investors who held similar bonds in 2008 took heavy losses. In a Reuters sampling of potential investors, many said they would not take that risk again. And banks and "shadow" banks are specifically excluded as buyers of bail-in bonds, due to the "fear of contagion": if they hold each other's bonds, they could all go down together.

Whether the pension funds go down is apparently not of concern.

Propping Up the Derivatives Casino: Don't Count on the FDIC

Kept inviolate and untouched in all this are the banks' liabilities on their derivative bets, which represent by far the largest exposure of TBTF banks. According to the New York Times:

American banks have nearly $280 trillion of derivatives on their books, and they earn some of their biggest profits from trading in them.

These biggest of profits could turn into their biggest losses when the derivatives bubble collapses.

Both the Bankruptcy Reform Act of 2005 and the Dodd Frank Act provide special protections for derivative counterparties, giving them the legal right to demand collateral to cover losses in the event of insolvency. They get first dibs, even before the secured deposits of state and local governments; and that first bite could consume the whole apple, as illustrated in the above chart.

The chart also illustrates the inadequacy of the FDIC insurance fund to protect depositors. In a May 2013 article in USA Today titled "Can FDIC Handle the Failure of a Megabank?", Darrell Delamaide wrote:

[T]he biggest failure the FDIC has handled was Washington Mutual in 2008. And while that was plenty big with $307 billion in assets, it was a small fry compared with the $2.5 trillion in assets today at JPMorgan Chase, the $2.2 trillion at Bank of America or the $1.9 trillion at Citigroup.

. . . There was no possibility that the FDIC could take on the rescue of a Citigroup or Bank of America when the full-fledged financial crisis broke in the fall of that year and threatened the solvency of even the biggest banks.

That was, in fact, the reason the US Treasury and the Federal Reserve had to step in to bail out the banks: the FDIC wasn't up to the task. The 2010 Dodd-Frank Act was supposed to ensure that this never happened again. But as Delamaide writes, there are "numerous skeptics that the FDIC or any regulator can actually manage this, especially in the heat of a crisis when many banks are threatened at once."

All this fancy footwork is to prevent a run on the TBTF banks, in order to keep their derivatives casino going with our money. Warren Buffett called derivatives "weapons of financial mass destruction," and many commentators warn that they are a time bomb waiting to explode. When that happens, our deposits, our pensions, and our public investment funds will all be subject to confiscation in a "bail in." Perhaps it is time to pull our money out of Wall Street and set up our own banks - banks that will serve the people because they are owned by the people.