From MUCH ADO ABOUT LOVING by Jack Murnighan and Maura Kelly. Copyright © 2012 by Maura Kelly and Jack Murnighan. Reprinted by permission of Free Press, a division of Simon & Schuster, Inc.

Arm in arm, legs entwined, sweat beading on the marmoreal perfection of the human form, the dance of love just brought to its exquisite denouement, the Marlboro smoked, the snifter sipped dry, and now...

It’s a dangerous time to speak. Post-amour, everyone is vulnerable, the defenses have been laid bare, and any utterance can be taken to have more meaning than intended. How many times have I said some- thing I thought innocent—or even complimentary—only to have it heard by my beloved as something along the lines of “I wish you would turn into a pizza.”

To see how this plays out in literature, we need only turn to one of the saucier of all highbrow novels, Lady Chatterley’s Lover. There’s enough sex in Lawrence’s scandalous masterwork that I could find ten—yes, ten—things said after sex that you really wouldn’t want to say today. Some are said by men, some are said by women, but both sexes should avoid pretty much all of them.

So without further ado, and in the order in which they appear in the book, here they go:

PHOTO GALLERY
Ten Things Not To Say After Sex According To Lady Chatterley's Lover
Download
Calling all HuffPost superfans!
Sign up for membership to become a founding member and help shape HuffPost's next chapter
Join HuffPost 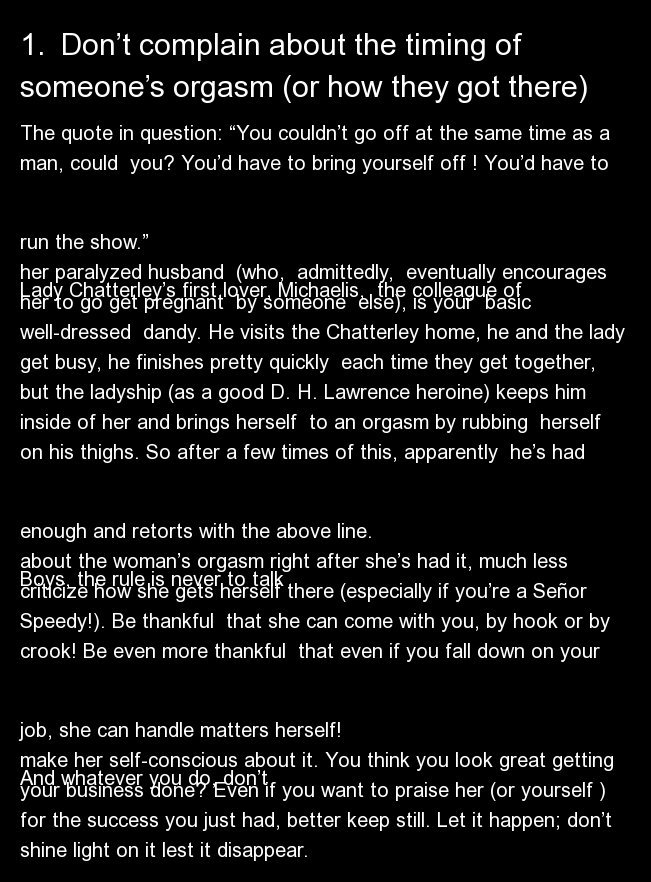 1 / 10
1. Don’t complain about the timing of someone’s orgasm (or how they got there)
<em>The quote in question: “You couldn’t go off at the same time as a man, could you? You’d have to bring yourself off ! You’d have to run the show.”</em> Lady Chatterley’s first lover, Michaelis, the colleague of her paralyzed husband (who, admittedly, eventually encourages her to go get pregnant by someone else), is your basic well-dressed dandy. He visits the Chatterley home, he and the lady get busy, he finishes pretty quickly each time they get together, but the ladyship (as a good D. H. Lawrence heroine) keeps him inside of her and brings herself to an orgasm by rubbing herself on his thighs. So after a few times of this, apparently he’s had enough and retorts with the above line. Boys, the rule is never to talk about the woman’s orgasm right after she’s had it, much less criticize how she gets herself there (especially if you’re a Señor Speedy!). Be thankful that she can come with you, by hook or by crook! Be even more thankful that even if you fall down on your job, she can handle matters herself! And whatever you do, don’t make her self-conscious about it. You think you look great getting your business done? Even if you want to praise her (or yourself ) for the success you just had, better keep still. Let it happen; don’t shine light on it lest it disappear.