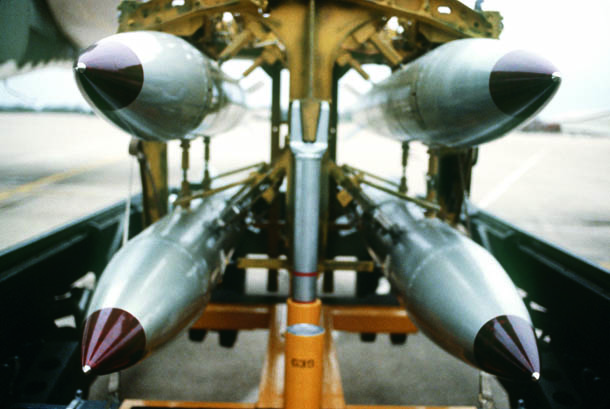 At the same time President Obama has been pressing for further reductions in U.S. and Russian nuclear arsenals, the National Nuclear Security Administration (NNSA)--a semi-autonomous agency within the Department of Energy--is planning to spend $60 billion over the next 25 years to replace existing nuclear weapons with a suite of new warheads.

According to a report released today by the Union of Concerned Scientists (UCS), the NNSA plan--which calls for building new nuclear material production facilities and consolidating the current stockpile of seven types of warheads into five--is misguided.

"The United States needs to extend the life of its nuclear arsenal, but it should refurbish its existing weapons instead of spending tens of billions to build new ones," said report co-author Lisbeth Gronlund, co-director of UCS's Global Security Program. "The NNSA also has to pay more attention to warhead monitoring, dismantling warheads, and developing ways to verify further arms reduction agreements."

The centerpiece of the NNSA's plan, which it rolled out in June, is its so-called "3+2" consolidation strategy. The arsenal of tomorrow would consist of three warheads deployed on Air Force and Navy long-range missiles and two types of air-delivered weapons deployed on cruise missiles and bombers.

Creating new warheads, even if their individual components are based on existing designs, is problematic for a number of reasons, according to the report.

"NNSA's plan violates the spirit if not the letter of the administration's pledge to not develop new nuclear weapons," said report co-author Philip Coyle, a senior science fellow at the Center for Arms Control and Non-Proliferation and former head of Pentagon weapons testing. "It sends the wrong message to the rest of the world."

Beyond economic and political considerations, the NNSA plan also has a major technical drawback: It could be difficult for the NNSA to certify that its new warheads are safe, secure and reliable without nuclear explosive testing. The United States, which conducted its last explosive test in 1992, has signed but not ratified the Comprehensive Test Ban Treaty prohibiting them.

"Making aggressive modifications to U.S. weapons would create a number of technical challenges for the agency," said report co-author Steve Fetter, a professor at the University of Maryland's School of Public Policy who served as assistant director at large in the White House Office of Science and Technology Policy from 2009 to 2012. "The NNSA can vouch for the safety and reliability of currently deployed or refurbished warheads, but the same level of confidence may not be possible if the agency makes substantial modifications."

UCS's report, titled "Making Smart Security Choices," also found that some of the NNSA's other planned expenditures are unnecessary. For example, the NNSA wants to build a new Chemistry and Metallurgy Research Replacement-Nuclear Facility at the Los Alamos National Laboratory in New Mexico, although it has deferred construction for another four years. The proposed facility, whose projected cost has jumped from $375 million to $5.9 billion, would enable the agency to produce more plutonium pits, the warhead core. Existing plutonium pits, however, will last at least 85 to 100 years, so the only reason to manufacture new pits would be for new, modified warheads. And even if the United States commits to producing new warheads, existing facilities would be able to provide enough plutonium pits, assuming further modest reductions in the U.S. nuclear stockpile over the next quarter century. UCS recommends that the administration cancel the facility.

Likewise, the NNSA is planning to build the Uranium Processing Facility at the Y-12 National Security Complex in Oak Ridge, Tennessee, to produce new bomb secondaries, a component that helps produce a more powerful explosion. The projected cost of the facility has rocketed from $600 million in 2005 to more than $7 billion today, and the year it is expected to be fully operational has been pushed back from 2018 to 2038. The report recommends that the NNSA delay constructing the facility until it evaluates the possibility of reusing existing secondaries.

Meanwhile, the agency has already started building a new facility at its Savannah River Site near Aiken, South Carolina, to use plutonium from dismantled weapons to produce mixed oxide (MOX) fuel for commercial nuclear reactors. The initial 2003 estimate pegged construction of the MOX Fuel Fabrication Facility at $1.6 billion and assumed it would be completed by 2007. By September 2012, the total cost of the MOX program had soared to $6.8 billion, and start-up had slipped to 2016.

The UCS report found that the MOX approach to disposing of excess plutonium has inherent security risks and recommends a different strategy: solidifying the plutonium in glass or ceramic material and disposing of it in a permanent repository. "The current plan to use excess plutonium from weapons in commercial reactor fuel would enable terrorists easier access to this material," said Fetter. "The NNSA should cancel the MOX program and prepare the plutonium for disposal in an underground geologic repository."

Getting the NNSA's Priorities Straight

While the NNSA is pushing to build new facilities that UCS says are unwarranted, the agency is skimping on its program that monitors how well U.S. weapons are aging, slow-walking dismantling retired warheads, and not devoting enough resources to develop new ways to verify arms reductions agreements.

Both the Energy Department's inspector general and the Government Accountability Office have issued reports in recent years criticizing the NNSA's Stockpile Surveillance Program, which is tasked with assessing the weapon aging process. Historically, the program has been underfunded, undervalued and behind schedule, according to the UCS report.

"It's essential that the United States devote sufficient resources to monitoring its arsenal," said Coyle, who worked at the Lawrence Livermore National Laboratory, one of the three federal nuclear weapons labs, for more than 30 years. "Without that information, the NNSA could be flying blind."

Dismantling weapons also should be a top priority, the UCS report says. In December 2010, the United States and Russia signed the most significant nuclear arms-reduction agreement in nearly two decades, setting a cap of 1,550 deployed, long-range nuclear warheads for each side. The NNSA doesn't plan to begin dismantling any warheads retired under the treaty, known as New START, until 2023 and won't finish before 2038. Future U.S.-Russian agreements likely will cover the thousands of warheads both countries keep in storage, which would further slow down the dismantlement process.

Finally, UCS says new verification regimes will be critical to ensure compliance with future arms reductions agreements. Currently the United States and Russia only verify the number of each other's delivery systems, but they likely will reach a point where they will require warhead-level verification, and that poses greater technical challenges. The NNSA's support for research on verifying reductions, however, has declined over the past decade.

"Given that it will be more difficult to verify nuclear reductions at low levels, the NNSA needs to devote more time and resources to developing the technology and expertise to ensure all parties to arms reduction treaties can confirm compliance," said Gronlund. "The NNSA has to make sure U.S. weapons remain safe, secure and reliable, but it also has to keep its eyes on the prize, which is downsizing nuclear weapon stockpiles worldwide."