After a week off from ABC's Lost, we dove right back into the story. The Oceanic Six are back on the Island, but they are the odd men (and women) out. Ever one for transitioning smoothly, Jack seems like a lost little boy when he finds himself in the shadow of LaFleur (Sawyer) while Kate is getting power-played by Juliet. Hurley is taking a back seat at the moment. At least Sun seems to have some stones. She totally played Ben and I loved it! Of course, she is in for a long journey of her own. Somehow she is going to have to either go 30 years into the past, make some kind of rip in the space-time continuum, sit and wait for Sawyer and crew to come back, or find a 60-year-old Jin. How do you think that is going to play out? 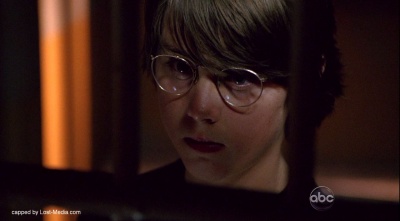 There are major rifts being built between our Losties and I don't know how they are going to mend them. I'd even say that they are more separated now that they are together than when they were miles and decades apart. To even further complicate things, Sayid is jailed as a Hostile/Other. I don't know what they are going to do to fix that situation. I see no way out of that one. Also, how appropriate is it that a young Ben confronts an incarcerated Sayid? It wonderfully calls back to one of the best season 2 episodes, "One of Them," where we learned how Sayid became a torturer and he tortured Ben (then going by the name Henry Gale).

This episode was not a barn-burner on the theory front. I think the only major theory to come from this episode (thus far) centers around Ben and Sun. Why were Ben and Sun not flashed back to 1977 Island time like Jack, Kate, Sayid, and Hurley were? Is it possible that they landed in the present day because they were actually already there in 1977? We saw an adolescent Ben, but could a young Sun be there as well? If so, then who are her parents? As far as we have known, the Paiks have been her parents and that still may be, but is it possible that it was Sun, not Miles as it is widely theorized, who was the screaming baby at the beginning of Season 5? Is she actually the daughter of Pierre Chang? I personally don't think so, but it would be one hell of a twist.

Speaking of twists, something is definitely brewing. When Frank was valiantly landing the plane (he's proven time and time again he's a damn good pilot), his doomed co-pilot was calling mayday and the only response he got was the transmission of 4-8-15-16-23-42. Here is the problem: Rousseau changed it to her distress call in 1988. Also back during "This Place Is Death," when Rousseau's crew picked up the numbers broadcast it sounded an awful lot like Hurley saying the numbers. It seems like something is going to sneak up on us and put our jaws on the floor. What do you guys think?

• The Muppet Show: Anyone catch Kermit the Frog on TV in the Flame Hatch? It must be pretty sweet to get paid to listen to Geronimo Jackson, eat brownies, and watch The Muppet Show all day long. What do you need to score on your aptitude test to get that gig?
• Claire in the Cabin: If you look very closely in the background of the scene in the cabin between Christian, Lapidus, and Sun, you'll notice a blonde woman standing behind Sun in the upper right corner of the screen. It's right after Christian shows her the picture of the 1977 Dharma recruits and tells her she has a long journey ahead of her. Is that blonde woman Claire or was someone unintentionally standing in the shot while they were filming?
• Smokey in the Barracks?: We heard the Smoke Monster appear on the dock when Sun and Lapidus where walking towards the barracks, but he also seemingly makes an cameo when Lapidus and Sun meet Christian. Is he protecting Christian or he is protecting Lapidus and Sun? Or is Christian/Jacob a manifestation of the Smoke Monster
• The Whispers: The whispers were heard for the first time this season as Sun and Lapidus entered the Barracks. I've listened to the audio forward and backwards as well as normal and slowed down, but I can't make it out. Anyone figure out what they said this time?
• Chang's Swan Uniform: Pierre Chang wore a Swan Hatch logo on his jacket in the Dharma orientation video that was played for Jack, Kate, and the rest of the recruits. Yet we hear about plans to build the Swan Station from the "can't ever imagine how he'd go crazy" Radzinsky. Explanations?

That's all I've got for this week's episode. If you're looking for some extra Lost fix, tune into www.ustream.tv this weekend from 5pm on Saturday, March 21 to 6pm on Sunday, March 22. My podcasting co-host Jack and I will be hosting a 25-hour podcasting event to raise money to benefit Autism Speaks. It will be broadcast live thru streaming video from Raleigh, North Carolina. We'll have two separate "Lost" panels with several different "Lost" podcasters - one at 11:30pm and the other at 11:30am. Oh yeah, and Jorge Garcia will also be appearing on Sunday afternoon to answer fan questions.

If you have any questions or would like more information about attending, watching, the schedule, or making a donation, email LPDonate@gmail.com.