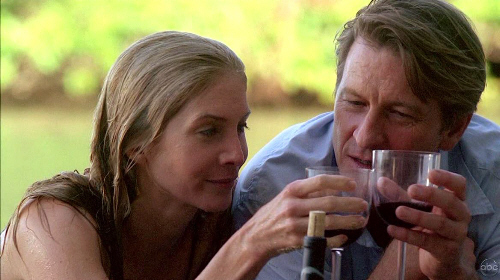 Oh how the plot thickens... Ben wants to be with Juliet, Juliet wants to be with Jack, she was having an affair with Goodwin, but Ben sent him to his death. Goodwin's wife Harper knew about the affair and has it out for Juliet. Not to mention that Kate has it out for Juliet. Kate can't decide whether or not she wants Jack and Juliet disrupts her ability to bounce back and forth between Jack and Sawyer. And now Juliet fears her interest in Jack will bring about his demise courtesy of Ben.

Now, this episode was not the mind-twisting, make-you-not-sleep-for-days-processing-theories-of-time-travel-and-consciousness that last week's "The Constant" was, but it did bring about a whole lot of character/relationship development. Man, I miss the days when we had the simple love triangle of Jack, Kate, and Sawyer. In true Lost style, the love triangle expands and becomes a complex "Love Pentagon" featuring the players Jack, Kate, Sawyer, Juliet, and Ben. While last week's episode may have been perfect for the mythology and theorist enthusiasts, last night's episode was one for the shippers. Oh and did I mention that once again Ben has Locke wrapped around his finger. Will he ever learn?

Here are some major points from last night's episode "The Other Woman:"

Last night's episode had major developments in many of the relationships on the island, both past and present. At the center of all of this was Juliet. We found out that Juliet's relationship with Goodwin was in fact a scandalous affair, and that Ben had a major possessive crush on her. Flash forward to present day island time: Jack and Juliet's relationship took a big leap at the end of the episode when Juliet revealed her feelings towards Jack and he responded with a kiss (Juliet told Jack how she felt in order to forewarn him of what Ben will do to him because of it). Should Jack be on the lookout for a vengeful Ben? Should Juliet be on the lookout for a vengeful Kate for that matter?

Why do things that could help the characters, things that they should know be hidden from them? If the Others are good guys, why couldn't they just be up front about it when the Losties landed there? It would have saved a lot of lives on both sides. Now we have the new Freighter people doing the same thing. Instead of telling the Losties what their plan was, Charlotte and Daniel decided to not tell anyone what was up and that possibly could have lead to more deceased island members. Daniel and Frank seem to want to work with the Losties and help, but the rest prefer to leave everyone else in confusion. Come on Freighties -- let's give peace a chance.

Charles Widmore aka "The Man"

Charles Widmore has quickly become a pivotal character in the last two episodes. While he has been theorized to be one of the major players for quite some time, this episode confirmed it. Ben's hidden camera footage of Widmore beating up one of Ben's informants was pretty incriminating evidence. Who was shooting the tape? Last week, we had Widmore purchasing the ledger for the Black Rock. Was there a clue on how to get to the island? Is Widmore the famed "Economist"? Was Widmore's sailboat race around the world just a ploy to get Desmond to crash on the island? Did Widmore then use his daughter's love for Desmond to let her search for Des, and in turn find the island? Ben believes that Widmore wants to exploit the island; is he right? Or is another one of his deceptions? One thing for sure is that Widmore is now an important character and I can't wait to see his story unfold.

Easter Eggs, and Side Notes

All in all, this was another great episode. There is no way it could have lived up to last week's episode, but there was still a lot of solid character development. The story has continued to move at a wonderful pace, and next week we will have our last episode before a one-month hiatus which will allow the writers to catch up from WGA strike. So let's assume some serious stuff is going to go down.