I know I don't. I think most of these memories are so old, the stories and characters so deeply ingrained into our psyches, that many of us have no idea where or when we first experienced them. They're just a part of us. We know the sky is blue, we drink when we're thirsty, and that there were precisely three little pigs.

Every culture has its own favorite fables, of course. But the lessons in these tales have always drawn similar, universal blueprints for how we experience and react to the world and people around us. That's why we're all taught them, that's why we remember them, and that's why we choose to pass them on.

But while a story like 'The Ugly Duckling' may be dear to us all...that doesn't mean we necessarily need to hear it yet again. After all, who doesn't know it back to front? There's something fun, though, about catching up with a character like the Duckling in a brand-new context -- before, after, or in somewhat twisted parallel to the adventures we know by heart.

That's part of why TV shows like Grimm, movies like Snow White and the Huntsman, comics like Fables, and even Broadway musicals like Wicked have all proven popular. These revisits have a certain built-in power to them, because we the audience are instantly connected to the characters, already invested in their lives and histories before they say a single word. It's sort of like meeting up with a lifelong friend after a too-long absence. You used to know everything there was to know about them, so now you've just got to find out what you've missed and where they're going next.

That is the power that Chris Stevens decided to harness, and have fun with, when he first landed on the idea for the book that would become Once Upon a Time Machine ($24.99, Dark Horse.) It would be an anthology graphic novel, where each story would conjure up a unique new futuristic context for a classic tale. The thought was so loaded with possibility, so intrinsically magnetic as a creative challenge, that it attracted over ninety contributors, by the final count -- including me (the book's editor, and one of its writers). Fairy tales in the future.

Comics are, of course, an inherently visual medium of expression. But unlike others, such as film or theater or video games, a story told through comics is limited only by the imagination and talent of the artists behind it. No budgetary or technological restraint will ever have to dictate how a comic's story is told.

Chris saw one way (of many) to take advantage of that freedom unique to comics: ask an eclectic and international collection of creators to imagine stories in the future... any future, near or far. The ruins of an American metropolis, a partially colonized alien planet, a lonely outpost in deep space -- if part of Once Upon a Time Machine's mission was to tap into our primal knowledge of certain old stories, why not do so as creatively and excitingly as possible?

We'd let our writers weave un-thought-of worlds, revealing new truths and wrinkles and perspectives to the characters we all love and to the lessons we've always taken to heart. And we'd let our artists run wild, showing us things that we've never seen before...things that could only exist within wildly creative minds dreaming of unknowable frontiers.

Fairy tales are so ubiquitous because they tell us something about ourselves and the world around us. And as the world around us changes, there will be new lessons to tell. But that doesn't mean the classics should, or will, ever be forgotten. They are endlessly adaptable. Only time will tell what the world has in store for us and our oldest, fictional, childhood friends.

You may not remember hearing all of these stories for the first time, but sometimes it's the retellings that stick with you. I know I still remember discovering, with a six-year-old's guilty glee, how much The Stinky Cheese Man could improve on an old standard. I remember first finding Baba Yaga, scarier than ever, in the pages of Hellboy. And I remember hearing Johnny Cash ask in song as John Henry, "Do engines get rewarded for their steam?"

As a storyteller, the best I can hope for is to leave such a mark on readers -- to give them a reason to get excited again, and show them that our favorite stories never stopped being relevant. Because even your oldest friends can surprise you.

Why not catch up with a few in the slideshow below?

PHOTO GALLERY
Once Upon A Time Machine
Download
Calling all HuffPost superfans!
Sign up for membership to become a founding member and help shape HuffPost's next chapter
Join HuffPost 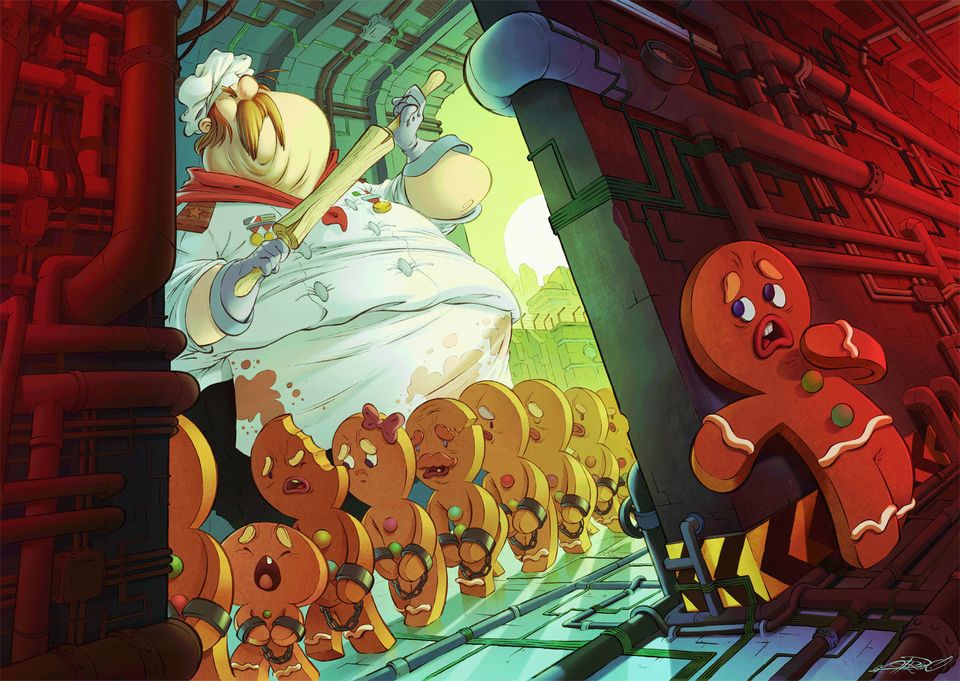