The election results are in and we're left with the unsettling reality that some of you, our neighbors, will now be representing us in office. Because you'll soon be making some very important decisions, I'd like to take a moment to share some thoughts regarding your new position.

First of all, congratulations on receiving the majority of votes from those citizens who bothered to show up on Election Day. Do yourself a favor: add up the total number of votes you earned, then divide them by the total number of available voters in your region. Depressing, right? (And you were the winner!) More importantly, look at the large percentage of people who didn't vote for you. This will be an important number to remember later on when you fool yourself into thinking you were given office by Divine Right.

You're not alone in wanting to put the election process behind you. If percentages hold, your election started out focusing on all the positive things you could do before it devolved into mudslinging and doomsday scenarios should you lose. Some of you embarrassed yourselves with fibs or outright lies, hoping voters were too stupid to see through your rhetoric. Others hid behind political action committees (PACs) to keep your hands clean while selling your soul to outside interests.

Don't worry -- we won't hold it against you. We voters have notoriously short memories by the time the next election cycle comes around, so we get what we deserve. We have to live with the monsters we feed.

The process by which we elected you is imperfect at best. Heck, what few debates we had wouldn't work for a middle school debate team. Moderator questions were dismissed entirely as office-seekers pimped their talking points. A good drinking game would be to throw back a shot every time you hear a candidate begin a reply with, "I want to go back to what was said earlier..." Some of you even ignored attempts by newspapers or the League of Women Voters to publish your platform. Why anyone would vote for candidates with "No response received" next to their names is beyond me. If you don't take your responsibility to communicate your position to voters seriously before the election, how can we trust you to do so afterward?

Still, here you are. I don't envy you the coming days when the weight of your election promises settles around your shoulders. You said an awful lot of things you knew we wanted to hear, and now you actually have to do them. You'll have to cobble together a consensus to do this even though many of you won the election on a platform of division.

Well, at least you'll be able to hide behind your political party while trying to think of something. Remember when party politics was reserved for national races? Now, even zoning and education board candidates cling to party platforms like drowning sailors to lifeboats, adhering to party "group think" obliviously unaware that no one group has all the answers. They meet and vote in blocs rather than investigating merit, indulging in the refuge of the weak.

Some of you will forget you were elected to service positions (not you, of course -- I mean the others). Allow me to remind you about some of the stuff you should've learned in Civics class. 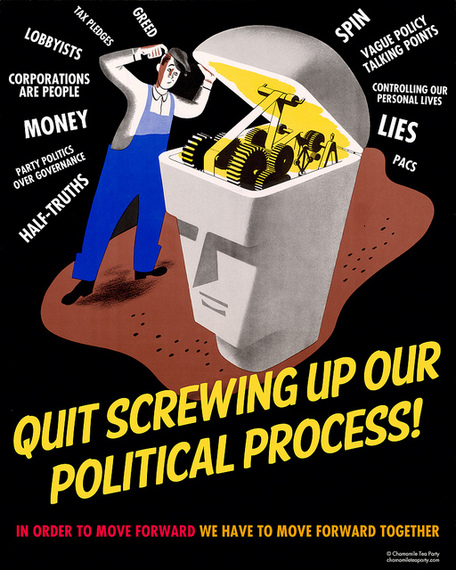 Created by Outtacontext and licensed under the Creative Commons Attribution-NonCommercial-NoDerivs 2.0 (CC BY-NC-ND 2.0)

Finally, remember you represent the people who voted you into office, not a political party or faction. Act like it. Elected office is an honor we've conferred upon you -- your job is to continually prove yourself worthy of holding it.

Humility is not weakness. Gratitude is not fawning. Compromise is not defeat.

You promised you could fix things. Kindly have at it.