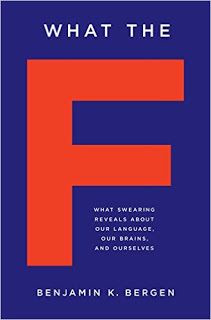 Joan Acocella has written an essay about fuck books ("'Fuck'--ing Around," The New York Review of Books, 2/9/17). Not an essay about fucking, mind you, but about the word "fuck." The two books under consideration are What the F: What Swearing Reveals About Our Language, Our Brains, and Ourselves by Benjamin Bergen and In Praise of Profanity by Michael Adams. But a number of other classics on the subject with colorful titles such as The F-Word and Holy Shit: A Brief History of Swearing are cited. Acocella points out that "Until well after the Renaissance, the words that truly shocked people had to do not with sexual or excretory functions, but with religion--words that took the Lord's name in vain" and she quotes a section from a fourteenth-century medical text that would raise eyebrows today, "in women the neck of the bladder is short and is made fast to the cunt." How many OBGYN's feel free enough to use the C word with patients in stirrups? Acocella points out that "profanity seems to originate in the more primitive limbic system" which may account for its more profound emotional effect than normal language and her piece is full of uproarious anecdotes like one in which the pope said "in questo cazzo ("in this fuck") rather than "in questo case ("in this case") in one of his speeches. Reading Acocella's piece one marvels that Mario Savio's Free Speech movement began on a college campus, where using the C word today ignites the use of another word, "trigger," whose meaning has gone through a major evolution from being the part of a gun to a sanction on the use of language.