What happens when a historian brings his love of the fantasy genre to crafting a trilogy? In the case of Michael Livingston's adrenaline-pumping Shards novels, what you get resembles a cross between HBO's Rome and Game of Thrones. Set in the era of the Roman Empire, featuring such famous figures as Cleopatra and Augustus, Livingston's novels are cinematic in their immediacy, bringing historic characters and battle scenes to life. The addition of magical artifacts, known as the Shards, makes for an intriguing take on what determines the fate of empires.

The Shards of Heaven and The Gates of Hell, the first two installments in the trilogy, are out now from Tor Books. I caught up with Michael to talk about the intertwining of magic and history, his unparalleled rendering of ancient Alexandria, his inspirations, and more. 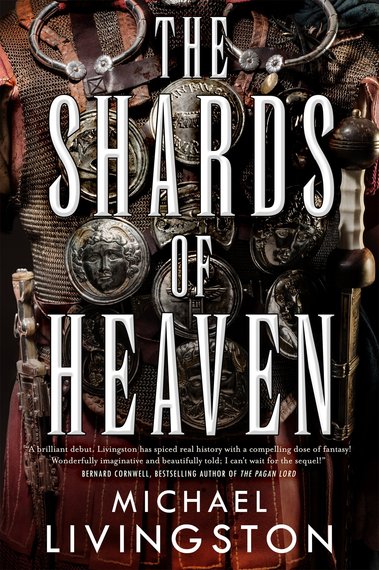 Thanks for taking the time to talk with me. It's an honor to be interviewed by someone whose work I've both read and admired.

Well, I was a Tolkien fanatic from fairly early on, and as a kid I devoured fantasies. So it is no surprise that my first novel -- which surely won't ever see the light of day! -- was a straight-up secondary-world fantasy. As time went by, though, I grew more and more deeply in love with our own past. And not just history, but mythology and religion, too.

In large measure I suspect the Shards series was an organic development from these various loves. Historical fantasy allowed me to first bridge and then fuse all my interests. So the Shards of Heaven series is a fantasy of ancient mythological magics that fills in the gaps of our very real history from Rome to Egypt, from Jerusalem to the lost city of Petra. It is, in other words, everything I love.

I don't know that I have any business declaring one genre or mode of writing harder than any other, but I can tell you that the biggest challenge for me in all this was trying to keep my balance between the need to reveal the power of the magical artifacts in the plot and the need to preserve the known facts of history. It would have been an amazing story, for instance, to have Cleopatra Selene -- the daughter of Mark Antony and Cleopatra and one of my favorite characters in the series -- grow up to use the Shards to destroy Rome in some cataclysmic doom. But that would be alternate history, which isn't what I'm doing.

Instead, I have to show the very real power of these mythical objects, and establish all the tensions of an adventure-thriller, without shattering history. That's hard, but it's also a lot of fun.

I really appreciated the chance to soak up the atmosphere of ancient Alexandria, a place with so much importance in Egyptian history. What was essential in your research for bringing this place to life?

I'm a medievalist by training, so when I was going into this series I knew Alexandria mostly by its already legendary status in the Middle Ages. Discovering the centuries-earlier lived-in reality meant that I needed to do a lot of research. There were studies of Cleopatra and her family, of course, and I absorbed every contemporary description of that world that I could find.

Most fascinating to me, though, was all the archaeology that's been done. Ancient Alexandria has been largely absorbed by the modern city, but a significant portion of the ancient harbor -- including palace structures in which Cleopatra would have walked -- was swallowed by the sea on July 1, 365 after an enormous earthquake off the coast of Crete and its ensuing tsunami. In recent years, researchers have been diving into the Mediterranean and literally rewriting the map of what Alexandria looked like. Going through their reports and imagery was marvelous.

This accumulation of research not only resulted in what I think is the most accurate depiction of ancient Alexandria yet attempted -- the map I made was recently utilized by an Egyptian archaeology journal -- but it also brought lots of opportunities for fun Easter eggs. There's a scene about a third of the way through the first book, for instance, in which Caesarion, the son of Julius Caesar and Cleopatra, is staring at a statue of himself. That statue, as it happens, is the same one that was pulled from the bottom of the Alexandrian harbor in 1997 during an underwater archaeological research campaign led by Franck Goddio. I can't get enough of those kinds of details. I'm such a geek!

Can you talk about how you came to the idea of the Shards, which has roots in the history of religion and philosophy?

Whether I'm wearing my professor hat or my writer hat, my approach to the world is to ask question after question. In my most recent academic book, for instance, I showed that the Battle of Crécy, which was fought over 600 years ago, could not have taken place where centuries of tradition and scholarship said that it happened. The key to that discovery was not due to some act of genius on my part, proud though I am of the work. It was instead just me asking questions, including the most basic ones that people take for granted -- like how do we know the battle happened here?

The same kind of process was at work in creating the Shards, which are a complex amalgamation of history, mythology, religion, and philosophy. They came about because they enabled me to ask and then answer an enormous range of historical questions. The Staff of Moses and the Trident of Poseidon have a lot in common in terms of their powers and descriptions, for example, so what if they were the same thing? In short, could there be real artifacts behind both the myths and the bizarre twists of history? If so, where did they come from? How did they get their powers? Where are the objects now?

It doesn't take long to build an exciting new history from such avenues. I love doing it, and my fans tell me they love reading it. 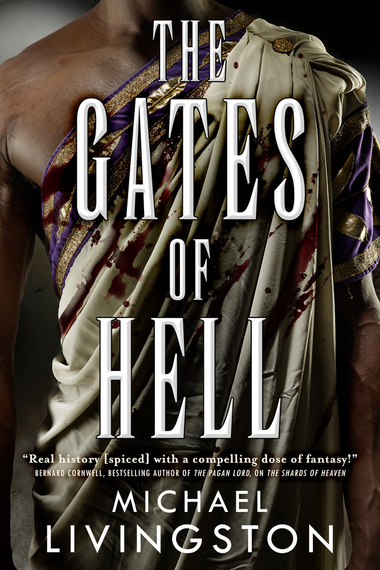 You've written extensively about Robert Jordan's Wheel of Time and its importance to you. How has this iconic series figured in your life and work?

By dumb luck I became a first-edition fan of Jordan's work as it was coming out. I was the right age for it, and I have to say that it really opened my eyes to post-Tolkien possibilities for fantasy. My awareness of how far Jordan was stretching the mythological envelope struck me both early and hard, and in numerous venues I have therefore argued that the Wheel of Time is in many regards the most fitting American heir to the world-building techniques forged in Tolkien's Middle-earth. So just at a level of creative inspiration, my debt to Jordan is significant.

Beyond that, Jordan has had a personal impact on me. By the strange twists of fate I became a professor at his alma mater, The Citadel, and before the tragedy of his death I had the chance to meet him. Months later, after his passing, I was asked to give the academic speech inducting him into the South Carolina Academy of Authors. He had left us not long before, and his wife and family and friends were sitting in the front rows. It remains the hardest speech I've ever given in my life, but through it I became close friends with the generous members of Team Jordan. Their friendship will be of lasting importance in my personal life.

Do you think being a scholar gives you a particular approach to writing fiction?

I think any writer is shaped by his or her experiences, though I don't know that I'm quite the right person to judge my approach. That's a job for my English professor colleagues. ::laughs::

What I will say is that my background means that facts are important to me -- no matter what our Denny's dumpster fire of a president-elect thinks. When I'm writing I want to get things as right as I can. The sights, the sounds, the smells, the textures ... I live in a kind of primal fear of fucking something up when I ought to have known better.

So I suppose being scholar makes me keep a careful eye on the small details even as I try to craft a grand theater.

Your books are liable to make people want to read more about Ancient Rome and Alexandria! What are some key history texts that you'd recommend?

Among modern texts, Adrian Goldsworthy is doing some remarkable work in delving into the history of the Roman Empire in probing but accessible ways, and one can't look into Juba and Cleopatra Selene -- one of the great unknown couples in history and key figures in my Shards series -- without looking at Duane Roller's The World of Juba II and Kleopatra Selene.

Mostly, though, I'd recommend people set themselves into the primary texts, the descriptions of these places and these times by the people who lived in them. There's nothing quite like seeing Rome through the eyes of a Roman!

The third and final book of the initial Shards trilogy is finished and will come out next year, so I'm really looking to start something new at this point.

In terms of fiction I'm working on a couple of projects. One is a historical fiction novel set in the Middle Ages -- it's my academic speciality and I'm building what I think will be a really great thriller plot to go with the hidden history of a pretty famous character. Much further along, though, is an epic-scale fantasy that I've been working on for years. It's got an enormous depth of world-building and a terrific plot. I suspect that will be the next thing on the docket, but as you know it depends on what editors are buying.

Again, thank you so much for the questions. Stay strong, everyone! 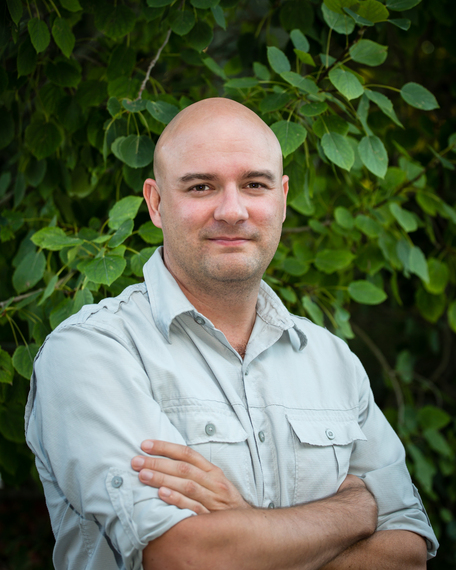 Michael Livingston's historical fantasy novel The Shards of Heaven was published by Tor Books in 2015; the sequel, The Gates of Hell, appeared in November 2016. An award-winning writer and professor, Livingston holds degrees in History, Medieval Studies, and English. He teaches at The Citadel, specializing in the Middle Ages and speculative literature.

In his academic life, he has published dozens of articles on subjects as varied as Beowulf, Chaucer, James Joyce, and J.R.R. Tolkien. He has investigated European maps of America that pre-date Columbus, found unrecorded Anasazi ruins and artifacts, and written about the handwriting of fourteenth-century scribes. He is the general editor of the Liverpool Historical Casebooks Series, for which he has edited casebooks on The Battle of Brunanburh (2011), the Welsh rebel hero Owain Glyndwr (2013), and The Battle of Crecy (2015).

He speaks frequently on medieval history and culture, on the impact of fantasy literature, and about how the Middle Ages continue to impact the modern world.