People have been trying to understand this business of love and relationships forever, and have tried just about everything - art, poetry, literature, psychology, sociology, biology, you name it. Yet we seem to be as confused as ever; why else would we be spending so much time talking, writing and worrying about it? The trouble is that our analysis is almost always subjective, biased by our experiences. So, how about trying something completely different that has never been tried before - the laws of quantum physics? Certainly, that's about as objective as we can get, with no ties to anything or anyone we ever encounter.

Quantum physics is really all about waves, so much so that it used to be called wave mechanics in its early days. It essentially tells us that at a fundamental level everything behaves like waves of energy and chance. Now, if waves truly underlie all of reality, it stands to reason that the rules that govern wave dynamics could certainly give us a few pointers about the dynamics of human behavior too, particularly as regards how and why our relationships fail or succeed.

Waves are really just patterns that repeat themselves - like ripples in the water or habits that people have. All waves are characterized by three features, illustrated in the picture below: Amplitude (the depth from crest to trough, which determines how strong it is), wavelength (the distance over which the pattern repeats) and phase (its relative sideways position from a vertical reference line). The favorite shape for a wave is the smooth undulating type, pictured here, known as a sine wave. Keep in mind though, the picture shows only a section of each wave, you should imagine they go on forever in either direction. 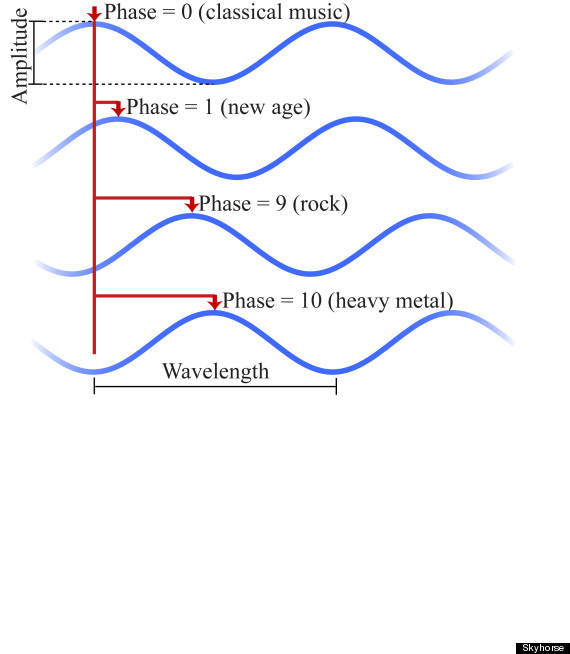 With these features in hand, the crucial step is to map people's personalities to waveforms, and we will use a simple recipe for that: We represent each facet of life by a sine wave of a particular wavelength - different wavelengths mean different facets. If a quality is strong and important in someone we give that wave a big amplitude, and if not, a weak or even no amplitude. For example, in the picture shown above, waveforms all of the same wavelength represent people's tastes in music. Different musical tastes are tracked by the phase shift sideways. Notice that since the pattern repeats after one wavelength, a relative shift of a half-wavelength is the maximum difference in phase that two waves can have, when the crests of one line up with the troughs of the other. We set up a sliding scale over that range, marking a taste in classical music at 0 for no shift at all and a taste for heavy metal at 10 for the maximum phase shift (assuming that they define the extremes of musical tastes). Everything else -- rock, pop, new age, country, folk, jazz, taiko drums, bhajans, and so forth -- are arranged in between, with similar tastes having proximate values, as shown for a few examples.

Now, suppose you happen to be an ardent lover of classical music, you have your car radio set to NPR and have lifetime memberships at all the major opera houses within a two hundred mile radius. One day, while sipping wine between the movements of a symphony you form a bond with another classical music diehard and it blossoms into a relationship. What happens when we combine the waveforms for your musical tastes? They have the same phase and so they line up perfectly, crest to crest and trough to trough, so the crests add up and become higher still and troughs deeper, resulting in a happier stronger wave. In the language of quantum physics your musical tastes are in constructive interference.

Now, consider the diametrically opposite scenario - by an odd twist of fate, you end up dating someone who is into heavy metal, who likes to play it loud enough to induce temporary deafness and refers to symphonies as elevator music. When we bring your musical waveforms together, now crests line up with troughs everywhere and so they cancel out and the amplitude of your combined waveform is very much diminished and almost disappears. Your musical tastes are in absolute destructive interference.

Well you get the idea - we could do this for literally every facet of your life, since there are infinite possible different wavelengths available to represent them. There are easy mathematical algorithms to combine all the waveforms for all possible facets, to create composite waveforms to represent even the most complex of personalities. Then, in order to see how you match up with someone, all we would have to do is combine your two individual waveforms, either facet by facet (one wavelength at a time as we did here) or all of them as a composite whole. Either ways, if the result of combining is a general increase in amplitude overall, you have found a good match; if on the other hand the combination turns out to be significantly diminished in amplitude due to destructive interference all round, then head for the door, for you just found the anti-you. What this tells us is that, don't fall for that 'opposites attract' bit - really, initial attractions aside, if you are dating someone with tastes and inclinations completely opposite to yours in everything, what would you ever enjoy together, what would you share - it is rather unlikely that it can ever lead to relationship bliss. It is just quantum mechanics.

Kunal K. Das is the author of The Quantum Guide to Life.