"I used to ride for Karl Marx, but then I met Emma Goldman." --Sole

Over the years, Denver indie hip-hop legend Sole has often taken on politics and at different times thought he was Noam Chomsky or Ben Bernanke, but this time, on his new track from his forthcoming album Sole thinks he's turned into iconic anarchist-feminist Emma Goldman.

Released Thursday, "I Think I'm Emma Goldman," produced by Madison-based Pain 1, is Sole's latest track and an early peek at what his forthcoming album "No Wising Up, No Settling Down," a second installment of his critically acclaimed 2012 album "A Ruthless Criticism Of Everything Existing," might sound like.

Via statement, Sole describes "I Think I'm Emma Goldman as an attempt to explain his understanding of anarchism.

Anarchism is the basic belief that bosses, religions and governments stand in the way of people achieving their true potential. Almost any critique that is leveled against anarchism can easily be inverted against the state; who is responsible for all the violence in the world? Who is responsible for keeping people poor and uneducated? Who is upholding the will of capital over the well being of people?

This song talks about how anarchist theory has informed and shaped the movements happening around the world in the past year, from Occupy Wall Street and its offshoots; Strikedebt & Occupy Our Homes, to Food Not Bombs, from the rise of theBlack Bloc in Egypt, the daily battles in Greece, to the Tarsands Blockade. History has always proven that the only real change that has happened in this world was because people put their bodies on the line and took Direct Action. I see it as an ideological framework to practice in every day life, the desire to want to help others, and the will to resist.

Coming out May 1st, Sole describes "No Wising Up, No Settling Down's" inspiration and what fans can expect from the sound on his website:

N.W.U.N.S.D. focuses more on the personal and social/philosophical aspects of the class struggle and abandons the more overtly political song writing for a more subtle, honest, experimental and poetic approach. Although this album contains pop elements seen in the past few sole releases, this album also harkens back to classic sole stream of consciousness poetry and noise styles.

Sole recently chatted with The Huffington Post about the making of the video and the themes expressed in the song.

The video has a really interesting style, is it found footage? How many hours of video did you have to go over?

I probably spent 30 hours or so compiling footage, filming and editing it, but all the footage I used was lifted from online sources, definitely didn't go through any tape. I sent a nearly completed "sole quality" video over to filmmaker Franklin Lopez, the Editor, and took out all the lazy b-roll I had. Then he went through the b-roll I added and picked some better moments and then knocked it out of the park, he spent 4 or so days on it, not sure how many hours, but from the end result I imagine a lot. I have been following his work at submedia.tv for years so getting a finished video back from Frank was surreal and amazing.

How did you get turned on to Emma Goldman's philosophy, activism, writing? What inspired you to write this ode to her?

Around 2001 I was telling artist Ravi Zupa about my ideas about my ideas for a collective label and my philosophy in general and he just said, "you are an anarchist." He then gave me "Anarchism and Other Essays," and I agreed that I was. I always tip-toed between the more Marxist-inspired situationism and anarchist ideas, and it wasn't until I started reading Emma's ideas about "free communism" and Peter Kropotkin's ideas about "anarchist communism" did I fully realize how rich a tradition there was of merging the various schools of anti-capitalism to create a very possible and utopian society of free association, cooperation and un-alienated labor. I internalized so many of Emma's ideas, everything from rejecting heirarchy in both society and daily life, atheism, to supporting all forms of direct action, and standing up for the rights of the workers, the dispossesed and standing against the empire. Emma was a fearless individual in a time of great upheaval, whereever there was fire, Emma brought kerosine. I always refer to her as the female Malcom X. In this song I fail to attack patriarchy or make any nods to feminism, which I guess shows no matter how much you think you've smashed all the patriarchy in your personal life you gotta always kill that patriarch in your head! I always knew I wanted to write an ode to her, it wasn't until DJ Pain sent me a batch of beats did I feel like I could do it. The time was right, in the wake of Occupy and everything that is happening in the world Emma's work and anarchist philosophy (and practice) is more relevant than ever.

What can we expect from No Wising Up No Settling Down?

"No Wising Up, No Settling Down" is very different then "Ruthless Criticism." Ruthless Criticism is more worldly, aggressive and "finger pointy." Despite this single, No Wising Up is more poetic, more honest, more humourous, more experimental, the range of the music on this release is much different then ARCOEE. I've collaborated with a lot of producers that people will be very surprised to see me working with, and making new kinds of songs. I think this album is more inspired by the "friendly critique" style of folk-punk then the more "militant hip-hop" approach. This album will make people laugh, it'll make people wanna read, it'll piss some people off. All good things.

As this is a part two to the ARCOEE album, was it also crowd funded via Kickstarter? Were these tracks recorded during the same session?

No. This was not crowd funded, at least not through Kickstarter. Because I'm DIY, everything I do is crowd funded! How much tofu I buy (or if I can afford to stay gluten free) directly correlates to how many records/shirts I sell on any given day, and luckily people like buying shirts with squirrels with guns. This album came about because I just didn't give a shit. Spencer from Cobraconda came up to me at a show and said, "Hey let's do more music, fuck an album let's just make singles" and then I thought, yeah "fuck an album, I just wanna make songs!" So I started recording various songs with various people with no intention of making an album, and within a month I had a very different kind of album that captured a very different improvisational, free-wheeling, not giving a fuck style that ends up being one of my best and most unique albums. I guess I say that everytime, thankfully I believe it! This album is a testament to what you can do when you are DIY, when you have no bosses, no masters, no one telling what to do, when you can just follow your passions and create because you feel like it and can reap the rewards of your labor.

When can Denver see you perform these songs live?

I don't know. Right now I'm working really hard to create a new kind of live show, that is more of a musical performance involving samplers and trying to blend the more noisey/experimental "mansbestfriend" bedroom aesthetic with the classic Sole aesthetic. I've played enough shows off my laptop to know that it doesn't inspire me any more, when i go see those shows I get bored. I've been working hard on a new live set, but I want to spend the next few months making it the best I can. It looks like I won't be playing any club shows in Denver until June.

Watch "I Think I'm Emma Goldman" above. For more information on Sole follow him on Twitter or visit Soleone.org. 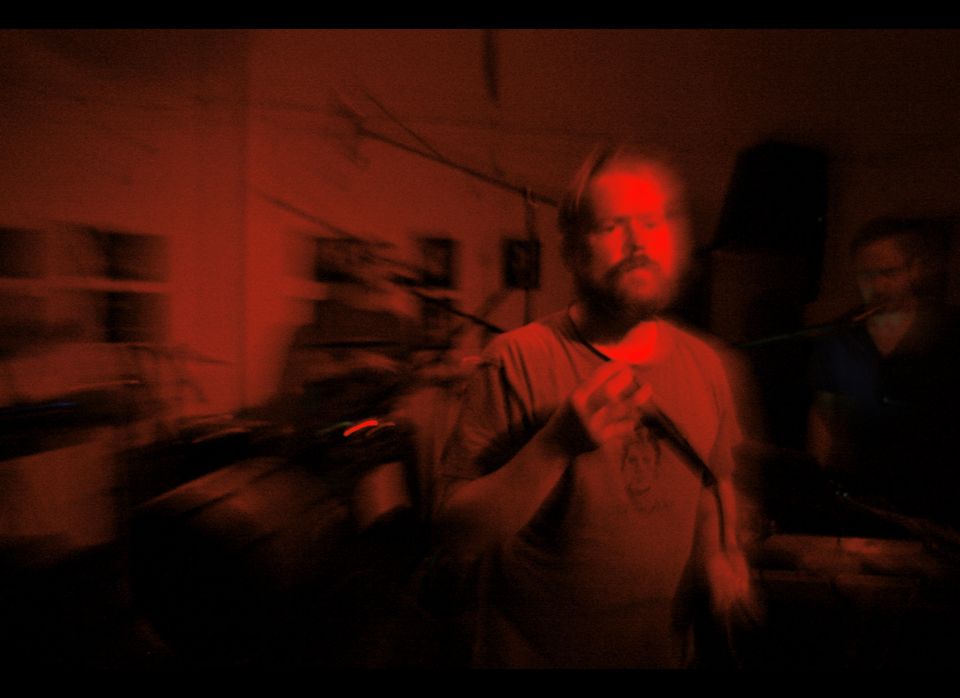