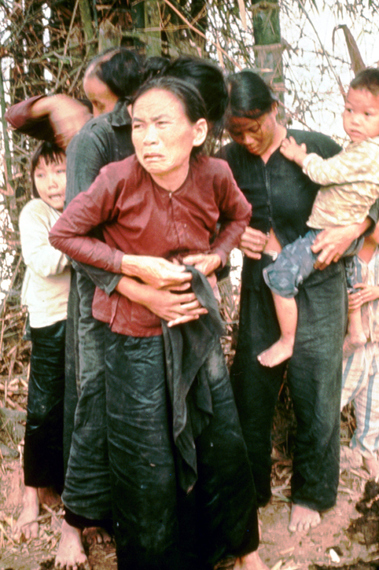 A recent BagNews post has caused readers to take a new look at a famous photograph from a Vietnam War atrocity. The snapshot--taken by Army Photographer Ronald Haeberle during the My Lai Massacre, in which over 500 innocent, unarmed villagers were killed--is commonly known as depicting terrified villagers moments before being killed by US soldiers. BagNews, however, adds more to the story. The author, Valerie Wieskamp, asks us to take a new look at the "Black Blouse Girl," the teenager buttoning up her blouse on the right side of the photo. "Why," Wieskamp asks, "would she be preoccupied with a button while the other people in the photograph were terrified of being killed? Why was the button undone to begin with?" It is because before the people in the photo were massacred, before the photo was taken, the girl had been sexually assaulted by a group of GIs. Wieskamp points out that although the sexual abuse connected to the photo is clearly documented in the official investigation of the massacre, it has been overlooked by the U.S. news media for years and is mostly unknown to the general public. As a result, this bit of history was "news" for many viewers. Greg Mitchell, writing for The Nation, features the post in his own blog. In the comment section, he writes, "As much as I lived though the period, and wrote about it, and protested, I didn't know the full story until this week."

Why has the full story been hidden for so long? The BagNews piece asks: "What are we to make of the informational erasure surrounding this iconic artifact of US history, one that indicates sexual violence in the plain light of day? And why is it that most Americans readily recognize the "Napalm Girl" but not the "Black Blouse Girl?"

Reader commentary holds clues that may provide some answers to the big question. It is one thing to read about sexual assault during war as an aside in a news article, it is quite another to actually see the anguish on the faces of the people who either experienced it or witnessed it themselves. The viewers who finally "saw" the sexual violence in the photo for the first time reacted strongly to the piece. Perhaps that is why the sexual assault remains hidden in plain site...

Perhaps this picture invites us to confront moments of our history that are just too painful. One BagNews reader writes, "Seeing and reading this just devastated me. It brought the full horror of My Lai and the Vietnam war back to me." A reader on a Reddit comment thread about the post describes the photo as "hard to look at," another writes, "Reading the story behind it just makes it all the more difficult, what a powerful image."

Perhaps this painful confrontation with history invites too many questions and critiques of war and sexual violence in the U.S. A commenter on the original post writes that the story, "Leads you to wonder how many assaults like this happened during the campaigns in Afghanistan and Iraq." Another reader comments, "It's hard enough for society to take rape seriously when it happens to a young girl at a party. It's even harder when it's surrounded by other atrocities. ... But it's a part of our history (and present). We need to see it."

For one reader, the answer to the question as to why the photo had been hidden in plain sight was quite simple. Stan B. writes: "Is it really that surprising when we still have so much denial about sexual assault within our own ranks to this very day over four decades later? If we don't even value the White women in our own military, how are 'enemy' women of color on the battlefield going to stand any chance?"

The public's response to the Black Blouse Girl reveals that, though it may be painful, we need to change the way the photo is presented. To come to terms with the full repercussions of U.S. wars, we need to pay attention to the sexual violence behind the button.