Forget any awards show squabbles amongst the rich and famous, Ricky Gervais is in the midst of a public argument with some of the most hateful people on the planet.

Gervais, whose Golden Globes hosting job in January ruffled a few Hollywood feathers, is an outspoken atheist, which has drawn plenty of public attention before. Both as a gag and a way to raise awareness for animal rights organization PETA, he's been holding the "12 Days of Rickmas," jokingly inserting himself in for Jesus Christ while suggesting followers do something to save animals each day.

Whether it's this stunt or other speeches, Gervais has drawn the ire of Christian fundamentalists over Twitter. One in particular, user @GodsWordIsLaw, has engaged with Gervais. The Twitter user, named Keith, is stridently anti-homosexual, a creationist, hateful of other religions and crude. On Tuesday, for example, he tweeted, "Happy Hanukkah to the pharisees...bah humbug #GenocideNow."

Gervais has, as is his wont, responded back, with creating a long dialog of both mocking and appeals to more reasonable readers that began with his response to Keith's post praising the death of Christopher Hitchens.

While the pair have fought, Gervais has also littered his tweets with appeals to more reasonable people, writing things such as, "To all sane Christians. I know you're not all like these evil fundamentalists. I don't believe in your God but I believe in your kindness."

The photo below comes from New Humanist Magazine, which interviewed Gervais about religion, and his upcoming new show "Afterlife," in which he plays God, earlier this year.

"I used to believe in God. The Christian one, that is (There are a few thousand to choose from. But I was born in a country where the dominant religion was Christianity so I believed in that one. Isn't it weird how that always happens?)," he told the magazine. " Luckily I was also interested in science and nature. And reason and logic. And honesty and truth. And equality and fairness. By the age of eight I was an atheist."

Here's a sampling of their ongoing back and forth, which started last week 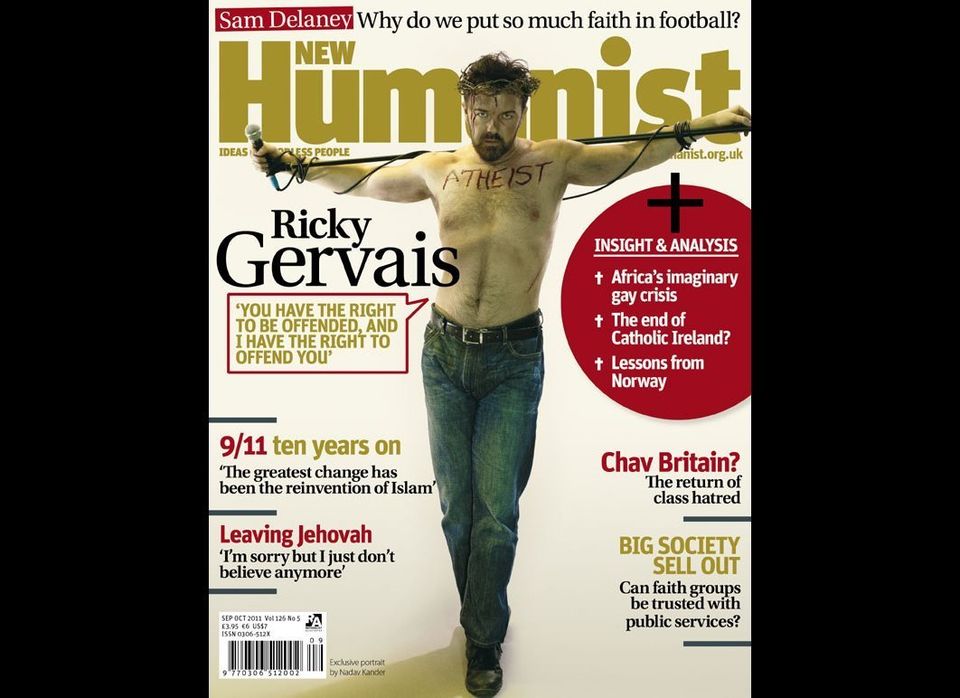