A light has gone away. The painter Melissa Carroll died March 31, 2014. She had Ewing's sarcoma, a vicious cancer that jumped to new parts of her body even as her doctors got its existing sites under control. Melissa was 31.

I wrote about her show "Recurrence" at Andrea Rosen Gallery 2 last year, and I'd like to share some more thoughts about her work and life with you today. I did not know her well. I only met her five times. This is a photograph of the first -- a show we were both in at Gitana Rosa Gallery, in Brooklyn, in 2010. She stands in profile foreground left. Her painting is on the back wall, and mine is on the left. The cancer was already in her foot, I think, but nobody knew. 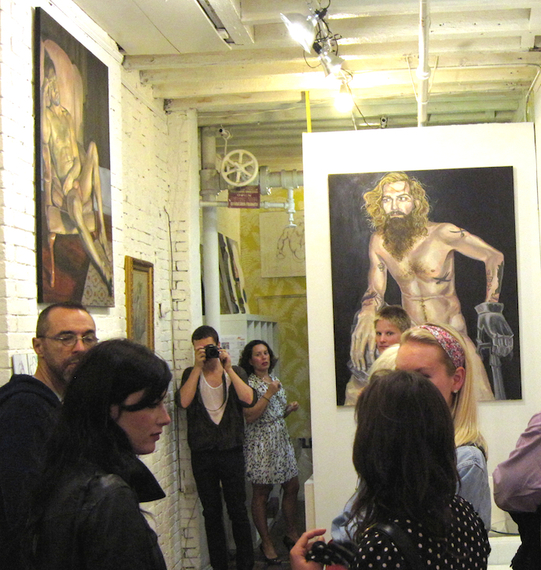 I followed her work from then on, and when she got sick, I followed that too. We corresponded a bit. I was blown away by "Recurrence," her body of work depicting herself and her friends at various stages in their struggle with cancer. I wrote at the time, and I'll repeat now, that she made the kind of breakthrough in "Recurrence" that artists ordinarily take another 10 or 15 years of practice, experiments, and creative leaps to achieve: she went from flexing her talent and following the work of others, to creating her own unique and mature art. She didn't have any time to waste. The second time I met her was at the opening of the show, in 2013. 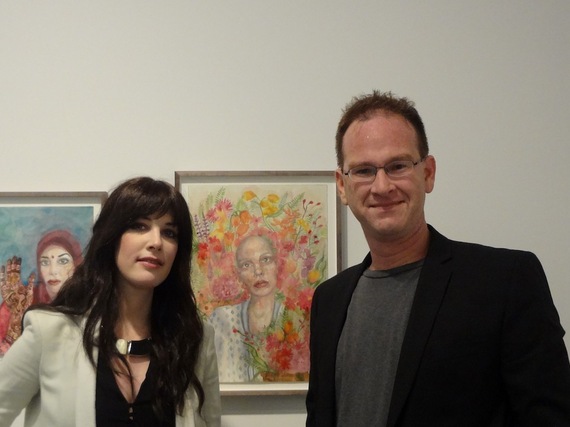 You can see me sweating; the room was packed and horribly hot. There were many beautiful people I didn't know, and many who knew Melissa and had more claim on her attention than I did. Salman Rushdie was there; the remarkable Ricardo Kugelmas, her friend and guardian angel in the art world, was there. I met her mother, Cecelia, who was as simultaneously proud and frightened as you would imagine. I didn't know what to say to Melissa, and she didn't know what to say to me. I think we were mutually happy to see one another. I didn't appreciate how tremendous a special effect her attendance at that opening was. They let her out of chemo for the week, and she was wired to half a dozen hidden devices and drips the entire evening, enabling her to stand, and talk, and withstand the pain.

The third time I met her I ran into her on the street in Williamsburg. She was back from her hospital universe, walking around and enjoying a pleasant Brooklyn afternoon. The fourth time I met her was at a craft fair. These two chance meetings are small demonstrations of a characteristic of hers -- to the extent she could go on living life, she did. She went to India. She fired a rifle. She had adventures.

The last time I met her I went by her apartment in Greenpoint to take some pictures of her for a portrait. I like to paint my creative friends, and I wanted to paint her. I was glad to see her. As usual, we struggled to make conversation. We were all right in writing but did not know one another well in person. She showed me what she was working on, and some of the keepsakes of her travels. I took a few pictures and made my goodbyes. I never saw her again. 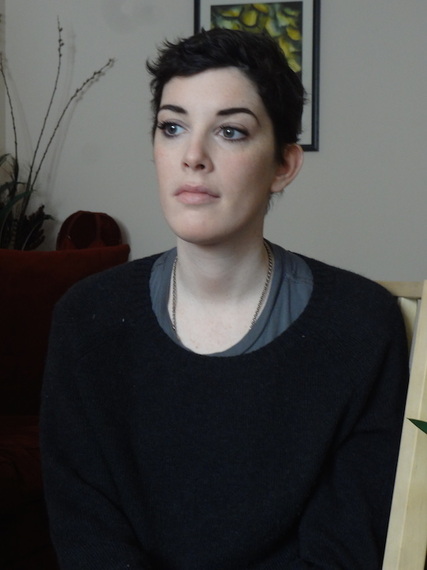 This was in December. Sometime after that, she made her final breakthrough as an artist, and that's what I really want to talk with you about today. We're here to consider her last three paintings (that I know of), and to mull them over in light of two categories of art: final bodies of work, and late bodies of work. All sufficiently late work is final, but not all final work is late -- Egon Schiele, for instance, had no idea he was going to drop dead from the flu at 28. He was just starting to get the body he craved into his dessicated oil paint surfaces. Whether this would have been better or worse than his early work, we can't say. It was promising, but it was cut short. It was final work, but not late work. 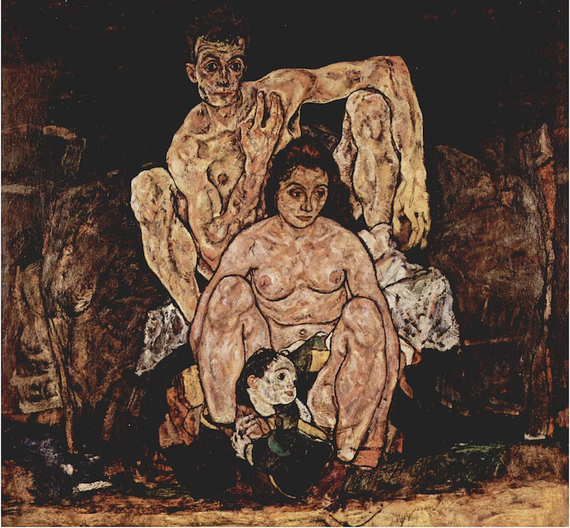 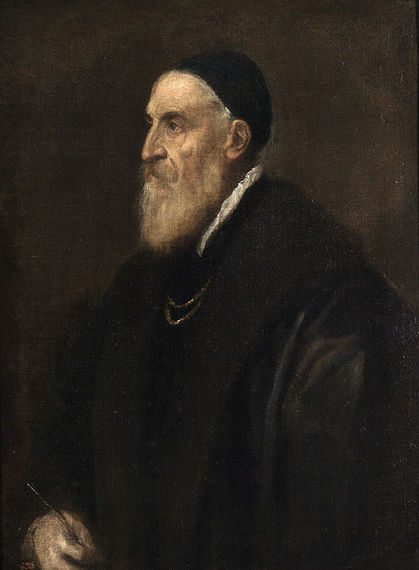 It partakes of one of the great privileges of age: cutting through the bullshit. The hand grows weak, eyesight fails. He paints simply, painting only what is needed, but that part that is needed, he paints with force and confidence. Considerations of being in and out of the zone are far behind him. He has fused entirely with his identity as a painter. He is always in the zone. He brings to mind the famous quotation from Hokusai:

From the age of 6 I had a mania for drawing the shapes of things. When I was 50 I had published a universe of designs. But all I have done before the the age of 70 is not worth bothering with. At 75 I'll have learned something of the pattern of nature, of animals, of plants, of trees, birds, fish and insects. When I am 80 you will see real progress. At 90 I shall have cut my way deeply into the mystery of life itself. At 100, I shall be a marvelous artist. At 110, everything I create - a dot, a line - will jump to life as never before. To all of you who are going to live as long as I do, I promise to keep my word. I am writing this in my old age. I used to call myself Hokusai, but today I sign myself 'The Old Man Mad About Drawing.'

Or let us turn to Picasso, who drew this less than a year before the end of his very long life: 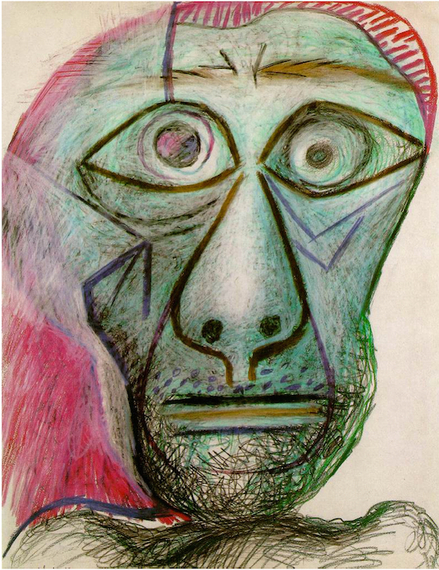 Picasso draws here his own unweaving. His face grows gaunt and stubbled, his eyes frightened and unfocused. A triangular wound opens his cheek on the left, and his blood pours out unchecked, the last blood he will ever have, leaving his skin cadaverous and greenish-grey. He is at the end of the long corridor, staring at the black wall at last. There is no way through it, it is the end. He addresses death and fear of death here, and not just any death, but his own. This is what we mean by late work.

Carroll painted this in 2013 for "Recurrence," depicting her own illness: 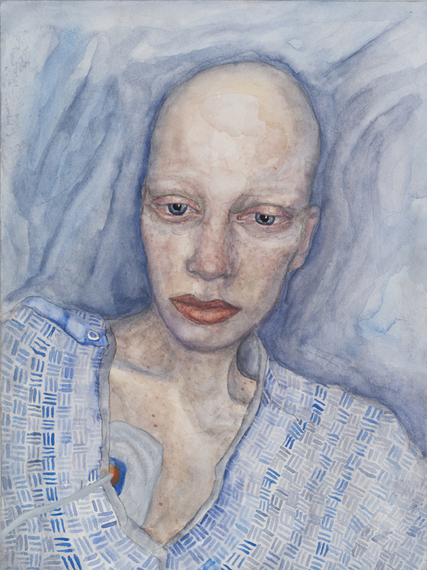 It is one of the pieces that struck me so strongly at the time. It still does. In this same pictorial paradigm, she groped toward a model of hopefulness in What Would I Do Without You: 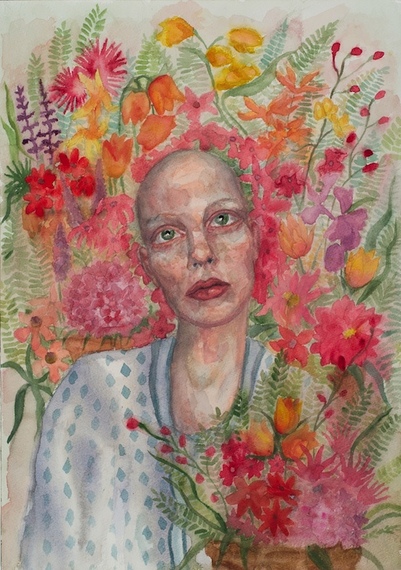 This is middle-period work.

Here is something Carroll painted in March. As I said, to my knowledge it is one of her last three paintings. I don't know its size or title, or if it even has one. It is watercolor on paper, the only paint nontoxic enough for her to use: 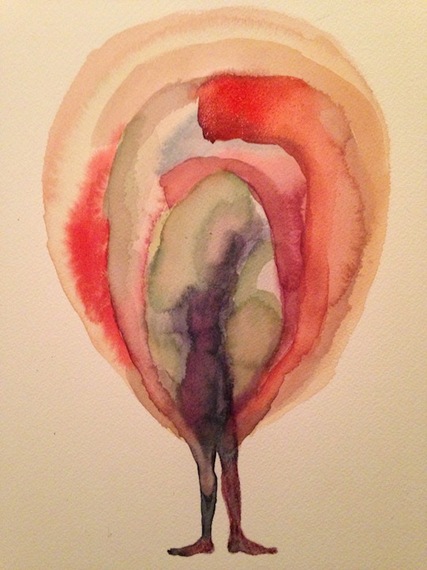 The figure is submerged here in a vaginal sequence of arcs of bloody energy, nearly vanishing, as the image nearly vanishes. As in the case of the aged Titian, the hand and eye weaken, and the interest in effects evaporates. There are only resources to paint what is needed, and the wisdom and insight to use the resources correctly. As with Picasso, there is almost no image, and death is the subject. 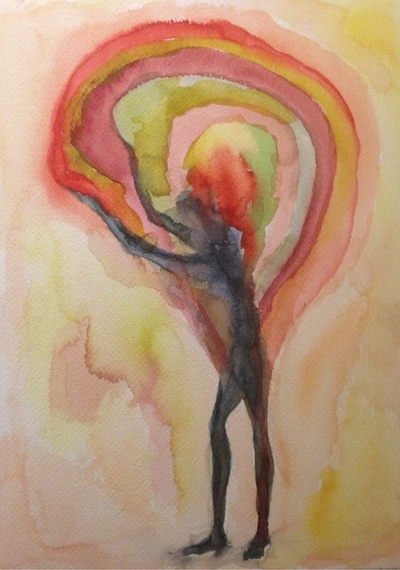 Carroll draws close here to the very heart of things. Her vision of human being dissolves into a vivid and vital universe which precedes and follows and surrounds it. In the hand of this awakened reality, what is important about a life, any life, persists, because it is only borrowed a little while from an eternal and active wonder. She reaches here, in her own way, the same conclusion Harold Brodkey reached when he too neared the end of his illness: "It is death that goes down to the center of the earth, the great burial church the earth is, and then to the curved ends of the universe, as light is said to do." 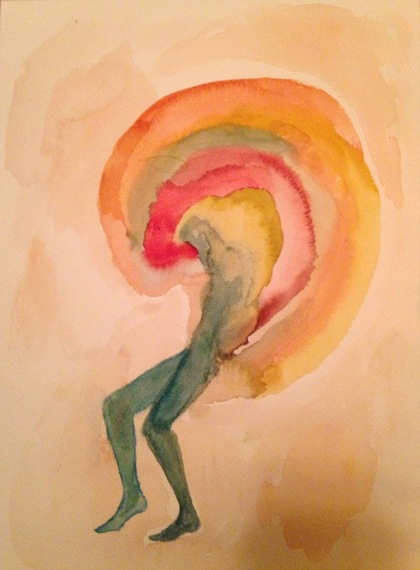 This is not only final work, it is late work. It is late work because she knew she was dying. Schiele was around her age, but he thought he had all the time in the world. Carroll knew her time was almost up, and this turned her thoughts not only to the subject of death, but her hand and eye and vision to the mastery needed to complete her work. Her life was short, but her work is not incomplete. She made the complete cycle of work of an organism designed to persist only 31 years. We are not missing the rest of her work, because that would have been the work of a fundamentally different Carroll. This is all of the work of the Carroll that was.

I knew her. Not as much as I would have liked, but more than most, and I count myself lucky for it. She looked like just another talented Brooklyn hipster when I met her. It would have taken her much longer to mature if her body hadn't betrayed her. Her disease gave her a binary choice: go over it or go under. She chose to go over it. The cancer kept getting taller, and she got taller to match it.

She was loved by her family and friends, and inspired in words and deeds many people who were suffering as she suffered. She lived fully. She became unbending of will and great of heart. She made the life she had make sense, but that speaks for her, not for me. For my part, I am so sad that she's gone.

All Melissa Carroll paintings courtesy of the artist and her family
Schiele and Titian via wikimedia commons, Picasso via artchive.com