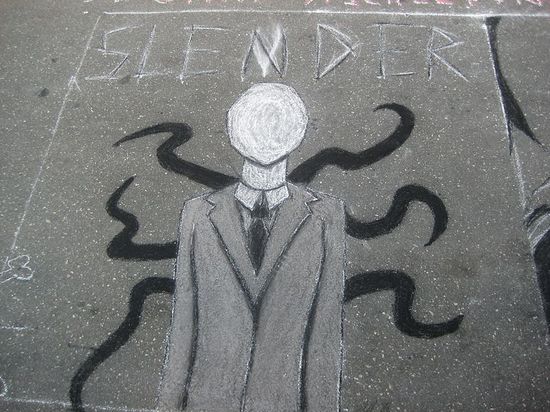 Slender Man is real. The product of a creative mind, cross-pollinated across the Internet, he is a fictional creation. But when two young girls tried to kill their friend as an offering to him last week, followed by two more attacks referencing him, he became a large enough part of our cultural conversation to make him reality.

Two 12-year-old girls in Wisconsin stabbed another girl 19 times to become "proxies" of Slender Man. A Cincinnati mother believes a Slender Man obsession is what led to her 13-year-old daughter attacking her. And a neighbor said the man who, along with his wife, killed two police officers and a civilian in Las Vegas on Sunday used to dress as Slender Man.

Much like violent video games, rock music, comic books and horror movies before him, Slender Man is on track to becoming the devil du jour, the newest "won't someone think of the children?" scapegoat.

Anyone who has been to a Halloween party in the last few years can tell you Slender Man costumes aren't unheard of, but this particular scapegoat is different. Especially because these attacks involve, not violent behavior supposedly stirred up by a medium, but by a literal monster. Also, this monster "lives" on the Internet, which some think of as an entirely scary place where bad things happen. So Slender Man is a Bogeyman from Bogeyman Land.

Still, while I don't know of a Slender Man story where he encourages sacrifices (which is not to say it doesn't exist on the big wide Web), there is more to this creature than just being an online creation. In fact, a contingent of the paranormal community believes this creature actually exists - either as a manifestation of our collective thoughts, or that he has been always been present in our world.

Appearing as a very tall, thin man with white, featureless face and tentacles spreading from his back, and always wearing a black suit, Slender Man was created by Eric Knudsen (posting as Victor Surge) and made his debut SomethingAwful.com in 2009. This past January, Knudsen told WNYC's "On The Media" he wanted to create "a creature that causes general unease and terror," and the being does indeed represent a mysterious danger whose intentions are unclear.

Though not exactly a fringe character on the Internet in the five years since he debuted in response to Something Awful's "create paranormal images" challenge - and subsequently became a topic for a lot of stories, Photoshop images, videos and so on -- Slender Man only became a household name last week.

Yet the concept behind Slender Man taps into something very old and familiar.

Modern myths and paranormal theories are rife with beings clad in black, and many times in black suits. Slender Man shares his DNA with folkloric beings like the Grim Reaper -- the personification of death -- ghostly monks, shadow people, Hat Man, Men In Black. These creatures have at times been thought of as harmless or even considered helpful guides, but much more often they represent a vague malevolence. They are seen out of the corner of the eye, darting around, or looming over someone as they sleep, and have been considered both supernatural and extraterrestrial.

Even within popular culture, we've seen a lot of dark, creeping creatures with odd features similar to Slender Man. (Cenobites from Hellraiser; Observers in Fringe; Strangers in Dark City; The Silence from Doctor Who; etc.)

Speaking of pop, I began Paranormal Pop Culture in June 2009. My purpose was to "explore the entertainment of the unexplained." I am not a ghost hunter or paranormal theorist, or even much of a believer. But from an academic standpoint, I am fascinated by how our legends and beliefs influence, and are altered by, popular culture. Slender Man is a pretty perfect example of that -- and the coincidence that he was created the same month of my launch is not lost on me.

But in the five years since I launched the site, and began speaking at events about various elements involving the crossroads of paranormal and entertainment, I've received numerous accounts from people claiming to have encountered Slender Man. Many of these stories supposedly took place before Knudsen first introduced his monster on Something Awful, and most of the "experiencers" claimed they had never heard of a "slender man" before.

Granted, I am incredibly skeptical. These stories could be the products of over-active imaginations or created by people desperate to feel special and receive some attention. Maybe they were mistaken in what they saw, were experiencing pareidolia, or had even become aware of Slender Man in some way and used that image to fill in mental blanks from their past. They could have been outright charlatans and liars as well - though I tend to doubt this applied to most.

One thing I definitely believe to be true is that, after a decade of paranormal programming and reality TV, ghosts have lost some of their entertainment value. If specters, and even demons, have become mundane, then a new kind of entity will become more popular. Just like vampires and then zombies, paranormal pop culture will look to a new extreme as another begins to seem pedestrian.

Further, it is curious how many similar accounts I've learned of from paranormal researchers. David Weatherly relays a few Slender Man stories shared with him in the final chapter of his book Strange Intruders. And "paranormal pastor" Robin Swope devotes an entire book to the phenomenon in Slenderman: From Fiction to Fact.

For those within the paranormal community who believe in him, of which there is a significantly increasing amount, there are typically two main ideas regarding Slender Man's existence.

One is that he has always existed. The suggestion is that either people are paying more attention to the unexplained, and discussing these topics, or that he is only now choosing to reveal himself. If the latter is true, the thought is he may have nefarious plans that are close to fruition.

The other theory is that we created Slender Man by thinking about him. Not entirely unlike Tibetan Tulpas, Slender Man may be a so-called "thoughtform." Through people dedicating energy to him, crafting stories, fleshing out characteristics, and talking about him at length, the theory is we may have collectively given life to the monster and allowed him to enter our realm.

If this sounds like something out of a Hollywood movie, it sort of is. Both the recent flick The Quiet Ones and 2012's The Apparition play on the notion of creating a supernatural force through scientific experiments and the focus of a group. But the films are in turn loosely based on the actual Philip Experiment.

In the 1970s, a group called Toronto Society for Psychical Research (TSPR) set out to create a ghost. The group crafted a fake biography for a 17th century nobleman they named Philip Aylesford, sketched a portrait of him, surrounded themselves with images of castles a noble man from that time might have lived in, and held a séance to summon him.

By visualizing Philip, they'd ask questions and claim they received answers in the form of raps on a table. The team supposedly experienced a mist forming over them, reported the table would move on its own and that Philip could dim lights on command. Eventually the experiment was performed in front of an audience of 50 people and a television crew.

This was not a paranormal home run and it remains contested. None of Philip's "answers" revealed substantial facts about him the team wouldn't have already known. But some believers think the team actually created Philip with their minds. Others say they summoned a real entity who just answered when they were trying to conjure Philip. And many others think the whole thing was fixed and a lot of bad science.

However, this is an especially creepy idea that, if a group of eight could manifest a tapping ghost, countless millions could manifest a Slender Man. Even if we don't bring him to life in a literal, physical sense, we have made him real. After all, we did it with Santa Claus.

The legend of the jolly old elf was collected and combined by several stories and folklore to become the benevolent seasonal visitor who shares top billing with Jesus every Christmas. We have taught children what Santa looks like, who he hangs out with and where he lives (and what his address is, since we send mail to him). Parents use him as a reward for good behavior, a threat for bad, and even take their kids to visit him - though they sometimes explain that the guy at the shopping mall is actually a "helper" dressed like Santa, who reports back to the big man. Paranormal author Jeff Belanger even interviewed Santa and got more details about his history than you could pry out of a particularly private celebrity.

We have made Santa Claus real, but that was done over the course of multiple generations. Meanwhile, Slender Man is getting there in just a few years on a high-speed connection.

Even if your older relatives have never visited sites like 4chan, CreepyPasta, the Reddit thread dedicated to him, or watched/played the Marble Hornets augmented reality game revolving around his legend, you can bet they are going to start asking about Slender Man. He might even become a topic in Washington, D.C. As politicians are wont to do, he may be further invoked as a need for online regulation or some such legislation.

Although I question how much the Las Vegas shooter was involved in Slender Man mythology, it is as necessary to look into with him as it is with the stabbings. But I don't think a fictional creature can force people to head down a violent path. I would rather discuss that under the topic of mental illness and how we're addressing it before blaming a demonic thoughtform.

Still, Slender Man is real. He may not be a physical being, but what began as a creepy story told on the Internet has made the leap into our cultural conversation. Sadly, that makes him real enough.