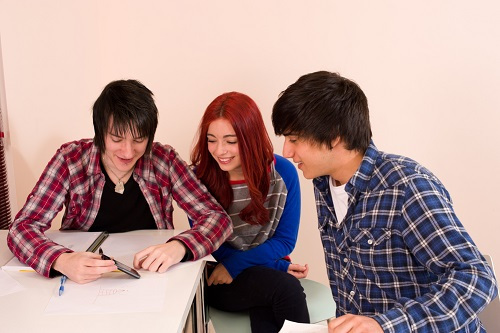 Anyone with kids knows that trying to limit electronics use is harder than cracking the DaVinci Code. So it's surprising that many parents don't wait as long as possible before springing for an iPhone. The awakening is rude and swift. They learn that smartphones are the devil. Their worst nightmare. All efforts to reach their plugged in offspring become exhausting and stressful. Some don't see their kids for days on end. But fear not, dear parents. There is a bright side. Removing the phone from the child's possession is an effective disciplinary tool. When taking this Draconian measure, blood curdling screams can be heard 'round the world. The behavior is changed. (At least for a while.)

As they say, all good things must come to an end. Some teachers are embracing smartphones for class work, so taking them away may not be an option for some parents. In a recent feature article in The Wall Street Journal, it was reported that kids at Southeast Raleigh Magnet High School in N.C., are allowed to use their gadgets for homework and quizzes. Other states jumping on the bandwagon, include North Carolina, Pennsylvania, New York and California. As a result of this emerging trend, kids will become even more dependent on their smartphones. And this is not a good thing. It is well documented that overuse of electronics is detrimental, especially for children. Even Steve Jobs didn't let his kids use an iPad. Chris Anderson, former editor of Wired also had strict rules on electronics use at home. When asked why, he said, "because we have seen the dangers of technology firsthand. I've seen it in myself, and I don't want to see that happen to my kids."

The Learning Habit, published in 2014, reveals that grades, sleep, social skills and emotional balance begin to decline after just 45 minutes of media use. A 2015 study by the London School of Economics found kids banned from using phones at school did much better on test scores than those who were allowed to use them. The impact of banning the devices was equal to an extra hour a week at school or a five-day increase in the school year.

At a time when adults are talking about balance, stress management and Internet overload, our children are increasingly hooked on technology. Classrooms should be a safe haven from distractions and a focused learning environment, but teachers are caving in to their students' desires. Comedian Paula Poundstone said it best. In reference to excessive smartphone usage, she said, "Some kids like heroin. Does that mean we're going to give it to them?"

Many people defend the use of smartphones in class. John Kim, a senior lecturer at the Harvard Business School, told the WSJ, "The teaching profession has yet to catch up with how students are using the devices."

Really? Apparently our underfunded, dedicated teachers don't have enough to do. Certainly the Internet is a superb research tool (except when the student looks up the per capita income of Uganda and gets sidetracked by Snapchat). But will writing a paper on a smartphone make the topic stick better? Why is technology driving the content of the learning? At what cost and to whose benefit? Something is wrong with this picture and a crusader in Boston is trying to do something about it, one school at a time.

Joni Siani is an outspoken and passionate advocate of media literacy education in schools and working with Media Literacy Now to pass legislation in all 50 states. She is also the author of Celling your Soul: No App for Life. (This book has been made into a movie by her students and was named best documentary at the Boston International Kids Film Festival.) Siani believes that using smartphones in the classroom is not only counterproductive, but downright "insane." Assignments done on a gadget is "homework in tiny chunks of thought with little reflection" says the author/filmmaker. She adds, "The objective of the learning is different from the technology itself."

Most importantly, encouraging more gadget use is not what many students want, according to Siani. And she should know. During the past seven years, Siani has interviewed thousands of kids and parents about the effects of digital communication. The response has been eye-opening. Young people are desperate for relief from the demands of 24/7 connectivity. After a recent screening of her documentary at a Boston area high school, a student asked Siani if she could just "vent" about the pressure from distractions. Last year, 25 students at another school sat with Siani for two hours after watching the film, waiting to be heard. Some of the kids were in tears. She says this happens after nearly every showing.

"Parents and kids look to their schools for leadership," says Siani. Therefore, it's important for superintendents, teachers and other educators to help kids unhook from their gadgets, instead of making them more dependent. Right now, policies vary about smartphone usage state by state, school by school, teacher by teacher. Consistent, digital communications policies in classrooms are needed that benefit the children. Not Samsung, not Apple or Verizon or Sprint, or the many other companies that provide the technology.

Steve Jobs must be rolling over in his grave.

More:
applesmartphonesSteve JobsEducationPaula Poundstone
Newsletter Sign Up
Raise the kind of person you'd like to know
Subscribe to our parenting newsletter.
Successfully Subscribed!
Realness delivered to your inbox