In his 2013 State of the Union address, President Obama affirmed his commitment to tackle the issue of climate change, "If Congress won't act soon to protect future generations, I will." He further stated, "I will direct my Cabinet to come up with executive actions we can take, now and in the future, to reduce pollution, prepare our communities for the consequences of climate change, and speed the transition to more sustainable sources of energy."

Our nation is facing so many other pressing issues -- an anemic economy, immigration reform, gun violence, and more -- so, what's the big rush with climate change? Climate change can wait... can't it?

No! It can't wait! And Obama gets it.

Failure to immediately tackle the economy, immigration, or gun violence will not spell cataclysmic doom for society. However, failure to address climate change now, during Obama's remaining term in office, could lead to an irreversible global catastrophe for the next generation and beyond.

In his address, Obama stated, "Now is the time to reach a level of research and development not seen since the height of the Space Race." It is informative to step back to that period of time, a little over half a century ago, in order to fully understand the "rush" to action on climate change.

On Oct. 4, 1957, the former Soviet Union launched Sputnik, the world's first satellite, into space with profound psychological impact. The late 1950s was the height of the "Cold War" and the nuclear arms race. That tiny, silver sphere -- Sputnik -- opened space as the new battleground of the cold war.

At the time Sputnik was launched, a young post-doctoral student named Dave Keeling started collecting high accuracy measurements of the greenhouse gas carbon dioxide in our atmosphere. Keeling's project and Sputnik were both linked to the 1957-58 International Geophysical Year (IGY). The data Keeling began collecting in 1958 during IGY now endures as the longest continuous instrumental record of atmospheric data ever collected. This record shows that the carbon dioxide concentration in our atmosphere has increased from 313 ppm in 1958 to 396 ppm today. That's an increase of more than 25 percent since the launch of Sputnik.

The U.S. was so stunned by Sputnik and subsequent Soviet success in space that President John F. Kennedy challenged our nation to "commit itself to achieving the goal, before this decade is out, of landing a man on the Moon and returning him back safely to the earth." We accomplished that goal on July 20, 1969 when Neil Armstrong stepped from the landing module Eagle onto the Moon's surface, "that's one small step for man, one giant leap for mankind".

Of lesser note in 1969, Dave Keeling spoke to the American Philosophical Society about the carbon dioxide data he was collecting. Keeling cautioned his tiny audience, "if the rise in carbon dioxide continues, it is likely to inhibit the escape of heat radiating upward from the Earth's surface and bring about a warmer climate -- the so-called 'greenhouse effect'."

Although scientists recognized that global carbon dioxide concentration was rising, it stood at only 324 ppm in 1969. A warmer world was "likely", but there was not a sense of urgency. We wouldn't approach a crisis for perhaps a century or more. In turn, policy makers left future generations deal with it.

Scientists continued to document rising greenhouse gas concentrations throughout the 1970s and '80s as well as the increasing temperature of our planet. Concern grew and became so great that 150 nations signed the United Nations Framework Convention on Climate Change (UNFCCC) at the 1992 "Earth Summit" in Rio de Janeiro. The ultimate aim of the Convention is "preventing dangerous human interference with the climate system."

Although President George H. W. Bush signed the 1992 UNFCCC treaty, five presidential terms later, we are no closer to curbing our GHG emissions. Most of the college students I teach today were not even born at the time Bush signed the pledge.

Obama understands that the window for delay is now gone. He has chosen "to believe in the overwhelming judgment of science -- and act before it's too late."

Robust scientific evidence documents that we must address climate change now, during Obama's remaining term in office. Our planet is warming at a rate that is nearly proportional to the excess carbon dioxide humans are dumping into our atmosphere. We have now warmed approximately +0.8 deg Celsius above the pre-industrial era. An increase of +1.5 degrees Celsius projects significant adverse impacts; small island states disappear beneath rising seas, most of the world's corals will die, glaciers retreat and more. It gets much worse at higher temperatures: +2 deg Celsius the Amazon turns into desert and the Greenland ice sheet melts; +3 degrees Celsius global warming may run out of control and efforts to mitigate may be in vain; +4 degrees Celsius we enter an extreme danger zone.

A recent report in Science states that the door to preventing a +1.5 degree Celsius world by 2035 may have already closed based on economic models that estimate a maximum feasible rate of emissions reduction may not exceed approximately 5 percent per year. The International Energy Agency (IEA) further warns that "without further action, by 2017 all earbon dioxide emissions permitted in the 450 Scenario will be "locked-in" by existing power plants, factories, buildings, etc." 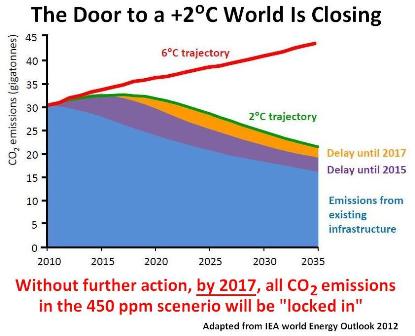 Simply stated, there is no time left. All evidence supports Obama's initiative, "for the sake of our children and our future, we must do more to combat climate change."