If you thought breaking into the energy drink market was tough (see Frava), at least it doesn't have the regulatory hurdles placed on alcohol. Steffan Bankier and Jordan Gutman co-founded Public House, a premium boxed wine company, back in 2012 and it's been an exhilarating challenge ever since. Read on to learn how they dealt with the barriers to entry, humbling sales calls, alternative packaging, and "The Godfather." 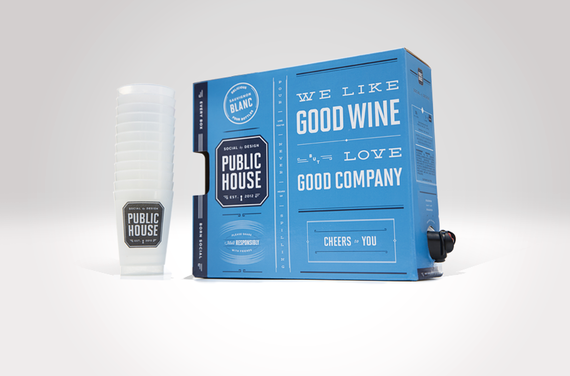 A: What were you working on before founding Public House? How did it prepare you?

Steffan Bankier: My background is in advertising, specifically on large alcohol brands. While it was very interesting, I was always looking for a way to work for myself. So, when I saw an opportunity, I jumped.

Jordan Gutman: I was working at tech startups and got my start at Yelp, which was an invaluable experience. I learned how to sell and developed some thick skin for facing challenges and rejections, which is important.

S: Getting told off to your face is an important learning experience.

A: What were some other important learning experiences?

S: One of the biggest hurdles was finding a wine producer. [The company] had to have the capabilities to fill a large quantity of boxes, and be within close proximity to New York. We vetted a lot of places in that first year.

J: Navigating alcohol regulations was also a pretty significant challenge. It was a steep learning curve. Every time you create a label it has to be government approved. Facts, size, design...all of it has to be approved. Then they send you changes, you tweak it, and resubmit. We can't sell directly to retailers either. That's a distributor's job.

A: How did you decide on boxed wine?

J: We did a lot of market research online and in-person. There's a lot of research that shows how--and how much--people drink wine in their twenties and thirties.

S: We're not anti-bottle, but bottles are outdated for many occasions. They're heavy, difficult to transport, they're fragile, and they spoil quickly. Our box keeps the wine fresh for a month after opening. It contains 4 liters of wine, 10 plastic cups, and still weighs about the same as a single bottle.

Ours is "the box for social gathering." We're trying to create a wine drinking culture that's more relaxed, and free of pretension. Believe it or not, 20% of European wine is boxed (compared to the U.S.'s 4%). In Australia it's 50%.

A: Tell me about the process of getting your wine into stores?

S: A year and a half ago, we went to retailers around NYC, and talked with the owners. Around 30% either sold or were open to selling boxed wine. Now we've opened accounts with most of them. Not only are they willing to sell boxes, but they'll carry multiple brands. That's in less than two years!

A: How did you choose Sauvignon Blanc (white) and Cabernet Sauvignon (red)?

S: After conducting several focus groups, we found that most people our age prefer these varietals. We're also personal fans of these wines.

A: What kind of promotions are you working on?

J: We recently launched a 3-month fundraiser that's donating money for up-and-coming artists to create street art in NYC. Like our wine, we think art should be something that's pretension free...so we're using our events to raise money for a cause we care about.

A: Plans for the future?

J: We've been discussing a lot of different ideas, but we're not sure how relevant they'll be in two years when we're ready. But we're definitely going to stick to alternative packaging.

The Christmas Department (An Illustrated Folktale)
by Alex Schattner