Last night, Bachelorette Emily Maynard's sparkle-filled journey to true love -- and a new daddy for Little Ricki -- came to an "awww"-worthy end during what Chris Harrison referred to ad nauseum as the "emotional fin-ahh-le." In case you missed the "most anticipated television event of the summer," which you couldn't possibly have done, here's the play-by-play.

We begin with some well-timed shots of Emily staring pensively out into a random body of water on a random bridge. Oh Curacao, we missed you since last week. Em still needs to pick a hubby/step-dad and the choice is TOUGH. After all, she's deciding between a life of skinny ties and skinny jeans and a life of Indy races. Also, we witness the triumphant return of Little Ricki -- and the arrival of Em's parental units.

CAN SKINNY JEANS IMPRESS THE FAMILY?
Jef shows up at Em's family's Curacao abode with a respectable bouquet of flowers in a white t-shirt (c'mon Jef, we know you could have done better), but still minus the last letter of his first name. Em introduces him to her parents, her brother Ernie and his fiancee, but I'm distracted by Em's eye makeup, her dad's sherbet shirt and her mom's at-least-one-pack-a-day voice. (Note: Don't wear purple eyeshadow the exact same shade as your purple dress. It's too much.) Jef manages to charm Em's family despite his terrible case of "like"-itis, and declares himself "completely smitten." He even asks Em's dad for her hand in marriage, because he's a gentleman and stuff. "There's nothing standing in the way of our love," Jef declares to Emily. (Except of course, that other dude...) But they choose to ignore that reality and make out instead.

DRIED FLOWERS ARE FOREVER
Arie arrives to meet the parents/bro somewhat more appropriately dressed than Jef. However, since Jef was such a smash success, he has a lot to live up to. At first he awkwardly rambles on about fishing and Croatia, but finally pulls it together and gives Em's parents a pretty wooden box filled with all of the roses that Em gave him during the previous weeks. This wins Em's mom over because Arie gave away something "precious." Because nothing says "precious" like dead flowers. By the end of the visit, Arie has also procured dad's blessing to propose to Em, and everyone's just super confused. This doesn't stop Em and Arie from having an intense parting make-out sesh, though.

Em hopes her family will tell her who to pick but, predictably, they just love both guys so so much and are just as confused as she is! Her mom does suggest waiting on an engagement for Ricki's sake though. (No engagement?! That's like "Bachelorette" blasphemy! Who wouldn't want to get engaged to someone they met 10 whole weeks ago?) 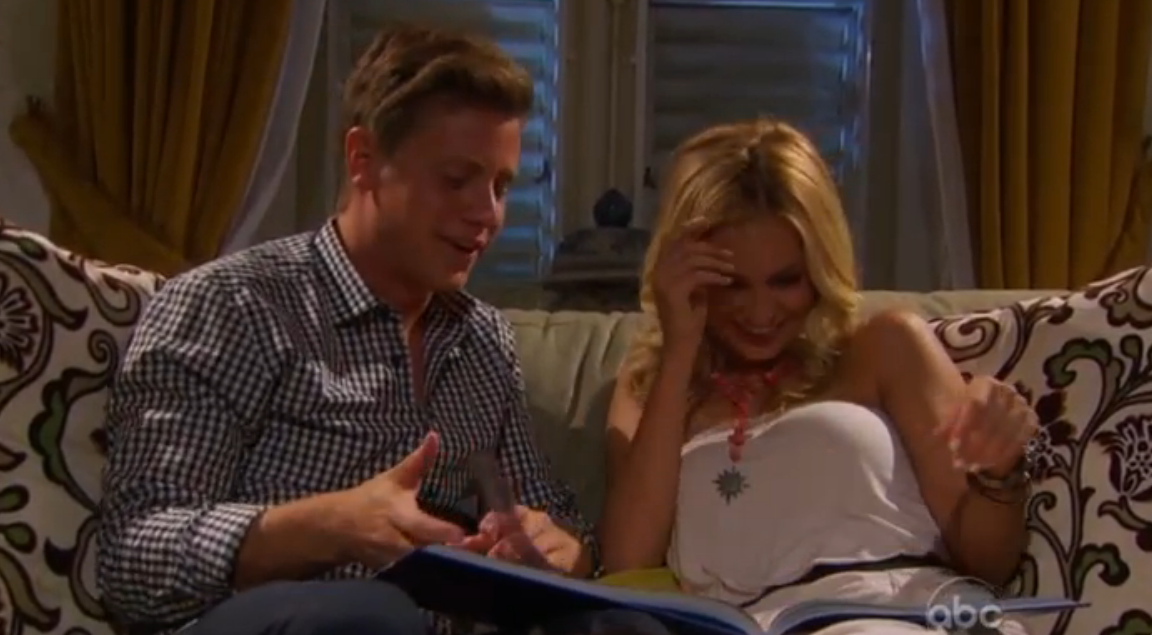 SWIMMING WITH A CHILD TOTALLY MAKES YOU A DAD
Em is super nervous about the idea of introducing Ricki to either of the guys. But in the meantime, off she goes on her last date with Jef! (We know it's a Jef date because he uses his signature "You look amazing!" line.) The pair have a heart-to-heart on a remote beach, where Jef expresses his dismay at not getting to hang with Little Ricki. It gets slightly awkward when Em brings up Brad, but she finally realizes that it might not be a bad idea to let her potential fiancee meet her daughter before she suddenly gets a new daddy.

Jef and Em creepily stare at Little Ricki through the blinds as she splashes around in the pool. "There she is!" says Em, to make sure Jef doesn't confuse her daughter with the bridge. When they finally go meet Rick-Rick, it all goes swimmingly (terrible pun intended). Jef charms the little one by putting on pink goggles, playing with a Cheeto-covered stuffed monkey and making her giggle a whole lot. As much as I'd like to just make fun of the whole thing, it's actually pretty cute. And Em's right: Little Ricki is "super chill."

Over dinner -- a.k.a. untouched white wine and dessert -- Em and Jef reminisce about their "journey" and chat about how great Ricki is. Then they kiss a lot while simultaneously thanking each other over and over. Jef presents Em with a book about Curacao (that Tourism board is really getting its money's worth) in which he has drawn stick figures on top of various photos. Plus he wants to hold her hand til he's, "like 110." THIS is true love, people.

CHRIS HARRISON IS SO WISE
"That day in Curacao, Emily was looking for some answers. And she got some help," says Chris Harrison. Who could that "help" possibly be from? Him of course! Oh Chris, always there to lend a helping decision-making hand. They talk it out and Em reveals that her Ricki-Jef introduction made her certain that she wants to be with Jef at the end, and she feels guilty even going on another date with Arie. Everyone watching gets super confused because this BIG REVEAL isn't supposed to happen for another 45 minutes. Em, you're being a decent person and all by not dragging it out -- but this is reality TV! Where's the drama? We all subsequently brace ourselves for a painful 30-minute breakup as Emily stares at water and feels bad for Arie.

LOVE POTION FAIL
In an attempt to make things as awkward as possible, Arie shows up to his finale date with Em early. And to pass the time, he makes a love potion with a woman named Dinah who is apparently a love potion expert. Arie says things to the camera like, "Tomorrow I'm getting engaged." Oof. Way to rub it in, producers. When Em finally gets there, she tells Arie he did a "great job" making the potion, but she'd like to sit down and talk. As they park themselves on the floral-printed bench, Em immediately starts bawling. Arie tries to comfort her until he realizes he's being rejected. She apologizes while he looks away at the trees and grabs his chin. He remains classy and tells her it's OK, but finally as she continues to weep, he gets up and walks away to the Escalade. "I don't think you're gonna get the goodbye you want," he tells Em. Somehow Arie is even better-looking when he gets angry/tears up.

After Arie's car drives off into the tropical distance, Em stares dejectedly at a muddy pond for 30 seconds. (On "The Bachelorette," water=deep thinking.) Back at the studio, the live audience seems to have taken the breakup worse than Arie. Or else they've really practiced their "look somber" faces.

NEIL LANE + A PLATFORM IN CURACAO = DREAM ENGAGEMENT
The next morning, Em and Ricki have mother-daughter journal time, and Em feels better about everything. Meanwhile, Jef dresses up to meet with engagement ring purveyor Neil Lane and pick out an enormous ABC-bankrolled rock. He must know Emily pretty well because the ring he chooses is so sparkly it's almost blinding.

Then it's proposal time. But instead of a sweeping mountain vista one can only get to by helicopter, Em's big moment is set on a platform in a Curacao alley. Fortunately, Chris Harrison's invisible minions set up a bunch of flowers in clay pots the same color as Em's straight-out-of-Bollywood dress, so it's all good. Once Jef, wearing his best skinny tie, arrives on the platform, Em cuts to the chase and tells him that he's the last man standing. Jef tells her that he thinks it's "incredibly meant to be" and that he's "found [his] everything." I simultaneously gag and swoon. Jef finally gets down on his knee and presents the big sparkly ring. Em pauses for 10 seconds for dramatic effect, but obviously says yes. Then we're treated to a montage of Em and Jef's whole journey ... set to the "Karate Kid 2" theme song. Finally, Emily, Jef and Little Ricki are together, and they walk hand-in-hand into the Curacao sunset. 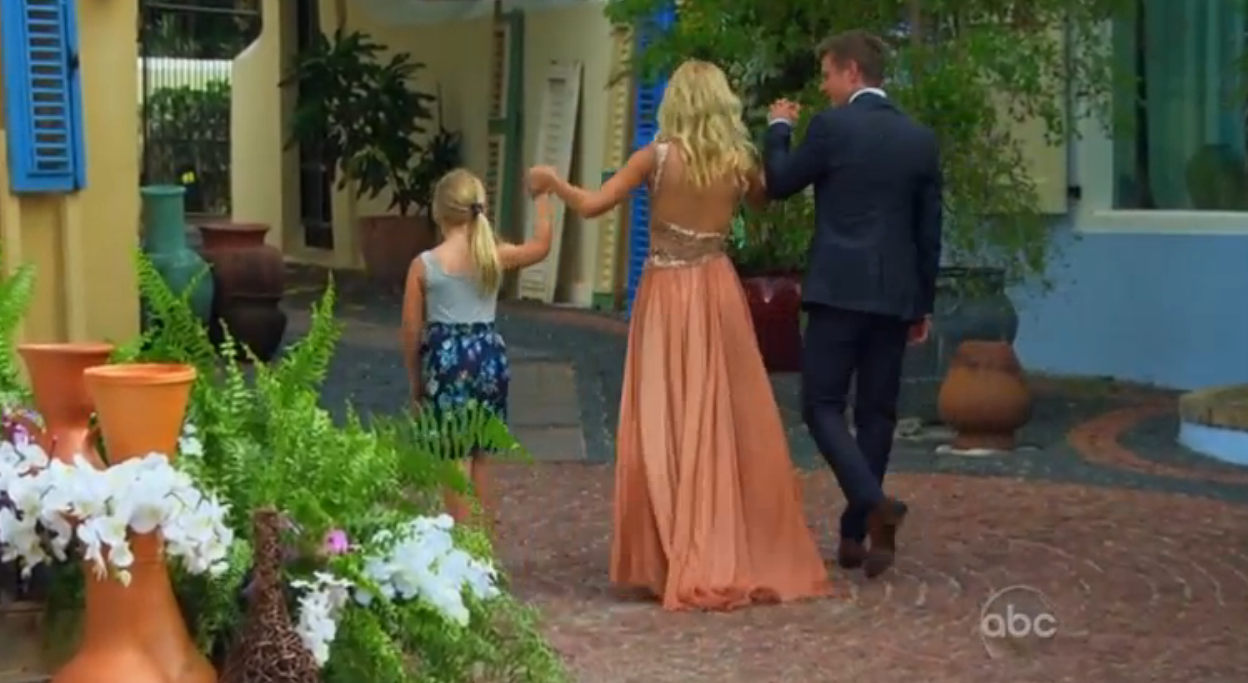 AFTER THE FINAL ROSE
Chris tries to get us all excited by saying there are "shocking secrets" coming up. Having watched "After The Final Rose," I'm still unsure what these "shocking" tidbits were. First Em comes out sans Little Ricki, but sporting some intense hair extensions. She shows off her engagement ring and tells Chris that she would've been just as happy with tape around her finger. (#Lies)

Then Arie comes out, and he and Emily smooth things over once and for all. He reveals that after the show he flew to Charlotte and left Em his journal ... which Emily never read. To show that she totally respects his privacy, she gives it back to him on live television. We also learn that Jef and Arie are still BFFs. Arie's genuinely happy for the engaged couple, and begins to rival Sean as a potential next Bachelor.

AND THEY LIVED HAPPILY EVER AFTER ... IN CHARLOTTE
Afterward, we move on to "the good news," as Chris Harrison says. (Also known as One-F Jef.) He and Emily are all moony over one another, and apparently they've been hanging out in secret locations over the last couple of months. (Hopefully they made up for their previous lack of fantasy suite time.) Now that the news is public, Jef just wants to kiss Emily on TV to make up for lost time, and take her on a humanitarian trip to Africa (insert plug for his water company here). When they return from their trip, Jef is going to move to Charlotte -- and live separately from Em and Ricki -- while they plan their wedding. Let's be real: Emily was never really trying to move to Utah.

So that wraps up Emily and Jef's 11-week journey to find true love. And as my friend Vicki puts it: "They're f**king Barbie and Hipster Ken." It's been real. Until next time, just remember: True love is out there. All it takes is 25 guys, 11 weeks, 3 fantasy suites, 2 parents doing "charity work," 1 seven-year-old and a hipster former Mormon who thinks you "look amazing."

LOOK: The Best Tweets About "The Bachelorette" Finale