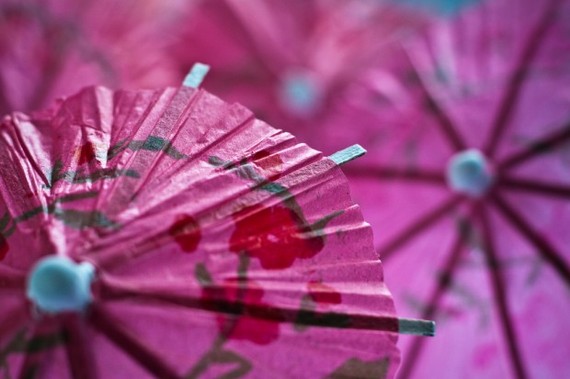 A classic tiki cocktail is a thing of beauty: Syrupy sweet with plenty of rum and enough fruit to almost classify it as healthy. (Hey, we said almost.) But perhaps the best part of all is the presentation: a giant coconut (bonus points if it's real), a snazzy swizzle stick (if you're lucky), and, of course, a cocktail umbrella. We love this little parasol so much that we wanted to learn more about it: Where did it come from? Does it actually serve a purpose? Why do we all love it so?

Our search led us to two of the first known tiki bars, both opened in 1934: Don the Beachcomber, in Hollywood, and Trader Vic's, which set up shop in San Francisco.

Ernest Raymond Beaumont Gantt, the owner of Don's, traveled the world as a youth, then worked as a bootlegger throughout Prohibition; he then brought his two passions--exotic locales and booze--together in his now legendary bar. Why the tiki theme? He is quoted as having said, once, "If you can't get to paradise, I'll bring it to you." That's not to say Gantt's expression of paradise was entirely authentic to Polynesian culture: His crafted cocktails may have been tasty and unique, but they were completely original, and all based on rum--a spirit which was cheap and easy to come by in the post-Prohibition era.

Vic Bergeron, a bartender who lived in Cuba and Hawaii to learn about tropical cocktails, then transformed his original bar, called Hinky Dinks, into a tiki-themed paradise. Trader Vic's is now a franchise restaurant and bar that serves up classic cocktails, including the mai tai--which Vic has been credited with creating.

This is all fascinating stuff, but why top the drinks with an umbrella, specifically? Why not, say, a miniature lei or a tiny faux-bottle of sunscreen? This is where things get a little murkier. Some speculate that the cocktail umbrella was a marketing ploy to lure women to the bars--after all, what lady can resist a darling paper parasol in her mai tai?

Is it possible the tiki umbrella could serve a more practical purpose? Could those little parasols could keep your icy drink from melting in hot weather? On the more serious side of things, could the alcohol evaporate out of the drink if it's not shaded from the sizzling heat of the sun?

Peter Vollhardt, a professor of chemistry at the University of California-Berkeley, offered a more logical explanation: "Once the ice is melted, the [temperature] will rise above 0 degrees Celsius and the alcohol vapor pressure will increase. However, this is all immaterial since nobody waits that long to finish a cocktail." Daniel Weix, an organic chemistry professor at the University of Rochester, explains further: "[Evaporation] will not be faster in direct sunlight vs. darkness if the temperature is the same. My verdict--the alcoholic content of your drink is not in danger regardless of umbrella-ness."

So there's the science. Aduni Lemieux, the general manager of The Rusty Knot in Manhattan and a tiki bar veteran herself--she started working at Ciral's Tiki House in Chicago back in the '60s--had a different theory. "This may be purely speculation," she says, "but I wonder if the soldiers who were stationed in the South Pacific had anything to do with it. That was Ciral's goal, anyway--he served, and wanted to bring some of that back home to Chicago. That's why he opened a tiki bar."

At Otto's Shrunken Head, a self-described "divey tiki bar" in Manhattan, not only do classic drinks get an umbrella, they also come adorned with a seahorse stirrer, firecracker straw, and a plastic monkey whose tail curls gracefully around the glass. Nell Mellon, co-owner of the bar, purchases all of those accoutrements from Dynasty, a wholesale distributer based out of Woodside, N.Y.

Lo and behold, the brand logo for Dynasty prominently features that iconic umbrella! Co-owner Lillian Wong explains that it was the first thing Dynasty imported when the company was starting out in 1988. Wong's father used to own Polynesian-themed restaurants in Massachusetts, so the tiki theme runs deep. From there, Wong and her husband, Eric, began importing party favors, cocktail stirrers and picks as supplemental income when they were younger; soon the company grew, eventually importing, according to Dynasty's website, "everything that a good Asian restaurant could ask for." So, who actually manufactures those little umbrellas?

SEE MORE: 22 Recipes Everyone Should Know How to Cook

After all this history and folklore, who was the first person to actually put an umbrella in a cocktail? Jeff Berry, tiki drink historian and author of six books on the subject, has the answer: "A bartender named Harry Yee at the Hilton Waikiki was the first. He used to garnish his cocktails with a stick of sugarcane, but that was at the time that everybody was still smoking cigarettes. After they chewed on the sugarcane, they'd set it in the ashtrays, and he would have to scrub them clean. So he came up with something new."

Yee first used an orchid in his garnishes, but the umbrella is what really took off: "People really do call tiki cocktails 'umbrella drinks' now," says Berry. The first cocktail to get an umbrella was the tapa punch, in 1959, according to an article written by journalist Rick Carroll in 1998. So why were those little umbrellas hanging around? Berry surmises they were used as toothpicks and garnishes for food--or, possibly, "people put them in their hats!"

(Oh wait! We only just realized that Yee, who was born in 1920, is still alive! We've reached out to him for comment, and will update this story when we hear back.)

After decades of kitsch, does anyone actually like those little umbrellas? "Well," says the Rusty Knot's Lemieux, "ours are purely decorative, and they only come in traditional tiki drinks, like a colada. And people ask for them! There's always a sweet young lady who's upset that her drink didn't come with the topper. I tell her, 'Honey, a vodka tonic doesn't traditionally include an umbrella.'"

Hey! Wouldn't you like to check out some of the wackiest cocktail toppers?