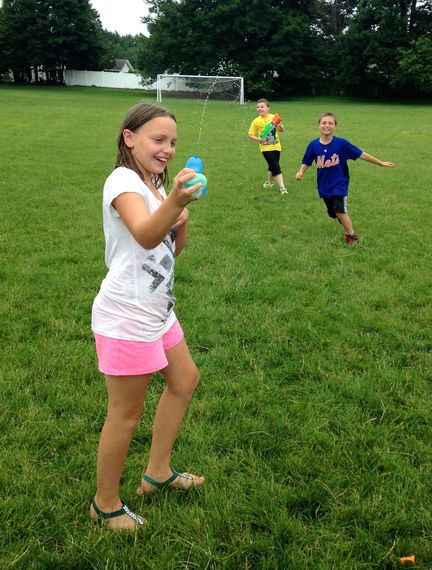 Around here, Mom gets a bum rap. Dad is the fun one, doing all the tickling and wrestling and ball-throwing in the house. I'm that shadow in the background sweeping up the shards of the vase they just knocked over.

I even call my husband 'Daddy Funtime,' sneering as I say this to fully articulate that this is meant to be a negative connotation.

"It's no fair," I whine. "Day in and day out, I'm the one making the meals, playdates, appointments, and doing all the heavy lifting to make sure our children have a happy life. Then YOU swoop in with your stupid jokes and your piggyback rides and get to play with them while I slave behind the scenes. Effin' Daddy Funtime."

He returns the compliment by calling me The Drill Sergeant.

This used to put me on the defensive. I'd get like Jack Nicholson in A Few Good Men, telling him how we use words like please and thank you and that I have a greater responsibility than he can possibly fathom. "You need me on that wall," I'd remind him. "And I have neither the time nor the inclination to explain myself to a man who wrestles and tickles under the blanket of the very freedom that I provide."

But last week, as I was once again 'asking' the kids to clean up dinner, put away shoes away and straighten up rooms, my funner half turned to me and said, "This is what they will remember about you. Barking orders."

Ouch. Was that true? Would Drill Sergeant Mom be their only takeaway? If so, that totally sucks.

Because it's not like I don't do fun things with and for my kids too. I surprise them with trips and treats, take them to movies, playgrounds and theme parks, sing along with them in the car. Heck, just the other day I stayed up late creating a birthday scavenger hunt that my oldest son was beyond thrilled to wake up to.

But, apparently all the mothering duties I do 24/7 overshadow those special moments and I have to remind them. Fun happens around here, people! I'm just as fun as the next mom. Or am I?

A few days ago, a younger mom I know told me what she was planning for the last day of school. After the bell rang and everyone was sprung from their cages, she would be waiting to bombard them: silly string for the fifth graders, water balloons for the younger kids.

"Wow," I said. "That sounds like so much fun." But inside, I was also marveling at this mom of five's sheer energy. Forget all the prep work that would be needed to fill and tie those water balloons and to pull off the element of surprise. It just seemed so, I don't know. Above and beyond. Lately, we have been running so hard I struggle to even think up what's for dinner.

I discussed this with another friend. "I'd love to think of fun things like that," I confided. "But I do so much already, those extra magic moments aren't even on my radar any more."

"I'm just not that kind of mom," my friend agreed. Cutting sandwiches into stars and hearts, sleeping in forts in the basement, declaring a 'Yes' day, and all those other cuhrazy ideas that make me hate Pinterest for giving me an inferiority complex. Sometimes being the fun mom sounds like one more chore in an already impossible list.

Instead, I planned to mark my third graders' last day of school by getting there on time to pick them up. And maybe, if they were weighed down with school supplies and goody bags, I'd even offer to help carry their stuff.

Then that younger mom, the fun one, sent me a text. "MEET US AT THE FIELD ON THE SIDE OF THE SCHOOL. BRING WATER GUNS."

Hmmm, water guns. And a jug of water to refill them. I could do that. Much much easier than tying off a hundred water balloons. Why not?

When the bell rang and the twins heaved all their bags and books at me, I lied and told them my car was parked in a different lot. We made our way over to that field where my supplies and a dozen other kids were waiting. Then a few other moms and I let loose, water bombing and soaking those suckers for all they were worth. It was every bit as fun as it sounds. And all it took was a shift in my attitude. 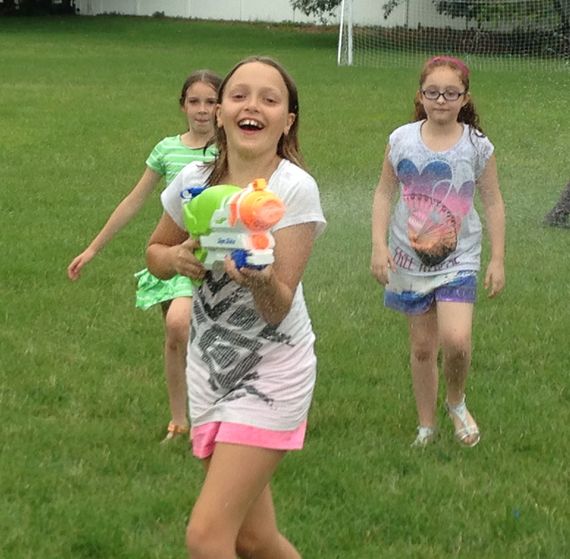 Now that summer break has started off with a bang, I wonder if I can keep the fun going. I still have work and chores, plus the extra stress of trying to keep the kids from bludgeoning each other to death whenever they're not occupied. Every day can't be a picnic, but maybe they don't have to be. I've been taking this mothering job of mine waaay too seriously, which, honestly, is RIDICULOUS because it's not like they can fire me. I've been trying to resign for a while now, but without any luck. So it's high time for this Drill Sergeant to lighten up.

Maybe by bringing back a little more spontaneity, smiles, heck--even some laughter--the kids will start to think of me as Mommy Funtime. Half of perception is in the marketing.

And if the house goes to hell or we have to have ice cream for dinner, who cares? Not my kids. Not my husband. Domestic duties make me miserable anyway. I just need to get one of those signs I've seen on Pinterest:

"PLEASE EXCUSE THE MESS. MY KIDS AND I ARE BUSY MAKING MEMORIES."

Way more fun than the vacuum I got for Mother's Day.

Read more from Michelle Sassa at thefemininemystake.com and in her debut novel, Copygirl, hailed as Mad Men meets The Devil Wears Prada.

More:
Parentsparenting humorMommy Warssummer fun
Newsletter Sign Up
Raise the kind of person you'd like to know
Subscribe to our parenting newsletter.
Successfully Subscribed!
Realness delivered to your inbox