There's a battle royale raging in Chicago. It pits hedge funds, the Chicago financial exchanges, real estate interests and Mayor Rahm Emanuel on the one side, against public employee unions and community groups on the other.

At issue is whether public employee pension benefits should be slashed. Mayor Emanuel claims that "If we make no reforms at all across our pension funds, we would have to raise City property taxes by 150%.... Businesses and families would flee, not just from our city but from our state." By 2017, He argues that the city will have to pay $2.4 billion a year into the pension fund.

The public employee unions and community activists contend that city's fiscal problems could be solved easily through a small sales tax on financial trades on the Chicago Mercantile Exchange and the Chicago Board Options Exchange.

The outcome may determine the health and well being of pension funds as well as public services all across the country.

When Rahm Emanuel worked as a presidential assistant in the Clinton administration, he earned $118,000 a year. After he left his White House job in 1998, he got a raise, making over $18 million in the next two and a half years working for the "boutique" investment banking firm of Wasserstein Perella. Emanuel had no previous banking experience.

Ken Griffin, the CEO of the Chicago-based Citadel hedge fund and "his wife Anne Dias Griffin, donated more than $200,000 to Mayor Emanuel's campaign for Mayor in 2011," report David Sirota and Ben Joravsky in Pandodaily. "Griffin describes the mayor as his 'good friend'. Other Citadel employees have donated about $178,000 to Emanuel's campaign."

The 45-year-old Griffin's income for 2013 was $900 million (or about $492,632 an hour.) Apparently a good deal of his income comes from high frequency trading (see my summary) that runs through the two Chicago financial exchanges. "His Citadel LLC returned more than 300 percent in a fund started as a high-frequency strategy," according to Bloomberg News.

Griffin, alone, could fund all of Chicago's pension liabilities for the current year (estimated at $692 million) and still have $208 million left to scrap by on. Yet Griffin is terribly worried that the mayor is being too soft on retirees. He "castigated Chicago and Illinois politicians for not making "tough choices," blaming Democrats who control city, county and state government for not fixing pension, education and crime problems," reports Crain's.

"On March 5," report Sirota and Joravsky, "Chicago's city council overwhelmingly voted to approve Mayor Rahm Emanuel's proposal to divert $55 million of taxpayer resources into a new privately run hotel in the city's south loop." The Marriot was selected to run "one of America's largest hotels next to America's largest convention center -- and doing so with massive taxpayer subsidies, but without having to pay to construct the hotel and without having to pay property taxes."

As luck would have it, Griffin is likely to make a great deal of money on this deal: "In the months before the development deal was announced, Griffin's hedge fund was buying up large blocs of Marriott stock." What a coincidence!

Why are a millionaire mayor and a billionaire hedge fund CEO teaming up to attack public pensions?

Because that's where the money is, and lots of it. Mayors and governors want to reduce pension fund contributions so that they can continue to lavish tax breaks and subsidies on their corporate patrons and still balance their budgets. In Chicago, the yearly cost of those corporate tax subsidies is already higher than the yearly costs of Chicago's pension fund outlays, according to an analysis by Goods Jobs First.

Hedge funds and other financial firms join the attack, and perhaps instigate it in the first place, because they want the lucrative business of advising and investing all those pension dollars. In New Jersey, Governor Christie's administration awarded a $300 million pension management contract to a controversial hedge fund that also is major contributor to Christie's re-election campaign.

The amazing irony is that there would be no talk of a pension "crisis" at all where it not for the fact that Wall Street crashed the economy. The hedge funds that covet pension fund reform and pension fund contracts were full partners in the reckless gambling spree that took down the economy and destroyed 8 million jobs in a matter of months. As economist Dean Baker shows the pension shortfall is primarily the result of the 2007-08 crash in the financial markets. "If pension funds had earned returns just equal to the interest rate on 30-year Treasury bonds in the three years since 2007, their assets would be more than $850 billion greater than they are today."

The lesson learned should be this: If you use hedge funds to run your pension funds, you'll get fleeced come the next crisis.

Why are the financialists getting away it?

Rahm Emanuel, Chris Christie and hundreds of other politicians are able to attack public pension funds with impunity because defined benefit pensions in the private sector are an endangered species. One demagogic question is all they need to ask and they ask it again and again:

"Why should you pay taxes for public employee benefits that you don't have?"

As the chart below demonstrates less than 15 percent of private sector employees now have defined benefit pension programs, down from nearly 40 percent in 1979. Meanwhile, 401(k)s have grown from 16 percent to over 42 percent. This didn't happen by accident. 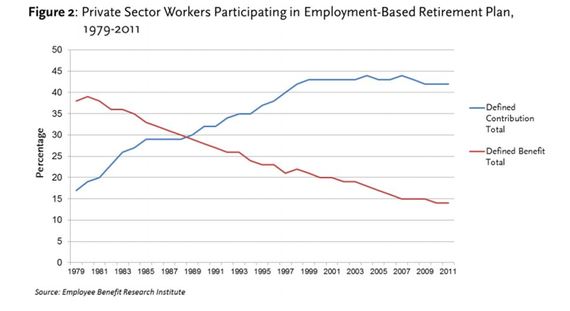 Defined pension funds are disappearing for two overlapping reasons. The first is that unions, the main driver of defined-benefit pensions, are in decline. Today, union's represent less than 7 percent of the private sector workforce, down from 35 percent in 1955. But that's only part of the story.

The most crucial causes is the deregulation of the financial sector which started in the late 1970s. Once freed from their New Deal shackles, corporate raiders (now called private equity firms, hedge funds and investment firms) strip-mined thousands of corporations using borrowed money. Those debts were (and still are) placed on the books of the target company and its cash flow is used to pay the interest on the debts as well as pay huge sums to the raiders, their investment advisors, their bankers, and the compliant top managers of the target company.

How does the target firm pay for all these new costs? The raiders, of course, claim that through their own entrepreneurial genius, they "unlock" hidden value. In reality, they milk the company in every way imaginable. They sell off product lines, shut down facilities, move work off-shore, slash r & d, and raid the pension fund, claiming it was "overfunded." Often the target company also tries to discontinue the pensions entirely or shift to 401(k)s forcing the employees to kick in most of the money. Many corporations become so loaded up with debt that they go into bankruptcy, through which they can further whittle away employee benefits and reduce or discontinue pensions. 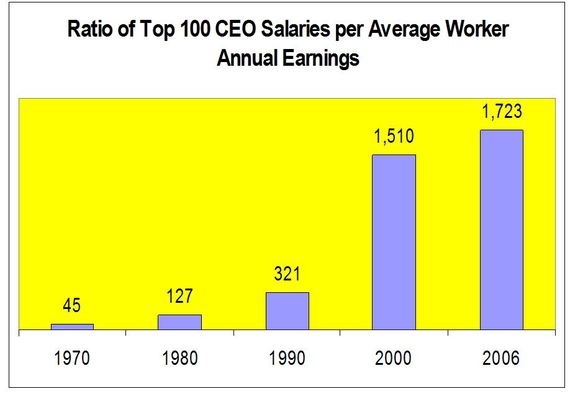 A Tax on financial strip mining?

The financial transaction tax (sometimes called a financial speculation tax or Robin Hood Tax) is designed to retrieve some of the money that is being siphoned away from our wages, benefits and tax dollars. Because the super-rich, their hedge funds and their corporations have a myriad of ways to avoid income taxes, especially by shifting money offshore, the financial transaction tax hits them where they live -- buying and selling financial assets on the markets, especially on the Chicago exchanges where derivatives and futures contracts are sold.

It is estimated that a minuscule tax on each trade would generate $12 billion a year for Illinois. (House Bill 5929 calls for "a rate of $1 per contract for all transactions for which the underlying asset is an agricultural product and $2 per contract for all other contracts.") That would be $9.6 billion more than $2.4 billion dollar pension shortfall Mayor Emanuel claims Chicago will face in 2017. That still leaves more than enough money to dramatically improve education and even make higher education tuition free in Illinois (thereby cutting into Wall Street's predatory student loan business.)

While such a tax could easily fulfill the promises made to public employees, it might also be prudent and just to use some of the financial tax to create a statewide defined benefit pension fund for private sector as well as public employees. That should put an end to the divide and conquer tactics that opportunistic politicians and their hedge fund cronies use to enrich themselves and their political ambitions.

Let's take heart from what Rahm Emanuel infamously said when serving as President Obama's chief of staff at the height of the financial crisis: "You never let a serious crisis go to waste. And what I mean by that it's an opportunity to do things you think you could not do before."

This blog originally appeared in Alternet.org

Les Leopold is the director of the Labor Institute in New York. His most recent book is How to Make a Million Dollars an Hour: Why Hedge Funds Get Away with Siphoning off America's Wealth (Wiley, 2013)