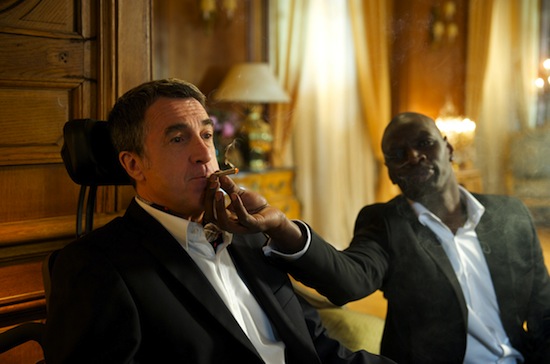 The real magic of the movies lies in the filmmakers' ability to transport their audiences to places they have never been and wish they could inhabit. Such is the case with the upcoming release of The Intouchables thanks to the film's auteurs, Eric Toledano and Olivier Nakache.

Nestled in the comfort of my front row seat at a screening last week, Toledano and Nakache made me believe. From the first scene of a stunning car chase through Paris at night, to the last (hint: stay for the credits) they made me believe that friendship is the most important thing in life, that a person can continue to thrive even after becoming a quadriplegic and that a dialogue between cultures -- even in a society that is currently extremely tense on immigration issues -- is possible.

But as humanly magical as their film is, the one thing thankfully missing from The Intouchables is what Spike Lee once called "the magical, mystical Negro", that secondary, stereotyped black character whose sole purpose in the story is to teach the white lead some wisdom or cure him of his sins. What Toledano and Nakache have done with their two leads Philippe and Driss -- sublimely played by François Cluzet and Omar Sy respectively -- is to create two whole characters, flawed and powerfully flesh and blood, who are clearly both important on their own but also to each other.

While in the real life story on which The Intouchables is based Driss is Abdel, a North African Arab with all the same virtues and weaknesses as Sy's character in the film, Toledano and Nakache made an artistic choice to transform him into a second generation West African. Mostly due to their unfaltering belief that only Omar Sy could play this complex, pragmatic, energetic man, it was a decision that was celebrated in France. There, the large immigrant African community hailed the film as one they had long waited for, finally and fairly showing their daily struggles and living conditions.

Sy went on to win a César for his role, the first black actor in history to win the prestigious French equivalent to the Oscars, cementing France's adoration with The Intouchables, and the film went on to conquer hearts across Europe. In Italy, where I first heard about it, it broke all kinds of box office records and created public discussions about immigration and the issues faced by hired caretakers and those in their care.

Here in the U.S., the film has thus far received a slightly different reception, as some American critics have described Driss' character as a "stereotype." I found him instead to be the total opposite, a refreshing change from the typical The-Green-Mile-slash-Forrest-Gump subordinate African American parts we are now subliminally accustomed to watching here. And don't even get me started on The Help...

I caught up with Toledano and Nakache in NYC and enjoyed an engrossing conversation with the filmmaking duo who are at once charming, hilarious and intense. They talked about their chemistry as a duo, what they envisioned before starting The Intouchables and the spark they felt which made them decide they needed to make this film. For those of us with a short attention span, you can catch my "Fast Culture: In 180 Seconds" video at the bottom of this piece.

You have such a successful relationship as filmmakers, what do you each bring to the table? 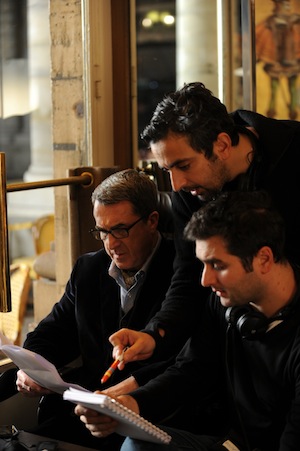 Eric: We are very different, like in the movie. Olivier has a special talent -- I prefer to speak about him. And he'll speak about me, if he wants... He knows how to capture people. Like if we are in a meeting, he can look at someone and capture one expression or something from that person. Not an imitator but he can take a sign, the comportment, the behavior that person has and he makes me laugh. He has a good sense of observation and he makes a beautiful coffee.

Olivier: Yes, especially in the morning!

And what does Eric bring to it?

Olivier: It's a chemistry between us, like you said...

Olivier: As you said, we write together, in front of each other, we talk a lot, we talk about scenes when we begin to write, we think about the scenes first. -- (Eric whispers something in French)

And he tells you what to do?

Olivier: Yes, he just said "tell her my qualities"...

So what are his qualities, in three words, describe Eric.

Olivier: He's good with the structure of the movie, when you write you have to think about the big picture. So three words would be anticipator, funny, rigorous.

Eric: impersonator, he doesn't like conflict, I don't know how to say it with an adjective, peaceful perhaps? And humorous. So humorous, peaceful and "capturateur" -- (translator chimes and translates it as "someone who can perceive what people are like and reproduce it").

Olivier: And gorgeous of course!

You were inspired by the true story portrayed in the documentary La Vie et la Mort but what was the spark that made you connect personally to the story? Eric: The spark was that in life you have some boxes from which you can't move: you're rich, you're white, you're disabled, you're from a poor neighborhood, you are black -- and all these boxes are so limiting, chocking. The spark was that in this story, there are two stars which are exploding, connecting, very extreme opposites and at the point of their meeting, everything is going to change, when they change the views they have on the other one. It's very easy for Philippe to think that because Driss comes from this kind of neighborhood you should not let him inside your home because it can be dangerous. We have a character in the movie who tells him "you have to be careful about this guy, they have no pity." It's very easy for us to think that this guy, when he's coming in, will do a bad job. Everything is easy but they go through it and think differently. That's a modern fairy tale. Olivier: I remember one thing, when we saw the documentary, there is a spark, a scene when Abdel in the morning lift him up in his arms from the bed, and carries Philippe so they are face to face, two men, one's head on the other's shoulder. That image was so strong.

Do you want to address the U.S. critiques about Driss being a "stereotype"?

Eric: We felt really hurt. There is a tone of comedy in our movie, which is subversive, it's not politically correct so I think people didn't understand this. We had to speak out [in a Huffington Post piece] and say, you have to open your mind and not watch the movie with a special American culture. To open your mind and see that we in Europe have different history, different social context, different waves of immigration. In our movie, the two characters are as equals, there is no hierarchy between them. They are pragmatic, they need each other. When we asked Philippe, why did you hire him, he said, "because I needed him. It was just a problem of need. I'm not Christian with good feelings just pragmatic." But later, as equals, they received something from the other, and this is the possibility which both opened their minds and a new friendship. An exceptional friendship.

Is there a scene you envision before you even start a film and what was it for The Intouchables?

Eric: We wrote the first scene before the script, before everything. The cops stop them, do we know that Philippe's disability is true, have they stolen something, are they drug dealers? We still don't know who they are...

Olivier: And the Opera scene too. And at the gallery, "no handy, no candy."

And the dance scene?

Eric: Yes, because it's a special emotion to have someone dance for another one... And the eyes of François, when he sees Driss dancing for him, it's a real emotion for me...