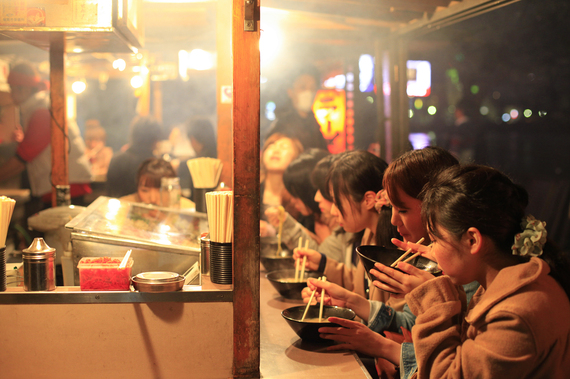 Asian food has become such an important component of the American diet that we often take it for granted. Staples like sushi, Thai curries, and Chinese dumplings belong to the everyday culinary vocabulary of many Americans. As we easily find them in restaurants, in the aisles of most supermarkets, and in corner stores, we seldom reflect on their origin or how they integrated themselves in the US foodways. Even less frequently, does the average consumer give any thought to the historical and political dynamics that are behind the success and the global acceptance of certain dishes.

Two books, both published in 2014, may be of interest to those who are curious about Asian cuisines beyond recipes and random trivia. Yong Chen, a professor history at the University of California, Irvine, has tackled the daunting task of charting the story of Chinese food in America. The title of his book, Chop Suey, USA, hints at the argument that unfolds in his research.

Chen argues that the Chinese succeeded in making their food successful because they took advantage of the transformation of the US into a consumer society - an "empire of consumption," in his words - with growing numbers of citizens enjoying a lifestyle where cooking is not a necessary daily chore any longer and food is abundant, ubiquitous, and cheap. At the same time, the Chinese adapted to the US racial politics of labor, working in service industries like mining and laundry first, and restaurants later. As a result, Chinese establishments often suffer from limited prestige in the hierarchy of the American hospitality industry to this day. Cheap dishes like chop suey, often invented for the clientele in the new country, became more important for Chinese businesses than the complex and refined dishes from many Chinese mainland cuisines, which are still vastly unknown to most foreigners. Nevertheless, over generations, Chinese immigrants managed to overcome marginalization, racism, and culinary conservatism by asserting their food traditions and turning them into a crucial element and marker of their cultural identity in America.

The impact of migrations and politics on Asian food history is also the main theme of The Untold History of Ramen. As the book subtitle suggests, NYU history professor George Solt unpacks "how political crisis in Japan spawned a global food craze." Solt follows the evolution of ramen from "a food associated with manual labor and night entertainment to an iconic component of Japanese national food culture," as well as its transformation into an international hit. Ramen started their path to glory as humble Shina soba (meaning "soba from China"), introduced to Japan by Chinese immigrants as early as the end of the nineteenth century and eaten by the lower classes. They then became Chuka soba during the American occupation after World War II, when hunger was a widespread phenomenon and ramen provided affordable calories.

In the following era of rapid economic development, young working bachelors chose them as a rapid and efficient meal. Later on, during the financial bubble of the 1980s, the unpretentious ramen were embraced as a symbol of Japanese matter-of-factness, to then become a mark of patriotism and pride in Japanese tradition in the 1990s, when globalized fast food was deeply penetrating Japan. Solt illustrates how nowadays opening ramen shops and transmitting knowledge, skills, and professional contacts to young apprentices, creates a sense of community and constitutes a form of resistance to the corporatization of food production. Of course, the book also explores the origin and global success of instant ramen, assessing it both from the point of view of the Japanese cultural politics and the global trends and flows of goods.

Read together, the two books provide much information and great reflections about globalized food as we know it today. Furthermore, they stay away from an exclusively Western point of view, highlighting internal processes and dynamics that may be little known to those outside the communities involved.

Don't Even Think About Putting Ketchup On A Hot Dog