If you found a lost camera - forgotten on a bench, dropped in the street, or otherwise - what would you do?

Return it? Keep it for yourself?

In February 2008, I launched my blog, IFoundYourCamera.net, after being inspired by a secret that was posted on PostSecret.com which posts anonymous secrets received from all over the world.

The secret was a photograph of a group of friends sharing a drink on a patio. The text on the card read: "I found your camera at Lollapalooza last summer. I finally got the pictures developed and I'd love to give them to you."

I was inspired by the secret and decided to start a blog based around this secret. A few hours later, the blog was up and linked from PostSecret and I received 20 orphan pictures in the first day. 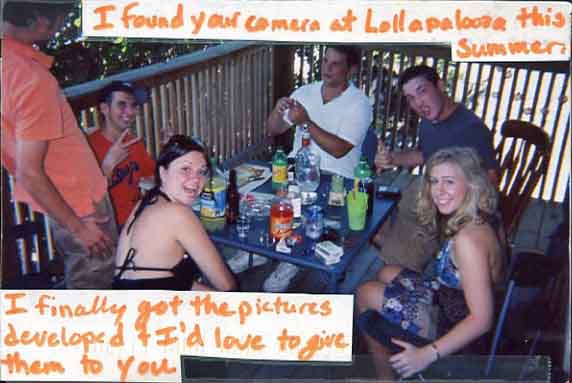 In the first weeks, I wasn't sure how long I'd keep running the blog for. I was getting a constant stream of photos filling up my email inbox, but only a couple of them had been returned. I was impatient and a bit disappointed that it wasn't as initially successful as I hoped it was going to be.

But then George came along.

George lives in Pennsylvania and last March pictures from his lost camera ended up in my email and so I posted them on the blog. George had lost his camera during Mardi Gras in New Orleans. Only a couple of weeks later, one of George's friends - who lives in Denmark - came across my blog and recognized George. Word of the lost camera made its way back to George who then contacted me. George's success story made headlines across North America in an article by the Associated Press. 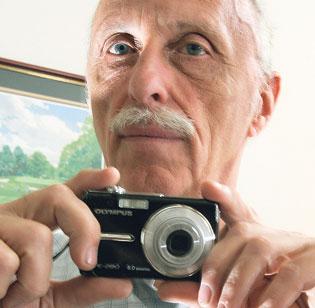 It's interesting that the people involved in reuniting this camera came from 4 different cities, 3 different countries, and 2 different continents. It goes to show you just how global the blog is.

Fast forward a year later, and here I am. I have received pictures from over 400 lost cameras from literally all over the world - Japan, Australia, New Zealand, Canada, Scotland, Germany, Italy, even Guam!

Thanks to the help of readers all over the world, the blog has been a continuing success and we have been able to help return 20 lost cameras. It has been viewed by nearly three million people around the world, and over 4800 people have joined the Facebook group. It turns out, a lot of people lose their cameras and many people are willing to help out total strangers in getting their lost items back.

Photographs are personal. They're snapshot memories that allow us to capture and relive moments from the greatest chapters of our lives. I think the pictures I receive speak to all of us in some way, because we can identify with the moment being caught - a wedding, a grad, a family vacation, or just having a good time with friends. The pictures remind us how similar our lives are, and I think that some of us (myself included) live vicariously through the images posted on the blog each week.

So what would you do if you found a lost camera? Would you take the opportunity to help a total stranger if given the chance?

Wondering about what's beyond the stars.