We never asked our server what E&O stands for; maybe we should have, because it may as well have been 'Excellent & Outstanding'. You never run out of a good restaurant in London and that's what we found to our surprise today at E&O. Just off the well-worn path that is Portobello Market Road is a line of little cafes, eateries and restaurants that were looking for business this sunny Saturday afternoon. While their contemporaries who had set up stalls on the oh-so-busy market road, some of these guys were twiddling their thumbs or just standing outside to take in the rays (they would probably tell you they were trying to draw in the customers to come warm the vacant seats in their restaurants).

So, what was it going to be today? Sicilian? Nah! Mediterranean? Nah! (Besides, wouldn't that be similar to Sicilian anyway?) How about a full English? Umm no! I've never really understood that term anyway; can you really get a 'half English' anywhere? If not, then why not just call it an English breakfast anyway? Europe didn't seem to be the way to go this afternoon and so we moved on to our next option, E&O. One look at the menu and we were hooked. Now, I have to admit that my wife and I are addicts when it comes to dim sum anyway, so seeing dim sum and Asian food presented with a new twist definitely got us excited. We didn't even have to ask each other whether we wanted to try it out; "let's go", we almost said at the same time.

Seated quickly, we were ready to dig in. And we were so hungry, we could have almost asked our server to bring one of everything on the menu. (To be honest, at the end of the meal, it almost did seem like we got one of each item on the menu... or close to it). We did struggle for a moment because it all looked so good, but then our hunger got the better of us. All said and done though, my wife was obviously more organized in her thoughts and knew what she wanted... "I want to try the pumpkin and miso gyoza... it sounds interesting." That usually means, "I've figured out what I want to eat, and now it's your turn."

Decisions, decisions, as they say. There was prawn, there was chicken, pork... tofu. We asked our server for some recommendations, but for the most part trusted our judgment and tummies. We opted for the 'chili tofu, nasu dengaku' which I needed to Google to find out what exactly it was. Saving you the trouble of having to do that, it is a traditional Japanese style of cooking eggplant with a miso glaze. Now, E&O, in their innovative style cooked the eggplant as it probably should have been, mashed it up and served it in a cone of miso leaves. This was served as the base for some shallow fried chili tofu. The tofu, delicately flavored with some Asian spices and chili gelled perfectly with the sweet miso and eggplant at the bottom... it just created this amazing mix of flavors that danced with joy on your tongue. The bite was small enough to take it all down in one go, but you wanted to keep going back for more. Too bad there were only four of these on the plate (or maybe it was a good thing, given everything else we ordered). I'll come back to the rest of the lunch, but this for me was the highlight of the meal, bringing to the fore the chef's creativity and ability to bring together a range of flavors and make them work so beautifully. Often, in the name of innovation, chefs try to be creative with their cooking and miss the mark. Thankfully, the chef at E&O was not one of those.

For the appetizers we also ordered a pumpkin and miso dumpling; once again, the star in this dish was the miso. It really did outshine the pumpkin and bring a sweet and rather unique flavor to the dumpling. The other appetizer was the crispy pork belly in black vinegar. This dish, which should have had a lot of potential, a lot of flavour, was a big let-down. While the pork belly was well cooked with a crispy top and soft bottom, the black vinegar sauce was poor. There was almost no flavor to it (or our palettes were now so blown away with the other flavors that we couldn't taste them in this dish anymore). The chef could have opted for a sauce that was as bold as the pork; something with a bit of spice, maybe some tang, or maybe even some sweetness (don't apple and pork go together?). The vinegar just didn't do the trick. Both, my wife and I are big pork fans (I mean, who doesn't like pork?), but we were both left wanting a lot more with this dish.

As we moved down the menu, we stopped at the tempura... after all, who doesn't love a bit of fried stuff in their meal? It was toss-up between the 'king prawn, shiso and lime salt' and the 'wild pink shrimp, spicy mayo'. Sensing our confusion, our server recommended the latter option; I love the little pink shrimp - their flavors are good, and you will enjoy the kick in the spicy mayo. She was spot on: The little fried popper kind of shrimp were just beautiful. You could keep popping them in your mouth; they were that addictive. The shrimp were beautifully fried, not too much of batter, with a hint of soy sauce and Asian herbs and spices. The spicy mayo was unique; it definitely had a kick to it and complemented the shrimp nicely. It may have just been a mix of mayo, ketchup and possibly Tabasco, but it was genius... Another bit of creativity by the masters at E&O.

You'd think we would have had enough by now, but we were only getting started. It wasn't only the fact that we were hungry that kept us going, but also the taste party in our mouths that was encouraging us to order more. After all, we were only halfway down the menu yet. Next up for us was an order of the Singapore Noodles, which interestingly was placed in the category of sides. When it was served up, stylishly I might add in a rough edged black plate, it looked like anything but a side. Beautifully wrapped up in a circular form, coated with some lightly spiced red peppers, fried egg and pork, the Singapore Noodles would have made their countrymen (and women) proud. I don't think anyone in Singapore could probably cook these noodles any better; in fact I am fairly certain that during my time in Singapore I didn't taste a better version of these noodles.

Last up was... not dessert... Not yet though at least. One other side that caught our fancy was a 'corn on the cob, kim chee chilli mayo'. More intrigued than hungry, we ordered it up. How do you cook corn on the cob kim chee style? Leave it to the folks at E&O, I would say. The corn, grilled as one would any normal corn on the cob was coated with the same spicy mayo I raved about earlier. While not really kimchee style, I have to admit I wasn't complaining... I had enjoyed the mayo so much the first time around that I didn't mind a second stab at it. If anything, I wanted more of it on the corn... Maybe more on the side of every dish served that afternoon... and then possibly some to take home as well... Pretty please? 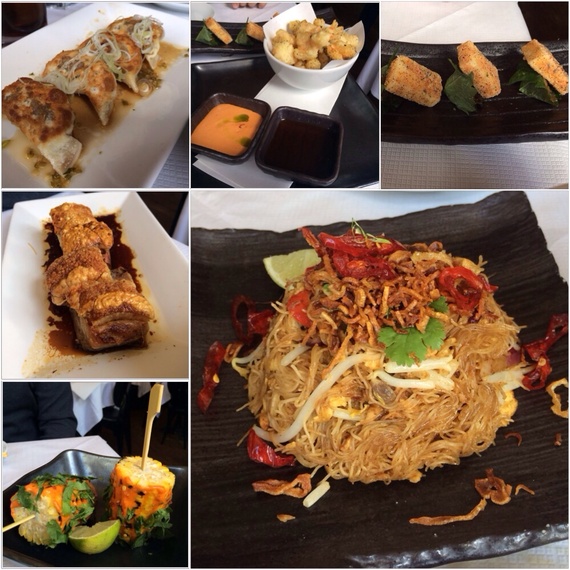 And that's it. We couldn't eat any more. Our stomachs had had enough. Even though our eyes were still roaming up and down the menu, we couldn't take it anymore. Someone would have to roll us out of there if we kept going at that rate. I have to stay this was one of the better restaurants we have stumbled upon recently. Full credit to the team at E&O - the chefs for their bravado and creativity with the use of the ingredients and flavors, and also the staff who to their credit are extremely knowledgeable about the food that is being served there. Keep going at this rate and I don't know why people wouldn't just really start calling you 'Excellent & Outstanding'!