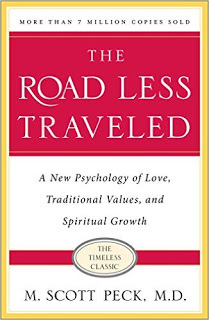 Canto I of Dante's Inferno begins, "Midway upon the journey of our life/I found myself within a forest dark, For the straightforward pathway had been lost." Robert Frost's "The Road Not Taken," which informs the title of the bestselling self-help book, The Road Less Travelled by M. Scott Peck begins, "Two Roads diverged in a yellow wood, And sorry I could not travel both/And be one traveller..." And then there's the famous Yogi Berra quote, "When you come to a fork in the road, take it." All three compare the passage of life, along with its signposts and watersheds, its life changing decisions, as a road or path. Even though Dante wrote in the 13th Century and Yogi Berra and Robert Frost in the 20th, all three present a rather l9th Century idea which could easily be the cover of a Thomas Hardy novel. You imagine your voyager with his cloth bag tied to the stick held over his shoulder and climbing the path which leads atop the promontory from which the specter of the future, usually taking the form of a hamlet from which a church spire rises, is an apparition come to life. In Eastern philosophies the path is known as a "Do" or way and has metaphysical significance to the extent that it refers to a state of enlightenment, which can be known as Satori or Nirvana. In our materialistically oriented society, to quote Gertrude Stein, a "Rose is a rose" and a street, or roadway, whether it's an Interstate or Route 1 is merely just a means to an end. But every once in a while, the traveler finds respite from the cudgel of his end and like that character in the l9th century novel with the sack slung over his or her back, has a chance to stand apart and take stock, to enjoy the broader view which momentarily allows him or her to appreciate where they are really going. In the famous Twilight Zone episode "A Stop at Willoughby" the main character a harried advertising executive, who increasingly feels like a rat on treadmill, momentarily finds a respite from the grind, in the form of a utopian way station, a vision of the past in the form of small town life at end of the l9th century. The only problem is that it's a vision that takes place at the moment of death.