When I was a freshman in college I moved into the international dorm and was faced with people from around the world who spoke English better than I. Many of them frequently used vocabulary twice the size of my own. As I began the novel The Two Krishnas, I was reminded of this as I was struck by the book's evocative, lush language and deeply detailed description by its Indian-American author, Ghalib Shiraz Dhalla. Within a few pages I was hooked on this richly told story. 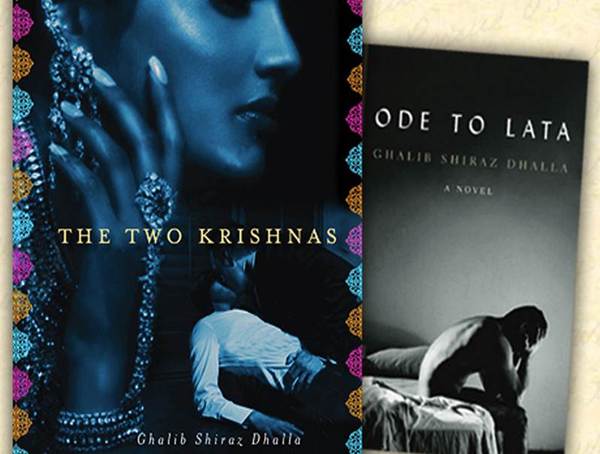 The Two Krishnas is simply one of the best books I have read in my life -- I can hardly wait to wade into the author's earlier Ode to Lata. Photo courtesy of the author.

First and foremost, as a Japanese literature major years ago, I know a little about the craft of fiction. Ghalib's writing is phenomenal, placing him in the pantheon of my favorite social realists, such as Pramoedya Ananta Toer of Indonesia, Haruki Murakami of Japan, Korean-American Chang-Rae Lee, and Shyam Selvadurai of Sri Lanka -- even Chinua Achebe of Nigeria. 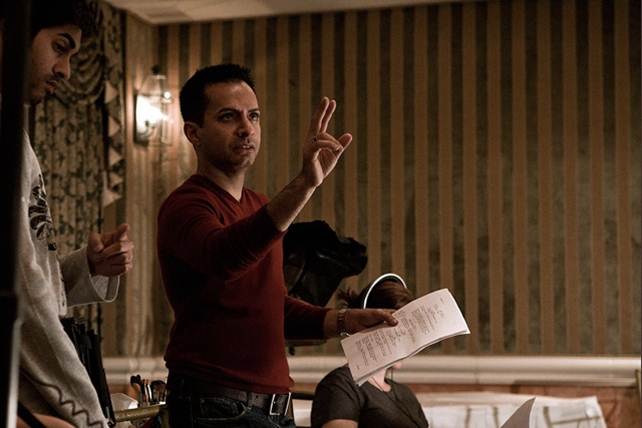 Ghalib directing his film "Embrace." Photo courtesy of the author.

I have not wept over a book since the hotel bathtub scene in Khaled Hosseini's The Kite Runner. Ghalib so engulfed me in his complex narrative of human emotions, culture, commitment, and human sexuality that I reached the first dénouement of events during rush hour on the New York City subway. Fellow riders looked on with concern as I burst into tears at Herald Square! 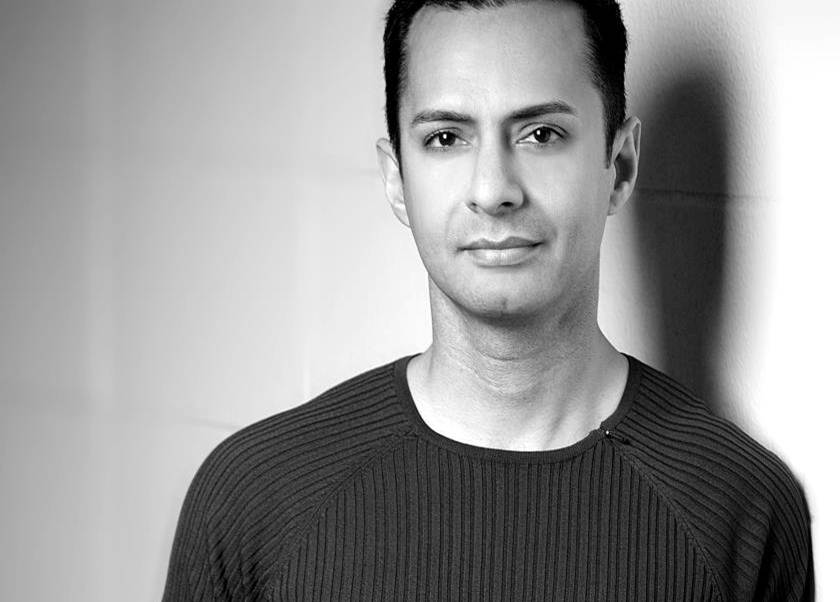 I imagine myself to be something of a novice author, but Ghalib's masterpiece makes me realize the vast difference between good and great. I look forward to reading the author's first novel, Ode to Lata. Ghalib is also a brilliant filmmaker whose film, Embrace, I reviewed in the spring. The short, now being developed into a feature length film, was written, produced, and directed by Ghalib and is about four intimate love stories set against a backdrop of actual terror events.

Arranged marriage, romantic marriage, gay marriage, relationships, family -- each difficult to grasp in all their complexities -- are the glue that binds The Two Krishnas. In so doing, Ghalib has crafted one of the most intelligent and sophisticated works I have ever read. His characters quote liberally from the poetry of Rumi and discover, along with the reader and sometimes too late, how spirituality is more about following the path of truth instead of cowering to expectations and misinterpreted religion.

The novel, told from three different perspectives, brings us on intimate terms with the betrayed wife, philandering husband, and his lover. The consequences of being dishonest or accepting their true natures, their hopelessness in the face of what they desire, and the lengths to which they will go to preserve what they hold sacred is what makes us root for each of them, even as we know, on some level, that things cannot turn out well. Consider Pooja's denial -- a betrayed wife willing to overlook everything to keep the façade of her marriage and home intact:

She felt him standing there, both of them feeling like fugitives who had run from the truth for too long. Pooja drank the air deeply, wiped her eyes with the end of her chunni, and went straight to the sink where she started to vigorously wash the greasy crock-pot with a sponge. She would not make a scene. She would not let them dishonor themselves in this way despite what he had done. She would remain strong, elegant, magnanimous.

It would be simpler if her husband, Rahul didn't love her. But herein lies the pinch and complexity. Their connection, one that may be devoid of the passion he feels for his lover, is palpable and even deepened by his transgression:

Why now was he missing the fragrance of her freshly washed hair, peonies and vanilla, when she gave him a hug or leaned over his shoulder at the table to lay down breakfast? He saw her sleeping alone, now, still sticking to her side of the bed, turned away from his side as if afraid to look at the vacancy there, lonely and wondering about him. He was connected to her in a way he wasn't when he was sleeping besides her, more there now than he had ever been.

Then there is the lover, who after being disowned by his own family, has found in Rahul, not only a father figure, but also compensation for the alienation that being an illegal immigrant in the "land of the free" has brought:

Atif clasped Rahul's hand tightly, held it close to him, against his thudding chest, as if in that grip they held a common heart. He shook with grief, his tears unbounded. He cried now not only for the love that he knew Rahul felt for him, but also the loves that he had lost, for his mother and father, all the rejections he had suffered up until now, and the realization that when at long last, love had arrived, it had been so that he would be able to neither claim nor keep it.

I sat next to Ghalib at a dinner this spring for the Indo-American New York Indian Film Festival at Essex House on Central Park South. He confided to me, "This is a cautionary tale for the women of the world who may find themselves involved with or married to a gay man, as well as the men who think they can ignore their true nature to play normal." My minister came out from the pulpit to the surprise of his wife who was in the front pew -- this is a very real challenge for many. 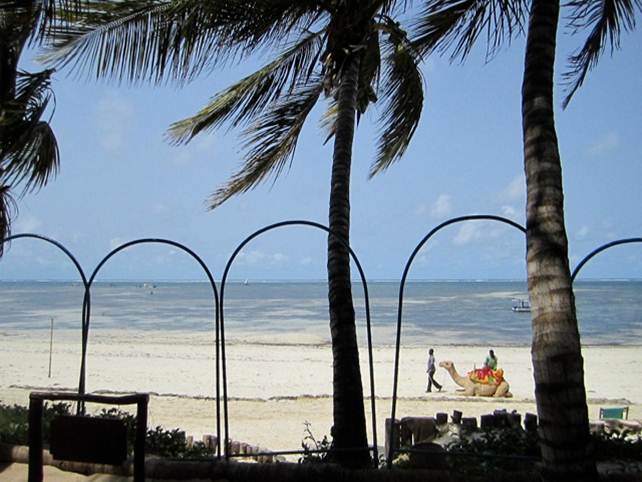 I reached out to Ghalib and he told me:

As a writer, I wanted to expose the catastrophes we create when we lie to ourselves and to those we love; how we are completely helpless and equalized in the face of desire. Hindu, Muslim, straight, gay -- it doesn't matter. Ultimately we all want the same thing -- to be loved and accepted. But in a world where we are unable to get past such differences, where we judge desire as unruly or unnatural just because it's different from ours, we become complicit in the resulting tragedy.

Oppressors love to brandish religious dogma to justify their intolerance, but a careful analysis of theology serves up a surprisingly tolerant and spiritual take that has been deliberately or inadvertently ignored.

The Two Krishnas, while letting us live intimately in the minds of the betrayed wife, her husband and his lover, explores the progressive nuance of religion, the complexities we've overlooked in our lust to condemn those who are different from us.

Along the route, the cross-cultural author traverses the chasm of culture, be it Indian, American, or African, straight and gay, male and female, Muslim and Hindu -- even haves and have-nots. His dialogue between Hindu and Muslim lovers trying to understand each other's concept of "terrorism" was exemplary. As a New Yorker, for me the book presents my first truly favorable impression of Los Angeles, where the novel takes place. 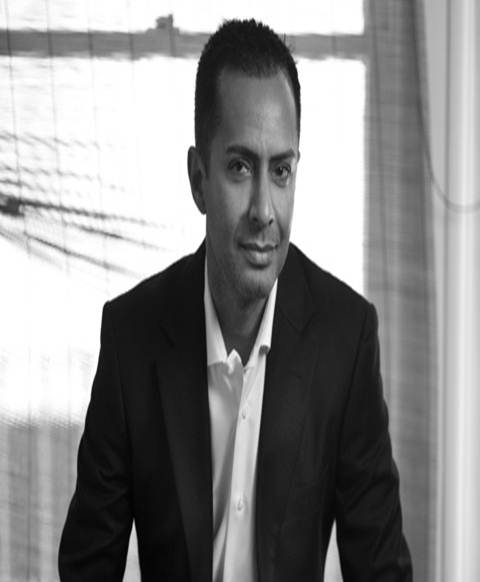 Ghalib wrote me on the complexities of the closet:

The closeted husbands of this world feel it necessary to enter into what society has decided is normal, to shun what is natural to them because they've been brought up to believe that desiring a same-sex partner is a sin and something to be ashamed of.

When we encounter women -- a sister, an aunt, a girlfriend -- who is devastated because her husband has decided to come out of the closet, sadly too late in life and having already involved others in his lie, it's important to realize that we, as a society, have enabled this deception.

By creating a world where we refuse to let others live their lives honestly and have the same rights, we create the "closet" and a stage for deception. Nobody is innocent.

Born in Mombasa, Kenya, Ghalib writes as a thought leader and global citizen in ways that create dialogue, diversity -- as well as excitement for the written word. He has done as much to build bridges for his readers to cross as any author I have encountered. Last year Ghalib was honored at the prestigious Master's Tea at Yale where he spoke with some of the brightest, most talented students, discussing his writing, film work, and the intersection of LGBT and Asian American cultures. 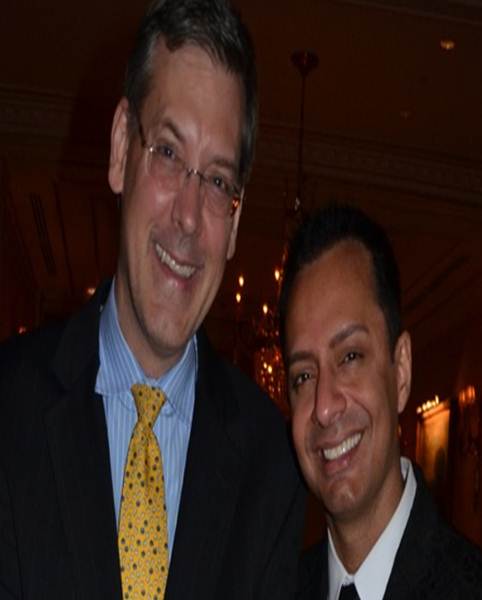 The author with this author, Spring 2012. Photo: The Stewardship Report.