I'm writing this blog in silence, or relative silence, for the only sound I can hear is the hum of my refrigerator and the occasional swooshing sound of cars on the street in front of my condo complex. It's Sunday and I like the quiet.

I don't like loud voices in public places, or mindless chatter that disrupts my conscious awareness, or white noise filtering behind me at bars and usurping the conversation I'm having with my companion. In the film business, ambient background sound is or walla walla. It's not supposed to be intrusive. 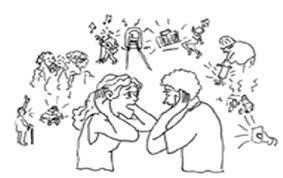 My friend, Russell, told me a story recently. He was flying from St. Augustine, Florida, back to Austin, Texas. It should have been an uneventful two and a half hour flight, however, as soon as the plane took off, Russell heard a loud voice from several rows behind him. A man was on the phone talking about business. Everyone could hear him.

"He couldn't have been on the phone," I told Russell. "You can't use phones when flying on a plane."

A year ago, Russell had permanently returned to the U.S. from a 22-year stint in a Middle Eastern country where he had worked as a dentist. Of course, he had visited the U.S. in the intervening years, but he found all the technology, including the obligatory computer, to be annoying. He also thought the American culture was brass and cluttered with mindless distractions.

"He was on the phone, I tell you, Fran. And he was loud and intrusive and no one cared how important he thought he was or how smart he was at conducting business." Russell sighed. "And it went on for two hours -- the entire flight."

"He was probably on the internet -- on Skype. I get it. A plane is not a business office. On the other hand, maybe you should've become a Buddhist monk after all," I quipped.

He went on: "And then when the plane landed and the pilot said we were going to be sitting on the tarmac for about a half hour, it seemed as if everyone on the plane took out their cell phones and began to talk loudly to whoever was picking them up. Fifteen minutes later the pilot said we were proceeding to the gate, and everyone started calling again and speaking even louder. We pulled up to the gate and it all started all over again with cell phone calls."

As Russell relived this experience of intrusive noise into his personal space, I could completely relate to his angst. I have the same frustrations, the same extreme emotional discomfort with noise. I encounter this kind of social rudeness throughout my week. Music, loud talking, pushing to the front of the line -- all negative experiences in our culture. And, when I finally encounter stillness, I'm so aware of the positive impact of silence on my being that I smile and breathe deeper with peace.

Russell went on to the make the point about cultural norms and the ethos of remaining quiet and respectful in over-crowded countries like Japan, even China, and Scandinavian countries whose people are not intrusive and demanding of individual attention. Loud conversation draws attention to the speaker. It says, here I am; look at me; respond to me; I'm important.

Have we always been a country infused by noise, impervious to sounds and vocal intrusions that hurt the ear, cloud our thinking, and make us physically uncomfortable?

Since I am aware of intrusive noise, particularly the kind of background noise that has no purpose, music that pounds and throbs and makes me shake my head to ward off a headache, I have developed coping skills to help reduce the ill effects of the tyranny of noise.

Here are 3 ways I try to push back on the cacophony of sounds in my immediate environment. These are simple suggestions, but, nevertheless, they can put you in the mindset of control.

1. Use Earphones
More times than I can count, I've encountered loud conversations in planes, two women talking mindlessly about other people, celebrities, movies, or a businessman giving unending advice to his seatmate. Lacking awareness about other people's personal space or feelings is rude and unconscious. I never mind when conversation that is quiet and brief. If it is prolonged and vocally intrusive, I always have a set of earphones at my disposal. I put on a meditation tape or listen to classical music. Both calm me and take me away from the white noise.

2. Use Earplugs
I love reading on a plane. It's sacred time. I get to be left alone because I'm under no obligation to speak to anyone except to be helpful. But when there are conversations going on, I put in my earplugs and tune out the world. I'm in control of that world and I can choose not to connect with others. Sometimes I get a dirty look when someone wants to start a conversation and I don't want to engage, but moving into my own stillness takes the tyranny of noise out of my purview.

3. Breathe/Meditate
If you forget your earphones or earplugs don't panic. First, tune into the noise around you. It acts like an establishing shot in a movie. Mindfully, begin to isolate the loudest or most obnoxious noises, and, with intention, put the annoying sounds in an imaginary rose in front of you and blow up the noise. Do that successively with the rest of the annoyances until you have isolated a sound or two, and put that sound(s) some place on your body: between the brow, your heart, your throat, the crown of your head. Breathe into that sound and meditate on it until it eventually goes away.

You have the ability to control your environment even when that environment is intrusive and negatively affects your energy. Your mind can either buy into the chaos around you and tyrannize your best instincts, or your mind can make an intention to direct your energy in a positive way so that you will be at one with your mind, body and spirit.

60, Sex & Tango, Confessions of a Beatnik Boomer
by Joan Moran

I'm The Boss of Me! Stay Sexy, Smart & Strong At Any Age
by Joan Moran