As a black educator -- and the proud daughter of two immigrants who always remind me that my family climbed out of poverty on the rungs of an education -- I have nightmares when I think about what schools might have looked like if the courts hadn't "butted into the business of public education." Historically, it has been the courts that have forced lawmakers and citizens to have a brutally honest conversation about race, class and equity in public education.

One might even argue that these early equity conversations began in California's classrooms and courtrooms.

Almost a decade before the landmark Brown v. Board of Education, a group of Mexican-American students and their families filed suit against schools in Orange County, California arguing that the notion of "separate but equal" inevitably promoted inequality and social inferiority. The point these families made was that even separate schools offering comparable resources, instruction and access to qualified teachers promoted "social inferiority" that could hold children back in profound and permanent ways. The judge sided with the plaintiffs, whose case was supported by Thurgood Marshall, the NAACP and other groups, effectively laying the groundwork for Brown v. Board of Education, which successfully argued that separate education was inherently not equal, and therefore unconstitutional.

Fast forward to 2014, where the controversial Vergara lawsuit has inspired a heated debate about the role of litigation in our school system. Some opponents of the Vergara ruling argue that public education -- particularly issues as complicated as California's laws on tenure, staffing and lay-off policies -- should not be discussed from court benches by judges and lawyers who are far-removed from the complexity of the classroom. Others believe legal scrutiny is precisely what makes education a truly public and democratic institution. Whether you agree or disagree with the ruling that found several facets of California's education code in violation of equal protection, court cases like Vergara force us to have pointed conversations about education and justice.

Today, we would be hard-pressed to find a state or district willing to argue the morality or efficacy of legal segregation in our schools. And yet, those same schools remain deeply segregated: we continue to see our poorest students attending the poorest-performing schools. While the reasons for the problems facing public education are nuanced and complex, the inequity is as clear and gaping as our student achievement gaps. And, for as long as we continue to operate separate and inequitable schools in America, we can and should expect lawyers, students and their families to bring their voices, concerns and cases from the classroom to the courtroom.

Over the next few weeks, Educators 4 Excellence-Los Angeles will be sharing some teacher perspectives on the landmark Vergara court decision. But as an organization comprised of over 3,300 California teachers, we thought it only appropriate to start with a history lesson to ground us in the context and background of this momentous case. While the Vergara ruling is an isolated case with very specific legal implications, it is part of an ongoing statewide conversation between our legal and public education systems.

As the timeline shows, our courts have long been building a case rooted in the fundamental right to an equitable and quality education for all students. Most recently, the courts have been debating if specific state or contractual policies undermine our ability to deliver a quality public education. 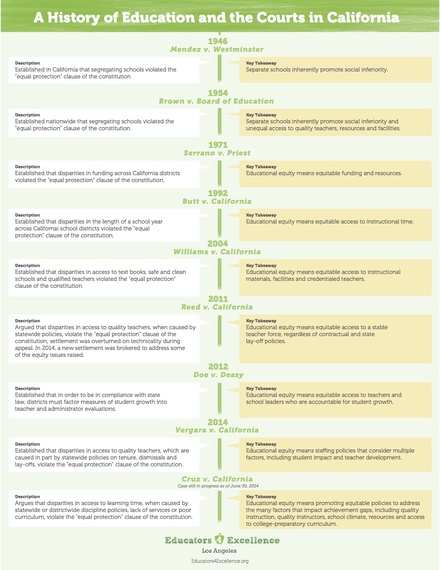 As I reflect on this timeline, my fear is that when the dust settles from the appellate courts and the media fanfare dies down, we will not have mustered the political and moral will needed to truly address educational inequity in California. My fear is that we will, instead, engage in more feel-good conversation about poverty or, alternatively, a righteous game of blaming lawyers, funders, unions or judges. Neither has proven to advance equity for kids.

What gives me hope, however, is our teachers -- those courageous advocates for the students within and beyond their classroom walls. As I think about this timeline, I am reminded of the teachers and leaders at Educators 4 Excellence who are publishing policy papers, leading discussion forums, authoring op-eds and bringing their ideas for education equity into the hallways of our district, union, court houses and legislature. These teachers are bridging the gap between the courtroom and classroom by bringing forward-thinking policy ideas and an unwavering belief in the potential of their students and their profession.